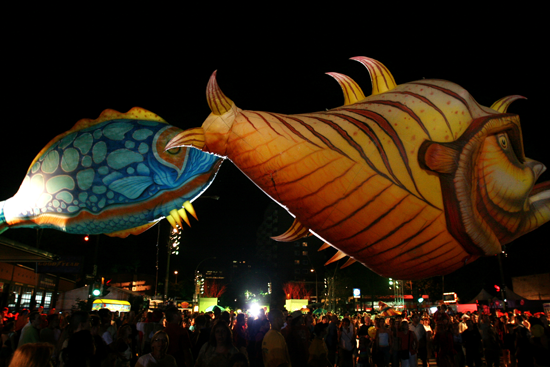 "Pearl: Secrets of the Sea" will be staged Thursday at Artpark in Lewiston. (Photos courtesy of Plasticiens Volants/Artpark & Company)

Plus, The Machine performs Pink Floyd

Artists, sculptors, Dylan, aerial fairies, the BPO, whatever it was that Ted Nugent did on stage – just when you thought you’d seen everything at Artpark, in floated dragons, flying fish and enormous eyeballs.

Two summers ago, the French street theater group Plasticiens Volants wowed people when it debuted “Big Bang” Lewiston. The troupe told a story of creation through a dazzling mix of floating inflatables, videos, lights and music. Its colorful creations filled the night sky, and were manned by performers weaving in and out of the crowd.

Artpark & Company Executive Director Sonia Kozlova Clark said, “We had several thousand people, which was unexpected. I was very, very pleased to see the crowds that we did see. And I heard over and over from people, ‘This is the best thing I’ve ever seen. This is incredible. I didn’t expect anything like this at Artpark. Please bring them back.’

“It was just stunning, I think for everybody, and also I was very, very encouraged that everybody understood the message and style and the work of art behind it.”

She added, “As they were leaving, we all agreed that they definitely will be back.”

The time has come, and Plasticiens Volants will return to Artpark on Thursday, Aug. 22, with a new show: “Pearl: Secrets of the Sea.”

In a press release, Artpark & Company noted “Pearl” is, “A truly immersive performance. The show takes place above, next to, and in front of the audience as the actors manipulate the giant inflatables through the crowd.”

Artistic directors Marc Bureau and Thierry Collin recently told the Cultural Services French Embassy in the U.S., “The show recounts the journey of a pearl escaping from its shell, an adventure full of discoveries and dangers. Our objective was to create a story for all audiences, ‘familial’ and foremost poetic by transforming the area into an underwater space. The audience was, and still is invited to immerse themselves in our large aquarium. The show ‘Pearl’ evokes a part of the beauty of the world, encouraging people to preserve it.”

Clark elaborated a bit more. She said, “There’s a little pearl that goes out into the world to explore, and she gets taken over by an evil snake. There are many characters that represent the sea world. And there’s certainly tensions, and relationships, and things happen. I don’t want to tell the whole story, because you really want to be there!

Plasticiens Volants made its U.S. debut with the “Big Bang” show at Artpark in 2017.

“It’s a special place. ‘Big Bang’ is a story of the universe, so near Niagara Falls we’re in nature,” Bureau and Collin said in a phone interview from France. “The place of Artpark is nice to have a show in because, with the nature around, it’s a good fitting with our show. We can use all the place for the operation of the inflatables. It’s a nice place to perform.”

Plasticiens Volants scouts out show themes that tie together storytelling plus the “magic” of flying inflatables.

“Each show is a long story before performing. Usually, we begin by choosing a story. … Like the sea or the birds or the birth of the world, like for ‘Big Bang,’ for example. We work on some universal tale,” Bureau and Collin said. “After writing the story, we have big work for the perfection of the inflatable. We make some maquettes, and after we draw the shape of the inflatable by computer. And after there is big work of painting the inflatable; and after some rehearsal. So, we work six months – something like that – before playing. Six months or more. To build an inflatable, we need two months or three months.”

“The creators were here with the show and they couldn’t have been more pleased that finally it was where it was meant to be, because they usually perform in city plazas. But to be so near Niagara Falls, in this fully natural setting, this is the triumph of nature and the universe. It was amazing.” 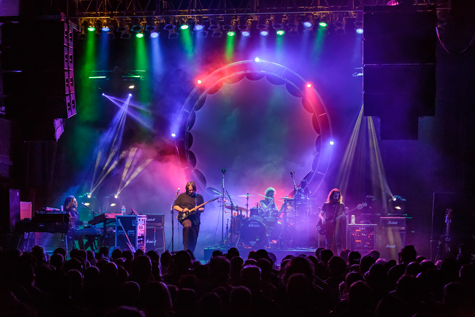 The Machine will perform 30 years of Pink Floyd at Artpark. (Image courtesy of Artpark & Company)

Welcome Back The Machine

When one thinks of Artpark, the thought is often related to music.

Similarly, when one thinks inflatables and aerial artistry, they often recall Pink Floyd.

So, if you have a show like “Pearl,” which is so big, and so visual and colorful, then why not pair it with “Another Brick in the Wall” or “The Great Gig in the Sky”?

“Yes, that was the idea!” Clark said of booking The Machine to perform Pink Floyd songs before and after Plasticiens Volants.

“It was like, ‘We’ve got to do this,’ because some people are already commenting they’re thinking it’s the same show. It’s not quite,” Clark said. “They will collaborate in how things transition, into The Machine set, then into the Plasticiens Volants set, and back into The Machine set. But each will have their own show.

“But people are assuming that, of course, Pink Floyd uses all these inflatables all the time, so it must be part of the show. It’s a perfect fit. And The Machine, they’re so excited about this. They’re so looking forward to this. It’s just perfect.”

It’s been seven years since The Machine founder and frontman Joe Pascarell performed on the Artpark Amphitheater stage.

“I can’t even express how excited we all are,” Pascarell said in a phone interview. “When I saw this date on the schedule, I immediately called Tahrah, the drummer, and expressed my excitement.

“We’re all so excited. I mean, we loved playing there.”

The Machine would return to perform in Western New York following that Artpark concert, but without Pascarell. He needed a break to pursue other opportunities.

“I was leaving the band and I did leave the band at the end of 2012,” Pascarell said. “And my first year off was, to be honest, it was great. And then it went downhill after that first year (laughs), and I missed it terribly. I mean, more than I even could have imagined.

“I didn’t say anything, because I made my decision and I was gonna live with it. But, when Adam, who had replaced me, said he wanted to leave, they approached me and asked me if I wanted to come back. And that’s when I then expressed, ‘Why, as a matter of fact, I would love to come back.’ I’ve been back now for almost three years.”

Pascarell said his time away from The Machine altered his approach to performing and how he goes about staging each concert.

“It changed almost everything that could be changed,” he said. “I mean, my perspective now on it is completely renewed and different.

“You know, it’s hard to express. I was in The Machine my entire adult life – you know, it was kind of all I knew as a working, performing musician. So, I didn’t really know my life without The Machine, which was partly why I wanted to leave. And now that I’m back, I really have a new appreciation for what I do for a living; and how important it is to me; and all the things that I get from it – in every way.”

What Artpark fans will get from Pascarell and The Machine is a meticulously crafted tribute to Pink Floyd.

“What The Machine brings to the stage is something I think would be really hard for other musicians to bring, which is that we’ve been doing it for over 30 years,” Pascarell said. “We have so much time on stage together, playing for people, and we’ve been doing this for so long, it feels like it’s our music. Of course I know it’s not; but we have thousands of hours playing that music together, on stage, and it’s really hard to match that.”

In addition to top-notch musicianship, The Machine also presents the “Interstellar Light Show.”

“From the very beginning, we’ve always tried to put as much as we could into the visual aspect, because I think that’s something that Pink Floyd did,” Pascarell said. “Pink Floyd was a multimedia band before the world of multimedia even existed. They’ve always done that, and I think that’s something that’s integral with that music. And we’ve always done that. And we will be bringing as much electronic and laser and light as we can fit on the stage.”

Accordingly, Pascarell said The Machine is – as Clark said – the ideal fit with “Pearl.”

“It sounds super-interesting to me,” he said. “And you know, Pink Floyd is a very visual thing. In addition to the lights, the music – it just conjures up images and imagery. And it’s artsy. It sounds to me like it’s gonna be a good fit – a nice back and forth.” 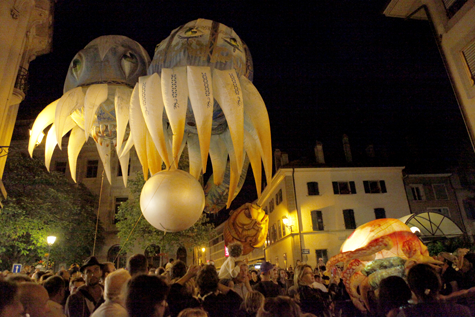 Headed to the Show?

The Machine will perform their first set at 7:30 p.m., followed immediately (no intermission) by Plasticiens Volants’ presentation of “Pearl: Secrets of the Sea.” The Machine will then stage a second set, complete with that (inter)stellar light show.

Artpark & Company Director of Communications Maria Hays said, “This show is different from ‘Big Bang’ in that everything will take place in the amphitheater. The Machine will perform on the amphitheater stage and then ‘Pearl’ will take place on the flat pavement area in front of the stage. There is no moving to a different location for Plasticiens Volants’ performance like we did for ‘Big Bang.’ ”

Furthermore, Hays said, “Tickets are all general admission. Chairs will be permitted in designated areas (to leave room for Plasticiens to move through the standing crowd).

“Although there is ample handicapped parking in all lots, it is recommended that patrons with mobility challenges park in the upper parking lots (accessed via the Portage Road entrance), as Artpark offers a complimentary shuttle service – to and from these lots only – for the duration of the event.”

For more information, or for tickets, visit www.artpark.net or stop by the box office at 450 S. Fourth St., Lewiston. 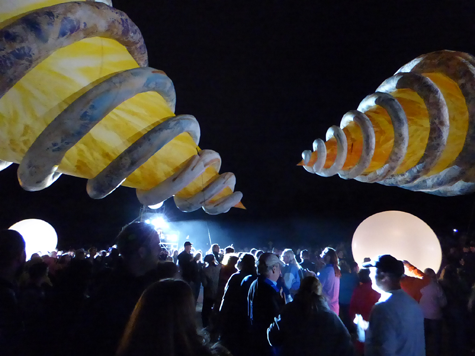 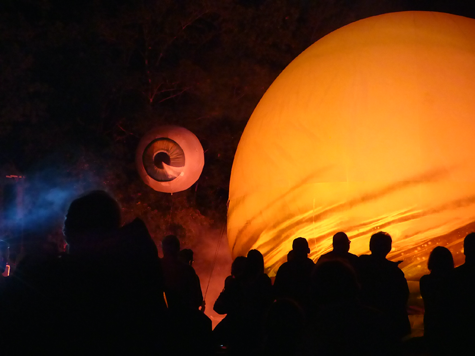