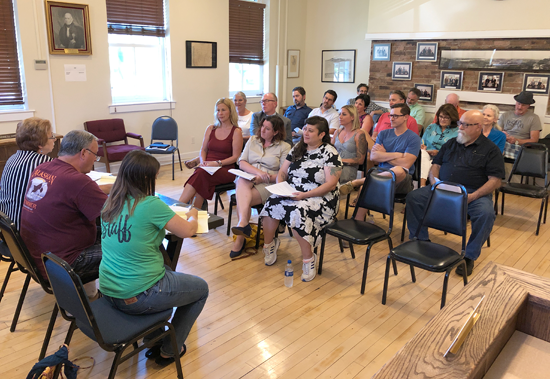 Lewiston, as a work of art: Artist group looks to connect with Artpark, Destination Niagara, Greenway

Village Mayor Anne Welch assembled a group of artists in mid-July with the intent of promoting Lewiston as an arts destination. They met again on Wednesday – this time with some notable additions – looking to implement strategies to increase public awareness.

Artpark & Company Executive Director Sonia Kozlova Clark and Director of Visual Arts & Family Programs Tanis Winslow said their organization is an arts hub. They encouraged the group to work with them on creating events and promotions.

“We have lots of resources to offer; we have lots of programs to offer; we have abilities for fundraising; we have, certainly, a lot of connections in the arts world; we have a very vibrant program at the moment with both local artists and international artists and national artists,” Clark said. “So, it just makes sense for Lewiston, the village, and Artpark, to finally come together and start working as one.”

Winslow said, “I have always felt … that every single one of us here probably has a memory from experiencing something at Artpark. Being a part of some kind of art experience, a storytelling place, a cooking workshop. … I can remember making stuff at Lew-Port to have at auctions at Artpark when I was a kid.”

She added, “I feel like I found my love for art at Artpark.” However, “Somewhere along the line – and I don’t know where it happened – but Artpark hasn’t been connected to the town in almost the entire 19 years I’ve worked there. That feels not good to me.”

Winslow added, “It’s really important to me – and I hope it’s important to all of us here – that we get that connection back and build that relationship back again.”

Clark said Artpark & Company is concurrently working on a master plan to envision what can be done within the state park, as well as a National Endowment for the Arts “Our Town” grant application.

With the master plan, the goal is twofold, Clark said: First, to “hopefully, eventually, expand to a 12-month cycle.”

“It’s a very large plan; very far-reaching,” Clark said. She added, “Our main focus is, of course, on the arts.”

Secondly, “What we also need to do better – both on your end and our end – is connect. How do we bring village residents into Artpark?” Clark said. She noted the venue offers an assortment of free arts and crafts programming, in addition to youth camps – but “90% of our kids come from Buffalo/Niagara.”

The NEA website states the “Our Town” grant, “support projects that integrate arts, culture, and design activities into efforts that strengthen communities by advancing local economic, physical, and/or social outcomes.”

“This grant is made for us – it’s made for Lewiston and Artpark,” Clark said.

She spoke with Michael Hibbard about Artpark & Company creating 3-D art pieces that would spread into the village. (See related cover story on Fourth and Center streets development.)

“Michael has really good ideas. We’re thinking that, visually, there’s a way to connect us also through the visual arts installation,” Clark said.

She is looking into artists capable of coloring Artpark’s main parking lot in a manner similar to the Gene Davis “Niagara 1979” “Painted Parking Lot,” which is right below the red brick roadway.

“That could also connect with Lewiston through the (adjoining roads). … There could be some visual signposts – some symbols,” Clark said.

In fact, one notion strongly praised at the meeting was the idea of using works of art – instead of traditional signs – to direct people around town. 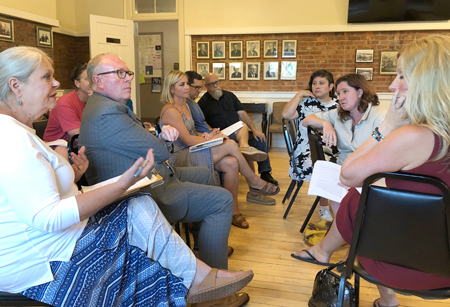 Village of Lewiston Trustee Claudia Marasco said Artpark & Company would gain points with locals if it did a little more to welcome residents – whether it be some sort of cookout or even a discount on event concessions.

Inspirations on Canvas owner Kathy Pignatora said Lewiston retailers would benefit greatly from Artpark & Company promoting a “shop local” theme to its thousands of concertgoers – many of whom are tourists. Pignatora said this would be most beneficial on “Tuesdays in the Park” nights when traffic-jam-fearing concertgoers often look to get in and out of Lewiston as quickly as possible.

Clark said the master plan would outline ways in which Artpark & Company can steer eventgoers to shop and dine locally.

She welcomed the community to get involved with Artpark programming, and reminded the room of recent productions where Western New York music groups, nonprofits, and River Region students joined professional actors on stage and in concert.

Clark said, “I think it’s important that Artpark is at the center of this” push to promote the local art community.

“If they know, and you make it special, my students wouldn’t miss that,” she said.

Lewiston Council on the Arts Artistic Director Eva Nicklas said, “It was Lewiston-Porter kids that did those fish up by St. Mary’s.”

“Arts and culture fall very heavily in our branding, and our research and in everything,” he noted. “Anything that you do, whether it’s single, as a group, individually, whatever, please let us know.”

He added, “Your activities, whether small or big, drive a visitor to this community, and maybe a possible extra day or overnight stay.”

Niagara Greenway Executive Director Gregory Stevens said he’s interested in the idea of an art trail. He said the commission is considering a study to find, “How do we go from Artpark all the way to Fort Niagara and tie these communities together in an interesting way. … If art was part of the way that it came together, that would be a wonderful, thematic thing that we could promote – like you have a wine trail.”

Stevens said such an entity could be “A really interesting way for this community to brand itself. … It’s something that John’s organization could promote, and we could help you build.”

Both Welch and Nicklas said it’s important to promote Niagara County artistic offerings, events and retail locations – not just those in Lewiston.

“Hopefully this is going to be big,” Welch said. “We want to draw people here for the arts and what we have.”