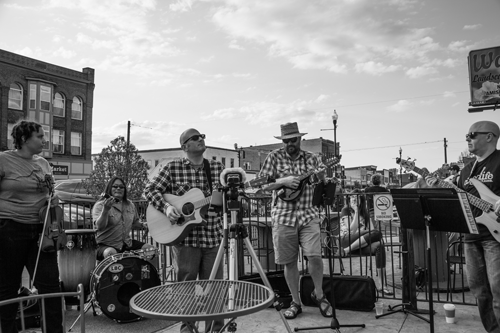 For art and music lovers, Yellow Jack, a folk and Americana band, will be sharing the stage, playing the 3-3:45 p.m. slot for the Oliver Street Arts Festival running noon to 5 p.m., Saturday, Aug. 17, on Oliver Street between Robinson and Schenck streets in North Tonawanda.

Frontman Dennis Reed, guitar and vocals, was born in and grew up in North Tonawanda but didn’t really care about the area’s history. Decades later, he said his band is steeped in it.

“The band Yellow Jack, it sort of grew out of my interest in local history,” Reed said. “I’ve been a musician ever since I got the bug watching the Beatles … but I never really played Americana or Folk music. I started getting into local history about 10 years ago … there was all these great folk songs. Songs about the Erie Canal, songs about the President McKinley assassination.”

Reed said that no one was playing these songs, at least not at the bar scene of Western New York.

“They were all playing Grateful Dead or metal or y’know a sort of noise pop,” he said. “On the scene I couldn’t really see this fitting, y’know, this folk music.”

In the end though, the only way to find out was to put a band together and start playing and see if people enjoyed it, Reed said.

“We’ve got a couple different things going on, one is to celebrate this place, Buffalo, North Tonawanda,” the Yellow Jack frontman said of his band. “To explore it, remind people of it, share it, communicate it to people.”

“I’ve also written some songs too,” he said. “We’re going to be developing original material to further explore the history of the region. We’ve already started with a song called ‘Oh Mighty Niagara,’ which I wrote about some of the daredevils and the forlorn suicides who’ve perished over the falls for centuries.”

Reed mentioned other rich traditions that come from right here, locally, like the ghost stories about Black Hannah.

“We’re looking at another one, Black Hannah who was an early African-American resident and reputed fortune teller and reputed Underground Railroad conductor,” Reed said.

Some songs, of course, you’ve got to dig deep for, explained Reed. Discovering all this history, even in the age of the Internet, is still an in-depth process.

“I really like primary sources, as much as I can, so I’ll use genealogy website to look for documents like census records and that sort of thing to put people at places and times, find occupations or whatever you find about them,” Reed said. “There’s all that stuff in census records.”

“I also use a lot of newspapers, there’s a website,” Reed continued. “That’s a whole massive index of an archive of upstate New York newspapers stretching back to the 1800s, so, there’s a lot of good stuff on there! And then I also do have contacts at all the local history museums. I’ve done web work for them and just partnered with them on some of their research on occasion. So, I’ve got some sort of personal resources, too.”

Reed will be on Oliver Street all day, setting up at 8 a.m., selling T-shirts and watercolors depicting different scenes of the area, especially the Wurlitzer building that he says he’s particularly interested in.

“It’s interpretation and sharing of the rich history of the region,” Reed said. “The Wurlitzer factory building, I’ve painted that several times.”

The Wurlitzer building was originally the home of the North Tonawanda Barrel Organ Factory and it can be seen by anyone driving north on Niagara Falls Boulevard. It is easily the tallest building in the area, dwarfing its neighbor, Walmart.

“Probably the historical subject I’m most expert in is the history of the band organ and the carousels in North Tonawanda, especially the band organ, and Wurlitzer ended up being the major company, but there were other companies in the late 1800s early 1900s,” Reed said. “I’ve done a lot of research in that area, so, it’s a visual subject I return to a lot. Haven’t written any songs about it yet, but there will certainly be one.”

In the end though, Reed said that though he is a serious artist, nothing comes close to music.

“Music, to quote Frank Zappa, ‘Music is the best,’ ” Reed laughed. “It just kind of moves you the most and I think it’s just got wonderful opportunities to share it with people and it’s a collaborative endeavor, too. You get to go out and play it with other people and it’s all there. Some of the writing and the art can be a little lonely by comparison, a little isolating, but music, I love the community of it; I love that it’s something we enjoy together.”

More information on Yellow Jack can be found at https://www.facebook.com/yellowjackbuffalo/.