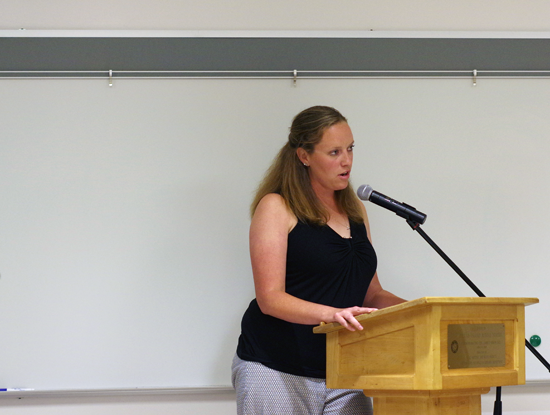 Kate Girard speaks at Wednesday's Board of Education meeting about the hiring process of a new Huth Road Elementary principal. Looking on at left is Max Pikula, who was appointed to the job moments later. (Photo by Larry Austin)

The Huth Road Elementary School PTA president blasted the hiring process undertaken by the Grand Island Central School District after the Board of Education filled the vacant principal job at the school.

The board voted 6-0 to appoint Pikula to a probationary appointment as Huth Road Elementary School principal. Pikula has been the assistant principal at Veronica Connor Middle School since 2016. There were 26 applicants for the job, which opened when just before the end of the school year Dr. Ami Alderman abruptly resigned her position as principal in a terse, one-sentence letter to the board.

Kate Girard said she was on seven different panels to fill vacancies in the district. She said, “And throughout all these processes, I did my best to try and find the best person/persons that would serve the best for our students and our community. We were presented with a pool of candidates for each position and asked to rank them and submit the final two for recommendations to the superintendent. In one of those cases, after completing the panel of interviews, we had selected our two final candidates and were instructed to send forward an individual that was not who we had selected based on the fact that they were who was asked from the district office to be sent forward instead of who we had selected to send forward for that position.”

Girard said on July 6, “before the resignation of Dr. Alderman was accepted, we were told that Huth would be okay because the assistant principal from the middle school, Mr. Pikula, was going to take the principal job.”

Girard added, “This process lacked integrity and the agenda of the district office was pushed forward. It was presented under the guise that the community would be involved in the interview process, that a parent stakeholder committee would be formed, and that the appointment of the candidate would be followed through, but this entire process was predetermined before it even started. If the intention of the district office was to move Mr. Pikula to a Huth Road principal job, why not do so as an interim with actual transparency?“

Just moments after Girard finishes speaking, all the appointments on the night’s agenda were passed without discussion by the board.

Kate Girard’s husband CJ Girard also questioned the integrity of the district at the end of the meeting during another comment period.

Asked about the comments by the Girards, School Board President Ashli Dreher referred the questions to Superintendent of Schools Dr. Brian Graham.

Asked about Kate Girard’s contention that the hiring of a Huth Road School principal was predetermined before it even started, Graham said that was “not even possible.”

He explained that the job was posted and 27 individuals applied and went through multiple layers of vetting.

Dreher added, “That being said, with 16 years of teaching experience in one of our elementary schools, 19 years altogether – three years as an administrator, and 16 years as a classroom teacher at Kaegebein – (Pikula) certainly knows the district well, and I think he will do an outstanding job bringing Huth together and listening to parents and listening to faculty and moving Huth forward.”

Kate Girard also said during her remarks that Alderman’s resignation “was at the request of the district office and orchestrated after most of the administration positions throughout Western New York had already been filled.” Asked if Alderman was forced to resign, Graham said, “I can’t comment on personnel matters.”

Which is also what was said after Kerri Nowak, who Alderman replaced as Huth principal, went on what Graham said was a “sabbatical leave.” Asked if there is something wrong at Huth Road School, given that the school is on its third principal now in a short time frame, Graham said, “No, there’s definitely nothing wrong at Huth. It’s our job to identify the best possible candidate as the principal leader of the building, and we did that tonight.”

In other board appointments, which were all passed 6-0:

•Allison Porter was appointed to a probationary position as a Sidway Elementary School teacher effective Sept. 4. Porter replaces Joyce Cowan, who retired. There were 133 applicants for the position.

•The board appointed Jennifer Reynolds to a long-term substitute position at Sidway Elementary School. Reynolds, who was a teaching assistant at Sidway, replaces Michelle Taylor, who is on child care leave. There were 50 applicants for the post.

•The board appointed Geneseo State College alumna Lauren Insinna to a long-term substitute position at Sidway Elementary. Insinna replaces Margaret Silverstein, who is on child care leave. There were 58 applicants.

•Stephanie Kennedy was appointed a teaching assistant to replace Shannon Piazza, who resigned. There were seven applicants.