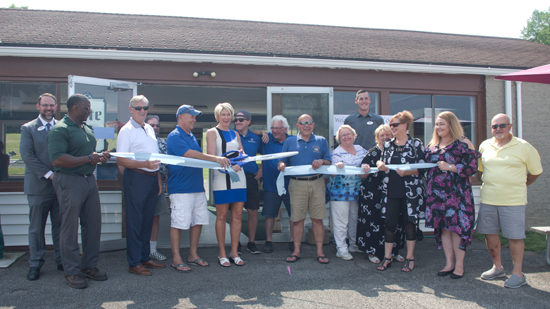 Cyndy Montana of Montana International cuts the blue ribbon on her company's latest effort, The Chandler, a store in Big Six Marina off Whitehaven Road. (Photo by Larry Austin)

A virtual economic trident is forming on the Island between stakeholders, as illustrated by the ribbon-cutting for a new business on the waterfront Friday.

The Grand Island Chamber of Commerce helped the Island meet The Chandler, the newest face of Montana International, the Island company headed by Cyndy Montana that has signed a concessions contract with the New York State Office of Parks, Recreation and Historic Preservation. Government and business leaders met for a ribbon-cutting event Friday at Big Six Marina.

The Chandler is a new store at the marina where none existed.

Longtime Islander Terry Funk said at the ribbon-cutting that the building was there, “That was about it.”

What services were available in the past? “Actually nothing,” Funk said. “Just pay your fee and launch your boat.”

Brian Chapin, the director of operations for Montana International, said there was never a provisional store on the location until this summer.

“Now we open this as a full provision store, which will have food stuffs, beverages, marina supplies like life jackets, oil and the things that a boater would need.”

Montana said, “Everything I’m doing, I’m trying to bring back a little bit of history or meaning, and Chandler’s an old fashioned word for ship supply stores.”

Montana said her customers are the boating public, as well as “all the people that come and launch their boat every day. On the weekends, it’s crazy busy.”

The Chandler will sell gas, the only spot on the West River that does that, while giving boaters the opportunity to quickly grab some beer or snacks and then get right back out on the water.

“I’ve had so many of the slip renters say that they’re so excited to be able to finally get snacks and beer,” Montana said.

Chapin, manager of The Chandler, said, “The other part of it too is our dock hands are here to assist the boaters in launching and docking should they want it. Some of the boaters would want it. ... The state wasn’t allowed to do it because of the liability issue.”

“The other piece is that we have transient slips, so boaters that are navigating the Great Lakes in the Niagara waterways and lock system can call in and rent either just partial day or overnights. And for extended stays, they get power and they get water also. All these docks have power and water to them,” he said.

CJ Girard, vice president of the Grand Island Chamber of Commerce, said the best thing about The Chandler “from the Island perspective is the more attractions that they’re able to really beautify and pick up, the more customers we’re hoping will stay with their money on the Island and support the local businesses.”

The boating segment of the Island economy is significant. Girard said June and July “have been fantastic. Boating traffic is up significantly. There’s plenty of places to dock now on the Island with services available. The store is a perfect example of a convenience store ready to sell products to the boaters that are transient with the hopes that they’ll get off and look for a restaurant or look to order pizza, you know, all the things that come naturally with stopping and wanting a meal or snack.”

The partnership between the state, Montana International and local business has been fruitful for all three stakeholders, ignited by Montana herself, who Girard noted is a member of the Chamber of Commerce. “And she’s very involved intimately with the state now, running the operations for three major parks, two marinas.”

Girard said the state’s nascent West River Trail, a contentious political issue, is an example of a burgeoning eco-conomy.

“We stay away from the politics. We just look at it now that it’s here. We want to capitalize on it. We want to make sure we’re bringing the eco tourists to the Island. Eco tourism is booming. It’s one of those things where we can really see people coming to the Island, for all different reasons now, and we’re just hoping while they’re here, they’ll support our businesses, support our business community, and maybe some new businesses will pop up. There’s real opportunity when you have this kind of access to the water, this kind of access to state parks.”