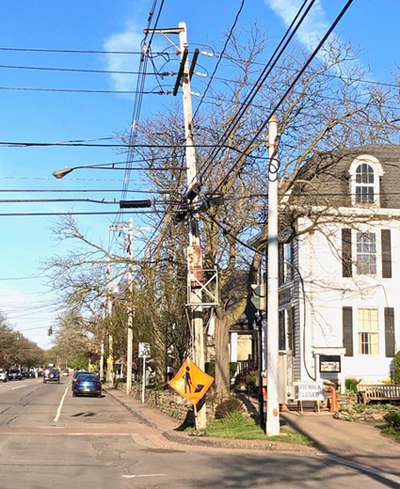 Sign of the times? Simonson receiving positive feedback on report

Signs, utility wires and the notion of visual clutter in a historic village have been the talk of the town in Lewiston over the past three weeks. Lee Simonson’s report was featured in The Sentinel on June 22 and, since then, “All the feedback I’m getting is positive on the sign/wire report.”

Simonson’s 36-page document emphatically states the barrage of overhead objects on Center and Water streets is detracting from Lewiston’s character, obscuring its landmarks and frustrating visitors. In his report, Simonson methodically identifies problem areas and suggests ways to find funding to implement his proposals.

The Historic Preservation Commission is the first village entity to publicly support the report’s findings. At the board’s June 24 meeting, Chairman Ken Slaugenhoupt said, “I think he’s got a good idea.”

Slaugenhoupt said he would write a letter to the Board of Trustees stating, “We feel that, as an HPC board, we are in favor of giving consideration to the points that Lee proposes, and creating a plan of action, focused first on signs and to be followed up with other issues.”

Simonson said the clusters of green signs and pole wires have created “one of the most serious issues that faces Lewiston right now, in terms of its future.” Though he offers several ways to scale back, there are two ideas that seem to have the most traction thus far: reducing the number signs by 15%, and removing or relocating utility wires on Water Street.

Architect and HPC member Jim Fittante said, “They’ve actually proven when they take the overhead wires and put them in the ground it saves on maintenance – especially with our winters and storms. …

“But a lot of the signage he’s talking about is state-regulated. So, that’s going to be a battle.”

Center Street is under the auspices of the New York State Department of Transportation.

“A lot of the signs come from the state, because we’re on 104. The state is putting up these monstrous signs that don’t necessarily fit within a historical village. I think that’s where we need to argue with them,” HPC Vice Chairwoman Loretta Frankovitch said.

Her board agreed with Simonson that many signs – particularly those meant to direct people to Lewiston and its attractions – are improperly placed or just plain misleading.

Simonson’s reports lists areas like Lewiston that function with less signage and noticeable utilities. In fact, the author says people need only look across the Niagara River. Niagara-on-the-Lake is a town with historic roots and a strong tourism base – and it’s a clutter-free community.

Simonson wrote, “Niagara on the Lake wasn’t named ‘The Prettiest Town in Canada’ by accident. The leaders and citizens there have worked for decades to make sure their historical town was preserved and protected from the ravages of signs and wires. The only poles you see on the main street in Niagara on the Lake are street lights.

“In addition, in the entire length of the historic district, there are no stop lights or stop signs. Pedestrians are expected to be careful and look both ways before they cross the street.”

In an email to The Sentinel, Niagara-on-the-Lake Chamber of Commerce and Tourism NOTL President Eduardo R. Lafforgue explained, “Niagara-on-the-Lake relies more in the civilized manners of its resident and the ambiance that this transmit to our visitors than in strict directions and excessive signages and utility poles that would overwhelmed the urban landscape (this keep the night light level low, create shadows and charm); we keep the heavy bus transit to town limits at Fort George tourism parking station to avoid too much signage, encourage walking and keep the human and urban scale; we enforced urban and behavioural rules discreetly and put the responsibility on the community to respect and enforce respect to the town and its environment.”

He said some of the policies are “consciously enforced” while others are “the result of tradition.”

“All this requires savvy management and discretion to keep the charm of Niagara-on-the-Lake intact. There is no perfect recipe, ours is a daily challenge to preserve and growth simultaneously,” Lafforgue wrote.

As more and more Lewiston residents read the sign and wire report, Simonson said he hopes elected leaders will begin to take action.

He said, “I think the top three priorities at the present time are take down or relocate the utility poles on Water Street; having the village and town adopt a sign policy of ‘one up, one down,’ (and) convincing the state to take down the gantry at the Lewiston entrance.”

HPC member Peter Coppins said, “No matter how long it takes, if there’s an opportunity for it, I hope that our Village Board absolutely embraces it.”

In the meantime, Simonson said he would continue his public awareness campaign.

“There are so many aspects of this whole topic that it’s going to take years to discuss and implement,” he said. “As mentioned before, the first thing is just to get people to open their eyes and recognize the challenge Lewiston faces and the impact on our local heritage and culture.”

Simonson plans to include a link to the sign and wire report in the next Historic Lewiston News email newsletter. The document also can be downloaded from the link below.