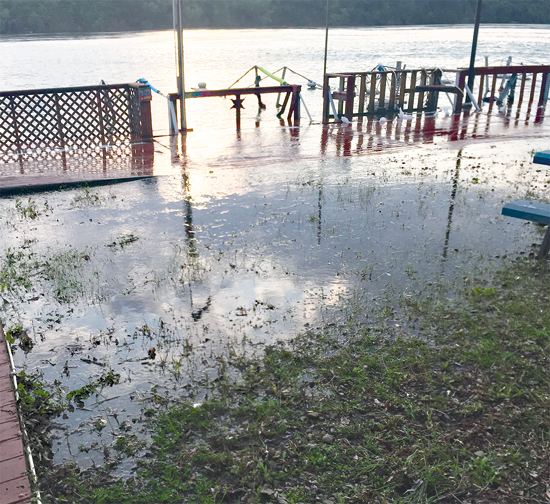 Construction and high water levels have hampered boaters looking to dock at Village of Lewiston slips this summer.

Boating slipholders in Lewiston are once again out of luck.

Damage to the village waterfront that cost them the 2017 season – damage that was in the process of being repaired before high water levels returned this spring – will likely leave them without a permanent port again this summer.

“Without the water receding, we cannot continue to work on sheet-piling – it can’t be welded until the water goes down,” Mayor Anne Welch said Monday. “So, that being said, it doesn’t look like this year we’re going to have any slipholders in the water. I don’t see the water receding until probably at least August.”

Engineer Mike Marino said, “The (International Joint Commission) has some graphs of what they expect it to do, and it’s already lagging behind that. They see no appreciable decrease in the water level, despite their attempts to open the gates or whatever they’re doing. Based on their curve, it should be August or September before we’ll actually be able to bring the deadman wall together with the bulkhead wall and do that kind of work.

“But we are going to try to continue moving forward with anything we can. Pretty soon, we will be trying to put the piles in for the finger docks, so that the upland work of running utilities and things, that work can commence in what we call the ‘middle dock’ area between The Silo and Water Street (Landing). Hopefully by the time that’s going, we’ll be receded enough that we can tie the bulkhead and that in together and build up that area. We want to keep making as much forward progress as we can.” 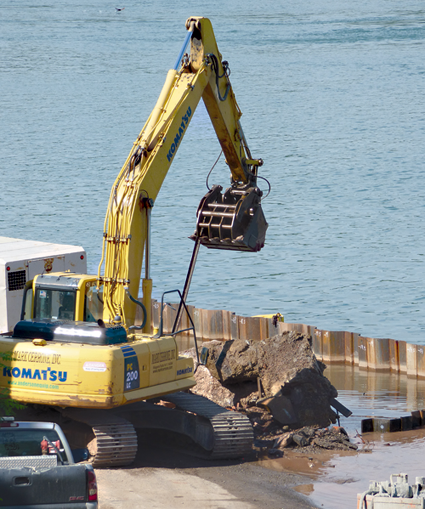 Construction and high water levels have hampered boaters looking to dock at Village of Lewiston slips this summer.

Welch cautioned the floating docks would not immediately be usable.

“You are going to see these finger piers going in; they have to set them in. This is part of the process of building these docks. (Boaters) cannot tie back to them, because they are not going to be tied to the seawall – to the bulkhead,” she said.

Marino said a floating dam would be used to further deter boaters from prematurely accessing the floating docks.

“It’s just not usable,” Welch said. “We don’t want them to think, ‘Oh, they’ve got them all in; why won’t they let us put our boat in there?’ Because it’s not tied in. Even though it may look like it’s OK, it’s not.”

Moreover, Welch said residents, in general, should stay away from the south and middle portions of Lewiston Landing.

“Please, be patient with us,” she said. “We don’t want the public down there in the construction area. It’s dangerous; they should not be on it. And we’ve had plenty of people going around fences and stuff. Please: Stay away from construction.”

Of course, boaters are still permitted to enter the river at the waterfront’s northern access point.

In fact, slipholders who paid for the 2019 season received free launch passes.

“Our launch is open – one of the few launches that is open,” Welch noted.

Those who paid for slips can roll their fees over to next summer, at which time waterfront repairs will be done Welch said.

“It’s going to be state-of-the-art and beautiful next year,” she noted.

Deputy Mayor Vic Eydt said he expects 2020 slip demand to be high, so, for those who paid this summer, he said, “You don’t really want to take your deposit back.”