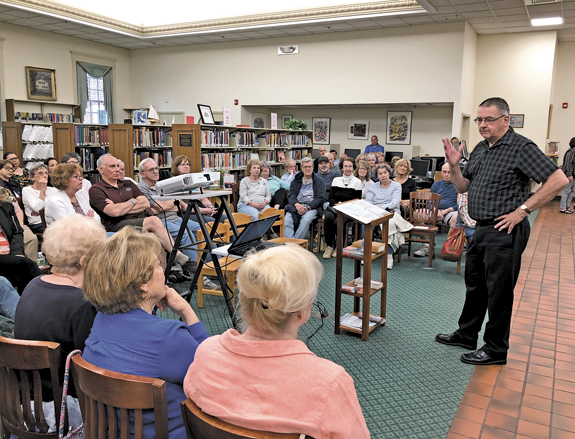 Ken Slaugenhoupt chronicles the history of the Frontier House to a captive Lewiston Public Library crowd.

Why was the Frontier House built almost 200 years ago, and what will it look like a year from now?

Lewiston Public Library’s main room was filled Thursday night, as about 100 people came out to learn about the Frontier House’s origins. More than a few were also curious about the historic Center Street building’s future.

The Friends of the Lewiston Library asked Historical Association of Lewiston President and Historic Preservation Commission Chairman Ken Slaugenhoupt to be the keynote speaker.

“When Rita (Geiben) first asked me to do this, I didn’t hesitate; I said, ‘Yeah, sure; the Frontier House – that’s piece of cake.’ And then I sat down with a pencil and paper and started to think of exactly what I was going to say, and I realized the Frontier House is a big deal. It’s a very big deal,” Slaugenhoupt said. “This beautiful, 195-year-old, four-story stone building right in the heart of Center Street.”

He added, “Let me tell you this: I’m sure that each one of you have questions in your mind about the Frontier House, probably most about the future. Some about the past. Well, I’m here to tell you right now, by the end of this evening, all of your questions will be multiplied.”

As the crowd laughed, Slaugenhoupt delved into details on what the parcel of land was before the Frontier House was built (think: wilderness); when construction began (1823); the people who oversaw construction (Benjamin Barton, James Barton, Samuel Barton and Joshua Fairbanks); a mysterious silent partner (Sir John Lowther Johnstone); what materials were used – and from where; and the list of owners, which included the Raymond family for more than 100 years.

His talk concluded with a video shot inside the Frontier House. The behind-the-scenes footage was created by his son, Niagara Boundary and Mapping Services President Kenneth Lee Slaugenhoupt, who used a FARO Laser Scanner to generate 3-D X-rays.

Slaugenhoupt received a warm reception from the crowd following his 45-minute presentation. After the event, he said his passion for the Frontier House is “because it’s almost 200 years old. In terms of the size of the structure, the magnificence of the structure, it is unique.”

“In terms of the village, the Frontier House is just a remarkable building. When I was a kid, I used to go in there and eat with my parents. It’s just something that needs to be maintained and improved. I’ll do whatever I can to help it go along.”

The same can be said of Jeff Williams, who was the second guest speaker. 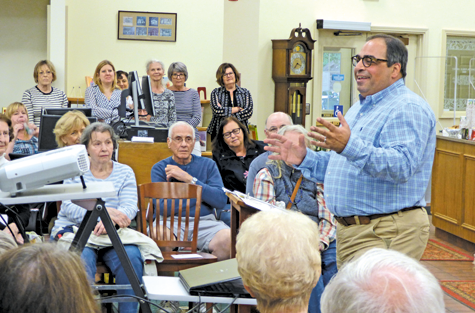 In February, Williams and his brother, Jerry, partnered with Ellicott Development CEO William Paladino, and investor Bill Game to purchase the Frontier House from Hastings Lewiston. They will begin the process of resurrecting the nearly 15-years-dormant building this summer.

At the end of April, the new ownership group tasked Blooms Relax Landscaping with sprucing up the areas in and around the parking lot and playground.

Williams joked the first floor “still looks like McDonald’s,” which was the tenant when the building closed in December 2004. More recently, Williams said the inside is “a little cleaner right now. We’ve got a guy in there for the last three weeks, kind of just cleaning out anything that’s in there, any of the old metal and just stuff that was left from McDonald’s – the boards and things like that, we kind of took down. If you notice, there’s a Dumpster out on the side right now – that’s just junk that’s inside; nothing that was substantial at all.

“But just to kind of clean the slate a little bit. We cleaned up the outside. There was, I think, six or seven truckloads of just debris from the outside of the building that we scraped out of the parking lot, bushes. It was awful. It looks a lot better.”

He added, “I think next steps, as we move forward, are to shore up the porch and clean it up a little bit. Get it painted up, just so it’s more presentable to Center Street. And then start working on a planning process of where we’re going to go, and what we’re going to do, and how we’re going to get there.”

Williams said he and his partners are evaluating ideas for the new Frontier House.

“At this point, there’s as many ideas as there are people in this room,” Williams said. “And if I said anything different, I would be absolutely lying. … There’s just a million ideas.”

Williams said he and his partners are impressed by a bed and breakfast located within Buffalo’s Elmwood village, and he recently received an interesting email suggesting the Frontier House basement – its rathskeller – could be the site of a New York wine exchange.

Williams thanked Game, who was in attendance, and said he probably wouldn’t have invested in the project if Game wasn’t involved.

He offered to answer questions and said, “I don’t have prepared remarks, because I wanted to see where you wanted to go.”

Williams explained, “There’s many rumors about the building at this point.”

Speaking on the viability of the Frontier House, Williams said, “We’ve spent some time in the building lately, just to kind of clean it up, to get a better blank slate. It’s pretty rough, but, structurally, it’s in really good condition.”

Williams was asked about a timeline. He said attention will shift to the Frontier House once foundations are poured this weekend for the future plaza at Center, North Eighth and Onondaga streets – another project partnership he has with Ellicott Development.

“Hopefully, in the next couple of weeks, we have some work done to the parking lot; we can get it cleaned up and paved up, and striped, just to give it kind of a little nicer look,” Williams said.

Town of Lewiston Councilman Bill Geiben asked if the Frontier House would be preserved “in the most historic way possible.”

“Yes, absolutely. Absolutely,” Williams said. “It’s on the historic registry, so anything we do has to make sure it fits with that. Anything we do to the exterior of the building, facing Center Street, we need approval. We need approval from the Historic Preservation Board.”

He noted, “We’re going to have to find a good mason that can match some of that mortar, and I think it’s going to happen. We found a couple people who are very interested in doing the work.

“Shoring up the building is the most important part at this point.”

Williams added, “The pictures that (Ken) showed you tonight, and some of the pictures of the interior of the Frontier House, the Historical Association of Lewiston’s downloading on a flash drive for us to take a look at, to make sure … as we move forward, we have something to look at, and kind of get our creativity going – which is kind of neat, as well.”

Finally – and contrary to urban legend – Williams said, “I’ve been in about 22 times, recently, and I have not witnessed a ghost.” 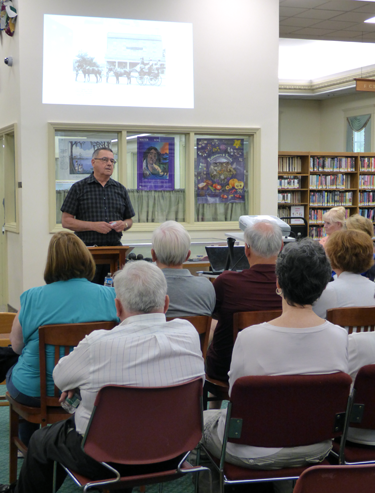 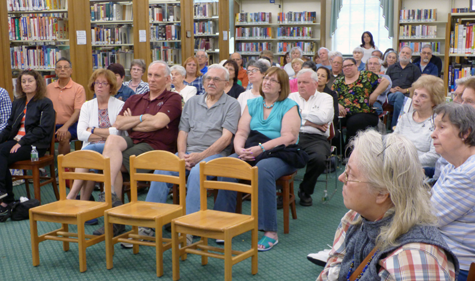 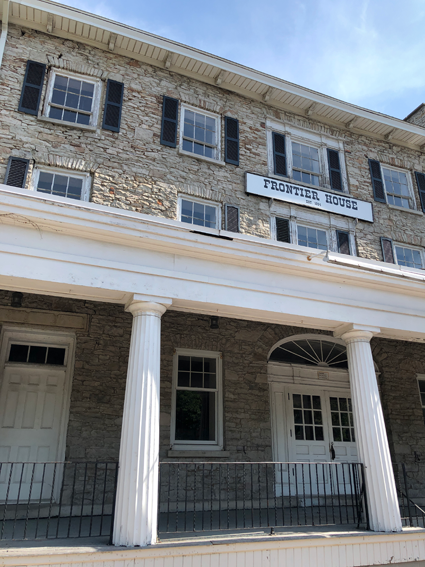