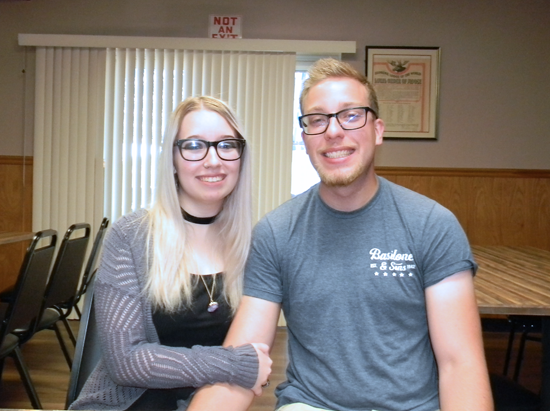 Members of Lewiston-Porter’s Class of 2019 will take to the stage at Artpark on Friday evening for their high school commencement ceremony.

But as they receive their diplomas and special honors, one class member will not be there. He’ll already be embarking on the next chapter in his life – that of service to country.

Come Monday, June 24, 18-year-old Howie Waterstram of Lewiston will be leaving McKenna, his 18-year-old wife of just five months, and proud parents Rob and Tracie, to begin a four-year tour of duty with the U.S. Marine Corps. Howie is headed for Parris Island, South Carolina, to begin USMC basic training this summer.

“I wanted a challenge in my life; and the Marine Corps is what sets all the other branches apart,” Howie said. “It’s something that gives me pride, belonging and honor.

“First off I go to Parris Island … which is next Monday. After that, I get a 10-day leave. I’ll come back home. On Oct. 1 I report to Camp Lejeune.”

For the Lew-Port senior, military service, particularly the USMC, has been a long sought-after ambition. Howie got his first taste of it back when he was all of 12 years old at a time when most kids his age are involved in sports, family life, fun – something completely different.

“I was 12 years old; I joined the Niagara Youth Marine Cadets,” he said. “Sometimes you’re knowing things are going on a Saturday, missing sleepovers, parties, etc. I wanted to do this.”

“Our aim is youth helping youth; to achieve the goals to lead a productive life; and to help the quality of life in their community,” its mission statement reads.

Likened to the successful Junior Marines program, only more on a local scale, Howie said NYMC was created “to get kids off the streets, teach them respect, honor courage and commitment.

“They taught me everything I know about the Marine Corps now, and I wouldn’t be where I am without them,” Howie said.

The young man, who just graduated from a Niagara-Orleans BOCES program centered on building construction systems, said he was active in musicals and plays in his earlier years at Lewiston-Porter.

Today, “I have a very high interest in firearms, politics; I also like working on old cars.”

“I know it’s a crazy journey,” he said of the past months. “I got married at 18 years old; in high school I wanted to be a Marine my whole life. I’ve had nothing but support from my family and friends, and I couldn’t be more grateful for them.”

Howie said he was particularly taken aback by the acceptance he has received from his friends at Lewiston-Porter.

“The administrative people, they have been nothing but polite to me,” he said. “I show respect to them. They keep thanking me for my service, even though I haven’t done anything (yet).”

“My friends, well, that’s a path they don’t want to pursue. They support me; they think it’s pretty cool what I’m doing, so it’s cool to see that they come out to support me,” he said.

Howie is one of two Lewiston-Porter seniors entering military service this year. The other is Steven Smith, who will be entering the U.S. Army.

“I’ve known him for 10 years, and I’m really excited that he’s doing his own thing. It’s not the Marine Corps, but I’m still proud of him,” Howie said.

His wife, McKenna, who will be on the Artpark stage along with her Lew-Port class on Friday, said she is fully supportive and plans on joining Howie once he begins USMC infantry school in October.

“I’m very proud of him; I’m going to support him, no matter what,” she said.

Howie said he had to work with the Marine recruiters on the time element when it came to leaving before graduation.

“When you enlist, you get one year (time prior to departure), but since I was able to enlist early – because I impressed my recruiters –they gave me an extended time. The longest possible time I could get was a week before graduation, so it just turns out I had to miss it,” he said.

Following boot camp, “My job is going to be infantry, so I’m going to be a basic rifleman,” Howie said. “I start school Oct. 1. After that, it’s all personalized, so I’m not really sure (at this point). I’ll just have to see. They just teach you the fundamentals of combat and firearms instruction, so I’ll just have to find that out myself.”

Of his future plans, Howie said he’d like to consider the building trades area as a future USMC endeavor. For now, he said he wanted to just “feel it out” to see where he stands once he clears basic.

Speaking of his son’s next chapter as a member of “the few, the proud,” Howie’s dad, Rob, said he was nervous of the whole thing, but definitively proud.

Rob explained, “Dad’s nervous for sure; dad probably won’t be too good (come Monday). But extremely proud, the proudest I could be of anyone in my life.”

Howie, who just ended his job with Pat Stack out at Somewhere, said he is thankful to many for this opportunity and is looking forward to his new experiences.

“I just want to say ‘Thank you’ to everyone that’s helped me down the road, my family, my recruiter, Staff Sgt. Camisso, my best friends, and overall my wife, she’s my best friend,” he said.