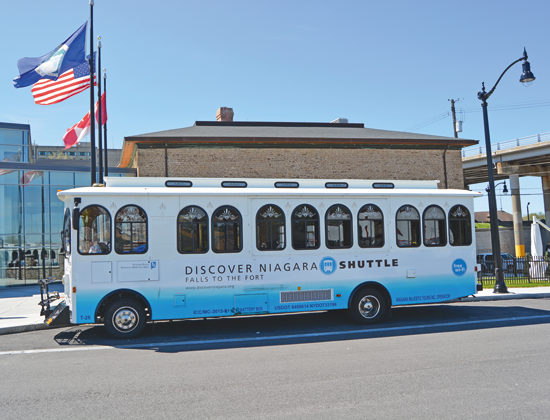 ALL ABOARD: Discovering Niagara's shuttle

The Discover Niagara Shuttle kicked off its fourth season last month, connecting riders to 17 destination sites along a 14-mile route from Niagara Falls to Fort Niagara. Overseen by the Niagara Falls National Heritage Area (NFNHA), the free hop-on, hop-off service has serviced over 105,000 riders from across the globe since its inception in 2016.

Last week Friday, I was fortunate enough to ride the shuttle alongside NFNHA Executive Director Sara Capen. Five years ago she spearheaded the campaign to implement the shuttle. Capen said she tries to ride the shuttle whenever she can on Fridays, not only to monitor operations, but to connect with the riders.

“Sometimes I get so caught up in the operations in my office, I’m not out talking to people. And I want to hear and tell their stories,” she said.

Capen is a natural storyteller, whose encyclopedic knowledge of the local area is sure to captivate any rider within earshot. This shouldn’t come as a surprise, given her experiences with the Niagara Falls National Heritage Area, and the nearly 10 years she had previously spent as a history teacher. Throughout her career, Capen has worked to impress upon people the important, and often untold histories and stories found in Niagara County.

Yet, one doesn’t need to speak with Capen directly to learn these stories. Many of them come alive naturally through the Discover Niagara Shuttle’s carefully curated route through Niagara County. Every landmark reveals a new detail.

Of course, having a team of friendly and knowledgeable shuttle drivers who can help relay these stories never hurts, either. In fact, the shuttle offers a number of attractive amenities, including a climate-controlled interior and complimentary Wi-Fi. They’re also wheelchair-, stroller- and bicycle-friendly, so riders can hop on anytime.

The shuttle services more than 37,000 riders over the course of the season and each one is encouraged to utilize it whichever way best suit their needs. While the most obvious purpose is to provide a convenient way for tourists to explore the local area, find things to do and places to eat, something that surprised me was the many creative ways it’s being used – particularly by locals.

“When we built the system I didn’t anticipate the number of locals that would be using it,” Capen said.

She estimated it’s probably about 50% tourists, 50% locals at any given time.

“We have people who use it to get to jobs, to get to appointments, grocery shop; and I think that’s really important, because we don’t have a great transportation infrastructure here in Niagara County,” she said.

Some locals use it simply to avoid parking in busy areas, while others just like to ride the loop and go out to eat later. Being that the shuttle connects to so many great restaurants across Lewiston, Youngstown and Niagara Falls, these riders have plenty of options.

At one point, Capen posited the idea of doing a food tour along the route. 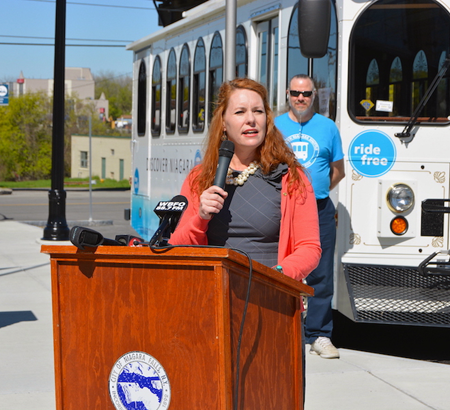 As we passed the Lewiston waterfront, Capen talked about another interesting way the shuttle has been used. Evidently, kayakers have even been known to put their kayaks in the water in Lewiston, paddle out to Youngstown, and ride the shuttle back. In response, Capen said they’re looking into funding to install a paddle rack.

As the shuttle chugged along, more riders climbed aboard, and the rich history of the area began to unfurl itself.

While other riders’ attentions were drawn toward the more well-known landmarks and locations, being a lifelong resident of the area, it’s sometimes difficult for my eyes not to gloss over at these popular fixtures. Instead, my attention was attracted to the lesser-known stories.

In Lewiston, for instance, the Tuscarora Heroes Monument by local sculptor Susan Geissler tells the story of how the Tuscarora Nation saved the lives of Lewiston residents during the War of 1812 during a British raid.

“People just aren’t aware of our history, of the people who live here, or who’ve come here. … It’s not just one story,” Capen said. “It’s not just hydroelectric; it’s not just Tesla. We should be looking to optimize our storytelling.”

I’d never considered it before, but the journey from Old Fort Niagara toward Niagara Falls is like travelling through time – from the time during the American Revolution toward the present. Along the way, one of Niagara County’s more oft-forgotten stories is finally getting the attention it deserves.

Many tourists and locals alike are often unaware of the area’s connection to the Underground Railroad.

“That’s what our organization tries to focus on: How do we get people to experience more and better understand our history?” Capen said. “How do we tell our stories? ... And the Underground Railroad was one that we really hadn’t told until recently.”

One of the primary ways this story is now getting told is through the Niagara Falls Underground Railroad Heritage Center, which was named one of the 10 Best New Attractions by USA Today last year. Connected to the new Niagara Falls Amtrak Station, the heritage center is actually built inside the original customs house that overlooked the historic suspension bridge where Harriet Tubman personally ushered slaves to freedom.

Likewise, the Niagara Arts and Cultural Center, another stop along the shuttle route, features “Freedom Crossing: The Underground Railroad in Greater Niagara” exhibit, which offers its own unique set works and artifacts. Additionally, the NACC is currently running an exhibit dedicated to the works of Stephen Marc, titled “Passage on the Underground Railroad,” which runs until the end of June.

Capen also said 10 local artists are set to begin painting murals next month along the underpass at the nearby Historic Suspension Bridge Village. Each mural will tell the story of freedom, through many different perspectives.

“We’re creating a new gateway to the City of Niagara Falls,” Capen said.

As the shuttle emerged from the underpass, I looked ahead and my stomach churned slightly. Dust from the construction crews removing segments of the Niagara Scenic Trail began to settle onto the road and Main Street came into view. It’s not hard to imagine what the riders were thinking.

Sensing the elephant in the room, Capen spoke up.

“Originally, when we were fighting for funding … there were lots of voices that didn’t want us to come down Main Street … didn’t want people to experience what Main Street actually looks like,” she said. “I advocated really hard, because we do have anchors that are here and, if we continue to shy away, how are we ever going to change – how are you going to be able to stimulate?”

She explained, “I feel like we have to tell our story about Main Street. … If we don’t tell our story, we lose the opportunity to say, ‘But there’s people working to make it better.’ ”

Then she leaned over, smiled to a couple of riders from New Zealand, and said, “Next time you come back, this is all going to be beautiful.”

While it’s easy to get cynical about things in Niagara Falls, as the shuttle started its way down Third Street – an area that has seen a stunning transformation over the past two decades into the cultural hotspot it is now – I found myself looking back at all of the development and imagining the proposed expanse of parks and trails that will stand where the parkway is now, and thinking about the area’s future.

“I hope they do come back,” I thought to myself. “Because this is all going to be beautiful.”

The future for the Discover Niagara Shuttle seems bright, as well. This past week, the New York State Legislature passed bills that authorize Niagara County to collect hotel room taxes in order to create a permanent funding solution for the shuttle. Capen said she hopes the funding can be used to expand the shuttle service area into other parts of Niagara County.

Over the course of the trip, some riders did experience issues with the tracking feature on Discovery Shuttle’s app, something Capen said they want to improve in the future. Should that happen, I found that the tracking feature found on the Discover Niagara website seems to work quite well.

Overall, however, the majority of riders seemed to thoroughly enjoy the shuttle’s offerings. One man on his way to the train station was very enthusiastic.

“I think it’s great,” he said loudly. “And the price is just right!”

Businesses and organizations along the route also offered nothing but praise for the program and for Capen.

“We just applaud Sara for all the hard work that she put into the shuttle,” said Kathie Kudela, executive director of the NACC. “You know, people have been talking about it for years, but she was the one that really implemented it and made it happen.”

By the trip’s end, it was clear how thrilled Capen is of the shuttle’s success. Her joy and enthusiasm for the project is infectious. As we headed back to her office at Niagara University, a couple of people got off the shuttle before us and headed into the Castellani Art Museum.

Capen is humble about her involvement and was quick to heap praise on to the local organizations, businesses and community leaders who all collaborated to bring the project to fruition.

“This what we’re capable of when we work together,” she said. “And this is how we can make Niagara County better. … We have all the assets; we just need to work together. It’s all of us.”

The Discovery Niagara Shuttle is scheduled to run through Sept. 2. A total of four shuttles operate seven days a week, from 9 a.m. to 6 p.m., Sunday through Thursday, and from 9 a.m. through midnight on Fridays and Saturdays. The shuttle is first-come, first-served. For more information, visit www.discoverniagarashuttle.com, or call 716-222-0729.