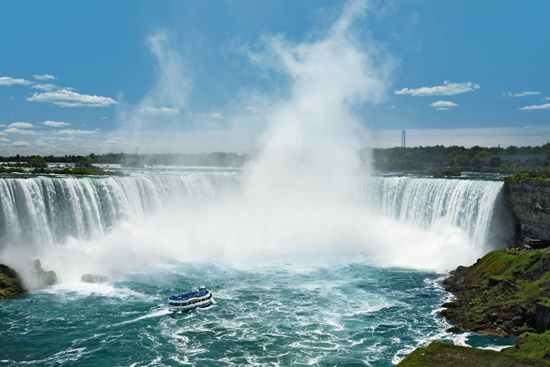 The Maid of the Mist

Put on your ponchos and sandals – the Maid of the Mist season is officially underway. Adventure-lovers and thrill-seekers from all over the world are lining up to get an up-close look at one of the greatest (and wettest) marvels in the natural world.

“1.5 million people visit the Maid of the Mist annually,” company spokesman Kevin Keenan said. “It’s really amazing when you're on the boats; all the different languages you hear being spoken.”

This year marks the 134th consecutive season of the Maid of the Mist, making it one of North America’s longest-running tourist attractions. It’s also shaping up to be one of the more historic years in the sight-seeing service’s history.

“This is an exciting time for the Maid of the Mist,” Keenan said regarding the string of positive announcements the company made last month.

In addition to being named one of USA Today’s Top 10 Boating Tours in America, the company revealed the construction of two brand-new electric, emission-free vessels.

Designed by Propulsion Data Systems and powered by ABB’s zero-emission technology, the two fully electric vessels will provide an up-close look at the Niagara Falls, completely free of engine noise or exhaust fumes.

The announcement isn’t just big for the Maid of the Mist, it also marks a major engineering achievement in the U.S.

“These will be the first of their kind vessels in the U.S.,” Keenan said. “They really tie in with the ongoing movement to focus on green energy – and where better to do that than Niagara Falls, which is really the original source of green energy.”

But the new green-vessels aren’t the only first for the company this year.

In April, Kaitlynn McHenry became the first female captain in the Maid of the Mist’s storied history.

In a statement posted to Facebook on May 24, McHenry said, “I am so humbled right now that it’s hard for me to fully grasp the gravity of this circumstance. I took a job driving a tour boat and turned it into something much greater.”

The Maid of the Mist runs until Nov. 3. Group discounts are available in person. For more information or to purchase tickets, patrons may call 716-284-8897 or visit www.maidofthemist.com.

Additionally, patrons can purchase the Niagara Discovery Pass and enjoy five of Niagara Falls’ top attractions and save up to 35%. For more information, visit www.niagarausadiscoverypass.com.