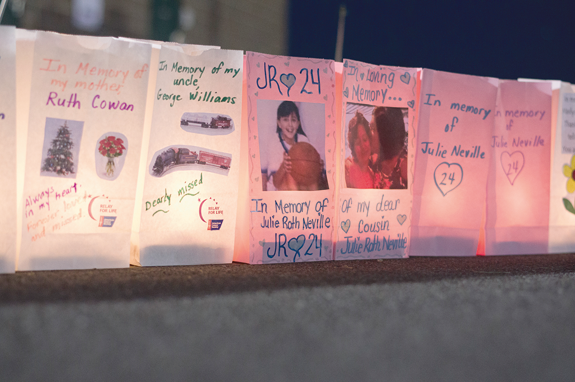 As night fell on Relay For Life, luminaria dedicated in memory of those who succumbed to cancer ringed the Veterans Park road. (Photo by Larry Austin)

Cancer is something close to Lindsey Sterner’s heart.

The 39-year-old Buffalo woman told participants in the Grand Island Relay For Life last Friday night of how she was diagnosed with an 11-centimeter mass in the middle of her chest that rapidly grew to 16 centimeters before treatment for a form of non-Hodgkin’s lymphoma saved her life.

Sterner was named the 2019 honorary survivor of GI Relay, the annual fundraiser for the American Cancer Society held in Veterans Park. She spoke from the heart about her diagnosis, her treatment, its side effects, and her post-treatment miracle: giving birth to her second child even after being told chemotherapy to eliminate her cancer would reduce her chances of having children again.

Sterner expressed her frustration, anxiety and outright anger at the disease.

“Occasionally I think to myself, ‘Why me?’ But I know it’s, ‘Why anyone?’ But I can’t help be really frustrated with the fact that I’ve done all the right things and it still happened to me,” she said.

“Cancer. Like, the legitimate kind. Not the benign or pre-cancerous removal kind. The kind that you have to treat with chemo kind. It sucks. It really sucks. I just wanted to be me again.”

As she underwent therapy, she said she envisioned her last treatment for months and was excited to reach a benchmark in treatment. “But I couldn’t have possibly felt further away from my pre-cancer self. It was hard for me to look at the face that stared back in the mirror. I definitely still looked like a chemo patient. I had no eyebrows, and they still had to do radiation.”

Buoyed by tests that showed her mass had shrank to 26 millimeters, she faced another hurdle. After radiation, pain returned to her back, and tests showed she had herniated disks in her neck. Surgery for her neck followed immediately after cancer treatment.

One year, one month and one day after her diagnosis, she was finally cancer free. Now three years later, she deals with the emotional aftereffects and thinks about those cancer patients who are not as lucky.

“Obviously, I’m so grateful to be here, but I’m so angry for those that lose their fight to this terrible illness. It’s just so unfair, and it’s another reason why I’m so angry at cancer.”

Sterner works on Staley Road at Fresenius Kabi, coincidentally the largest fundraising group for the GI Relay For Life in its efforts on behalf of the American Cancer Society with over $22,000 raised so far this year. The GI Relay, as of Thursday according to the American Cancer Society’s Relay website, has raised $105,434.88 so far this year, surpassing the $100,000 target. GI Relay is closing in on the $2 million mark for funds raised since holding its first Relay For Life. 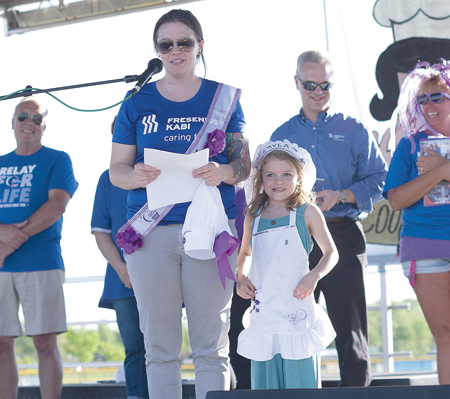 Lindsey Sterner, the 2019 Honorary Survivor for the Grand Island Relay For Life, speaks during the opening ceremony of the June 7 Relay with her 6-year-old daughter, Layla, by her side. Layla wears an apron and chef’s hat in the spirit of this year’s GI Relay theme, Cooking Up a Cure.

Relay For Life of Grand Island