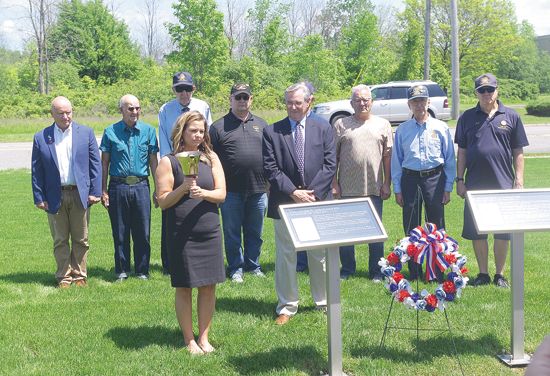 On the 75th anniversary of D-Day, Kelly Gast tolls a bell 13 times, once for each of 13 men who received the Medal of Honor during D-Day.

Grand Island’s Charles DeGlopper and the 12 other men who received the Medal of Honor for their heroism during the D-Day invasion 75 years ago this week were remembered with a bell tolling ceremony.

Bells were set to toll at 2 p.m. June at Trinity United Methodist Church, at St. Stephen R.C. Church, and at DeGlopper Memorial Park that bears the name of the Island hero. A small group of veterans paid their respects at the newly redesigned park, gathering for a bell tolling at the markers and flagpoles dedicated to those Islanders who gave their lives in service to the country. The bell tolled 13 times, once for each Medal of Honor recipient of the D-Day invasion that liberated Europe in World War IL

“When these 13 heroes landed on the beaches of Normandy, they did so for pride of country, not knowing that their actions on that day and the days after, would be so significant that it would earn them individual recognition, much less the Medal of Honor,” said Joe Daniels, CEO of the National Medal of Honor Museum, which organized the national bell tolling event. “It is only fitting that we honor these brave Medal of Honor recipients in whatever way we can. I hope that everyone hearing the 13 bell tolls in the recipients hometowns across America on this, the 75th anniversary of D-Day, will take pride in this recognition.”

DeGlopper, born in Grand Island, saw action at La Fiere, France. Deputy Supervisor Jim Sharpe started the ceremony by describing the actions DeGlopper took that saved the lives of his company and earned him the Medal of Honor posthumously. Pinned down in a roadside ditch, DeGlopper took it upon himself to support his comrades with fire from his automatic rifle while they attempted a withdrawal through a break in a hedgerow 40 yards to the rear. He walked from the ditch and sprayed the enemy positions with assault fire. In drawing the enemy action away from his fellow soldiers, they were able to escape to continue the fight and establish the first bridgehead over the Merderet River. For his actions, DeGlopper received the Medal of Honor posthumously.