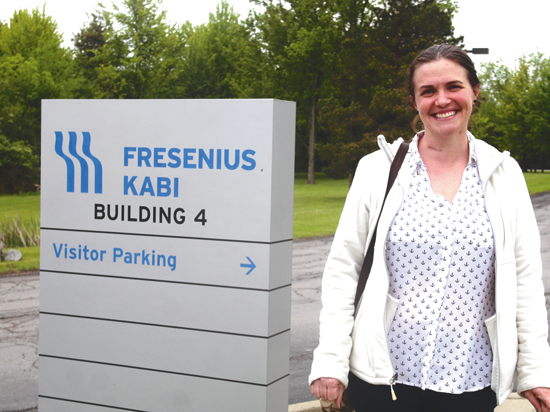 Lindsey Sterner, a 39-year-old mother of two who works at Fresenius Kabi on Grand Island, described her younger child as a miracle. Miles, age 17 months, was conceived after Sterner had completed treatments for non-Hodgkin’s lymphoma.

“He is my post-chemo surprise baby. They told me that the chance of having children after chemo was slim, but, clearly, it worked. He is great,” said Sterner, who was named the honorary survivor at this year’s Grand Island Relay for Life.

Sterner, who also has a 6-year-old daughter, explained the events that led her to being diagnosed with cancer. “On Layla’s third birthday, I had been sick for three days. I’d be fine all day and, then, at 8 o’clock at night, I’d get a fever of 103. On the third day, which was the day of Layla’s birthday party, everything was fine. After the party, we went home and put stuff away. I had this fever again.”

Joe, who Sterner described as her significant other, took her to an immediate care facility, where she was told to go to a hospital immediately, as they suspected meningitis.

“I told them that I did not have meningitis, and they told me that is something that I can be arrested for, for willingly spreading my communicable disease if I do not go to the hospital,” Sterner said. She did, however, go to Buffalo General Hospital, where she was admitted.

“They quarantined me in the hospital. They wanted to do meningitis testing, which included a spinal tap. I knew that I did not have meningitis, so I told them no. They said, ‘You’re going to be here all night long then.’ I said, ‘That’s OK. ...’ So, at 2 in the morning, they came in my room to tell me that I did not have meningitis, but I did have an 11-centimeter mass in my chest that they picked up on in the X-ray. At that point, we didn’t know what it was. I was convinced that it was nothing serious. I had been running in 5K and in 8K races right before this happened. I was fine, so there was no way that I could be really sick. So I went through three days of testing before they released me from the hospital.”

Sterner, who lives in Buffalo, said that blood tests revealed nothing. “Everything was fine. I just had this giant mass in my chest.” The mass was playing havoc with Sterner’s organs, pushing her heart out of the way and causing her thymus gland to become enlarged. “And on July 25th of 2015, they found that I had mediastinal thymic diffuse large B cell lymphoma. It is a type of non-Hodgkins lymphoma, and it was stage one.”

On Aug. 7, testing showed that the mass had grown five centimeters. She started a course of chemotherapy at CCS Oncology (now General Physician Cancer Care) that she finished in November, shortly before Thanksgiving. She then had daily radiation treatments until the end of February in 2016.

Sterner said that she was familiar with cancer treatment. “I went to school to treat people who had non-Hodgkins lymphoma and then I worked at Roswell, doing stem cell transplants on people who had the same kind of cancer that I did,” she said. In college, she had studied biology, biochemical pharmacology, and medical technology. At Fresenius Kabi, her job title is manager of quality assurance, critical systems, and validation.

Sterner said that support from her family and coworkers and from Island Kids, her daughter’s pre-school, was a big help during her illness. She said that she missed only one day of work. She said that Fresenius Kabi made sure that she had everything that she needed. Sterner was concerned about the effect of her cancer on her daughter, whom she described as her “mini-me.”

“The American Cancer Society gave me a bunch of kids books that she could read. What happens when mom gets cancer. She was like a little warrior. She helped me around the house. She helped me make dinners. She helped me do laundry. I don’t think that she realizes even now how serious it was.”

Sterner also asked for medications that would preserve for her the option of having another child post-treatment. “Knowing what I know about cancer and chemo, I wanted to try to preserve my ovaries from the drugs that were supposed to eat my cells, so I had them prescribe me with an injection called Zoladex. They normally give it to people who are going through in vitro fertilization because it forms a fatty shell around your ovary.” The goal was to save the ovary from being eaten by the chemo.

Sterner, who has been cancer free for three years, now enjoys her post-cancer life with her children. She said that her daughter loves reading and gardening and that the two of them created a garden at their Buffalo home that includes both vegetables and flowers.

“It makes Layla happy and it is really good stress relief for me to go out and do weeding,” Sterner said. She described her son as a “crazy” little kid who has learned how to climb on the table and stand on the couch. She said that the two of them share a sense of adventure. She said, before she had children, she was a snowboarder. She also enjoyed such activities as bungee jumping, water skiing, skateboarding, and riding a BMX bike.

When asked what she would tell someone else who had just received the same diagnosis as her, she recommended staying busy.

“Coming here (to work) and seeing people here and doing everyday things really helped me to stay positive. Even though it’s cancer and everyone thinks that cancer is scary. Even though it’s not a positive thing to have cancer, it doesn’t have to be a negative thing. It’s just another step.”

Relay For Life of Grand Island

•Friday, June 7 – Relay For Life, with the theme “Cooking Up a Cure,” will take place at Veterans Park from 4 p.m. to midnight. The opening ceremony will start at 6 p.m.