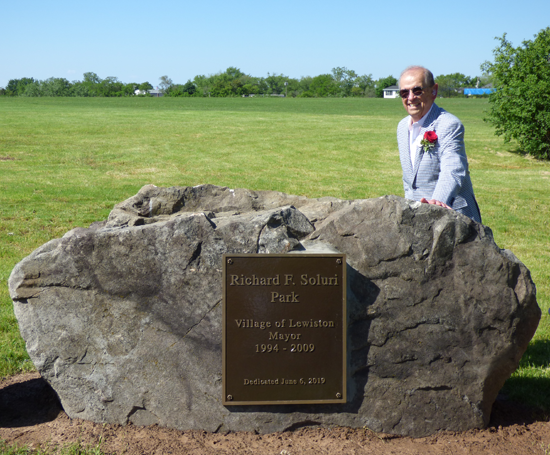 Former Village of Lewiston Mayor Richard Soluri stands next to the marker in his honor at the plateau.

Monument for 'The Mayor': Park named in honor of Richard Soluri; video & photos

In Lewiston, one name says it all.

Though he’s been out of office for almost a decade, people still call Richard Soluri the “Mayor.”

And, around here, he’s way more popular than any of those other one-name stars.

Dozens of friends, family members and elected leaders joined together Thursday to sing “The Mayor’s” praises, as the spoils area leading into Artpark – formerly known as the plateau – was renamed Richard F. Soluri Park.

Emcee Lee Simonson said, “We honor one of Lewiston’s icons for his years of dedicated service to the community.”

Niagara County Legislator Rebecca Wydysh said, “Every time I see him, that smile just lights up. Great big ‘Hello.’ Friendly as can be.”

Wydysh recounted how, when arriving in Lewiston, she was amused by people calling Soluri “Mayor.”

“When I first moved here, and I started to get into politics and meeting people out in the community, he was the person that you always heard about. Everybody knew Mr. Soluri – ‘The Mayor’ – right? It was confusing at first, because I had to figure out; like, there was this guy I met, and he was the mayor; but then he talked about ‘The Mayor’; and everybody talked about ‘The Mayor.’ And I was always trying to figure out, ‘Are they talking about the mayor or “The Mayor”?’ ” 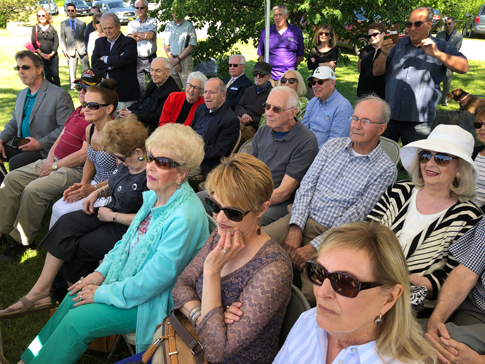 A portion of the crowd. 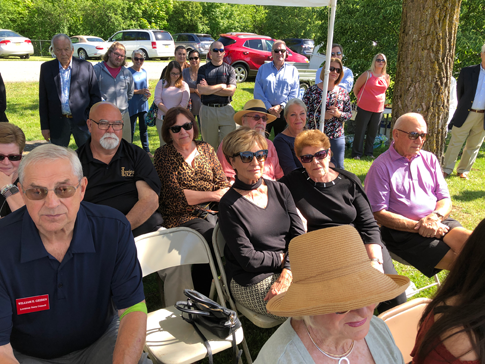 Former New York State Sen. George Maziarz said, “Richard, ‘Mayor,’ you put the village on the map as far as festivals were concerned.”

Soluri, 88, is credited with helping launch both the Historic Lewiston Jazz Festival and Smelt Festival. He also contributed to the Peach Festival as a Kiwanian, and helped bolster Lewiston Council on the Arts programming.

“The Mayor” was the linchpin in working with the state to repave Center Street, and oversaw initial contracts with The Silo Restaurant and Whirlpool Jet Boat Tours. He also negotiated with the New York Power Authority to reclaim the spoils area.

Speaking of the park, Maziarz said, “As all of you know, who are residents of Lewiston and residents of Niagara County know, that this area was not always this pretty. And Dick worked very hard to make this as beautiful as it is today.

“I know, because you twisted my arm for the state funding numerous times!” 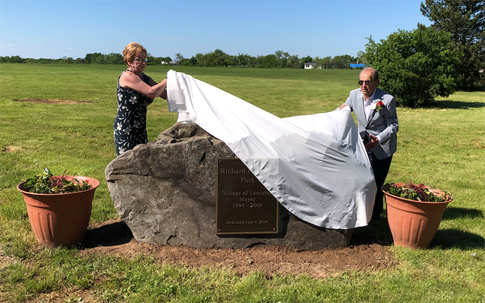 “The Mayor,” Richard Soluri, is joined by Mayor Anne Welch in revealing his plaque. 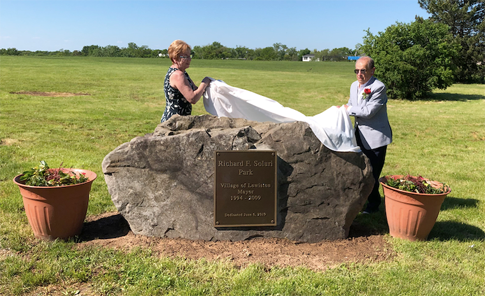 “What can you say about Dick Soluri, except we’re fortunate to have had him as mayor.”

Lewiston Council on the Arts Artistic Director Eva Nicklas said, “We were young, naive, and energetic, and never had to take ‘No’ for an answer, because Mayor Soluri said ‘Yes’ to every request. He made it possible for us to move our volunteer operation out of our kitchens and into the Red Brick School, where we were able to professionalize our organization; and then into the ‘Big Yellow House,’ where we remain to this day.

“Dick and his beautiful wife, Cici, were all about making Lewiston beautiful. He said ‘Yes’ when we wanted to build a courtyard in the vacant lot behind the ‘Little Yellow House,’ which later became known as the Lewiston Peace Garden. When we acquired a funky sculpture called ‘Bug,’ he said ‘Yes,’ when we asked to place that sculpture in the gravel lot near the Lewiston Library. With his encouragement and support, we built a park around that sculpture and connected it to the beautiful wildlife refuge right here on this plateau.”

Nicklas presented Soluri with a crown.

“In our world, he will forever be ‘King Richard,’ ” she said. “His enduring legacy inspires us all to make the most historic square-mile in America a friendly, beautiful and welcoming place.”

Simonson said, “Yes, he’s been a great friend to one and all. Yes, he’s been an outstanding leader. Yes, he’s been at the center of what makes our community so special. But he’s also been a lot more than a friend and a leader. His soul is what shines through.

“If you consider the Lewiston community as special, then it’s because he is special. Naming this park after him is perfect, because it is emblematic of what he has done all of his life – and that is taking nothing and turning it into something.

“Do you remember what this park looked like before Mayor Soluri got his hands on it? It was a wasteland. Not only did he work his magic in transforming this into a beautiful park and nature preserve – which I hope remains forever green – but he pulled the resources he needed to get the job done out of thin air.”

The plateau includes bird and butterfly habitats, as well as a dog park.

“A hundred years from now, when kids are playing soccer in this park, when the dogs are barking, when the birds are chirping in the nature habitat over here, people who don’t even know you – have never met you – they will see your name here, and they will whisper a gentle ‘Thank you’ for being the driving force in creating such a wonderful and beautiful community,” Simonson said. “Quite simply, Mayor Soluri, your name will be remembered forever, with undying gratitude and enduring respect. Thank you for everything.”

Anne Welch – who is actually Lewiston’s mayor – took it upon herself to get the park renamed and to have a plaque installed in Soluri’s honor.

“In 1999, Mayor Richard Soluri negotiated the return of this 47 acres of land from the New York Power Authority and applied for a grant through the New York State Parks to utilize the spoils pile for recreation and a wildlife habitat. This grant was a huge undertaking, and involved coordinating and working with the surrounding towns and villages, who help truck stone, clay and soil to this site to create this park.

“Dick loves sports, recreation and kids. He envisioned kids playing on this field, whether it be soccer or baseball, or just playing. He was also conscientious of the environment, and partnered with the Niagara County environmentalists to create the habitat area for birds and butterflies.

“The Village of Lewiston plans to apply for another grant for picnic pavilions, restrooms, tables, benches and more infrastructure to expand on his vision.”

She added, “Dick loves Lewiston and always wanted it to be the best it could be, and he made every effort to accomplish it.”

Soluri said, “I am overwhelmed.” He thanked the speakers and guests, and shared stories from his time in office.

He said, “We earned boundless grants from federal, state and county governments, and because of our dynamic and inviting streetscape project, we demonstrated to those agencies that we can compete and complete.

“I always respected the office of mayor, the village employees and, of course, our residents.”

Soluri added, “Just a little tip – and I think you know my motto – never rest on your laurels, and have the will to win.”

Town of Lewiston Councilman Bill Geiben, whom Soluri appointed mayor upon stepping down a few months shy of the 2010 election, said, “One of the things that I thought made him an excellent mayor was that he kept all the board members informed about everything that was going on. We never showed up at a board meeting to be surprised with any potential action. We were well informed. Everything was as open and transparent as could be, and he was extremely articulate when he was explaining things. He would explain the pros and the cons of what was being pursued, so that we knew what was going on.

“We were a team, and we worked well together.”

Soluri said the ceremony was a cherry on top of a wonderful career.

“It can’t be any better than that. Lee was outstanding. … It definitely is (the topper).

“I’ll never lie down and die. I’ll always be for Lewiston. I’ll always want everybody to be better. … That’s what I did.

“I wasn’t looking for the attention. I wanted them to have it. And the Arts Council is a good example. I didn’t have to coach them. I just knew they had the talent. And I always said, ‘Do it.’ So, they did.”

Soluri was mayor for four terms, serving from April 1994 through October 2009. 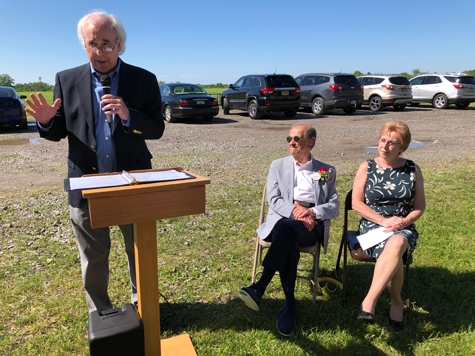 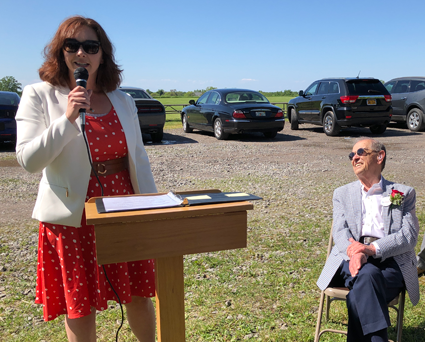 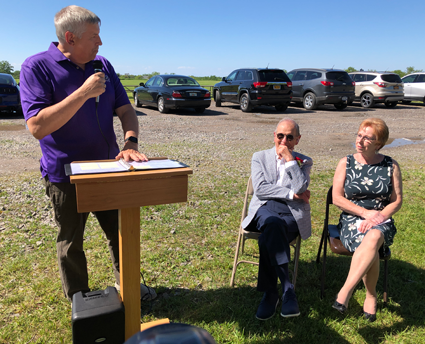 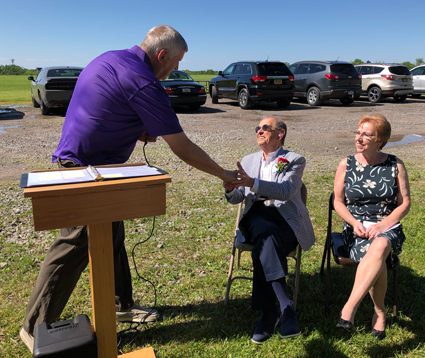 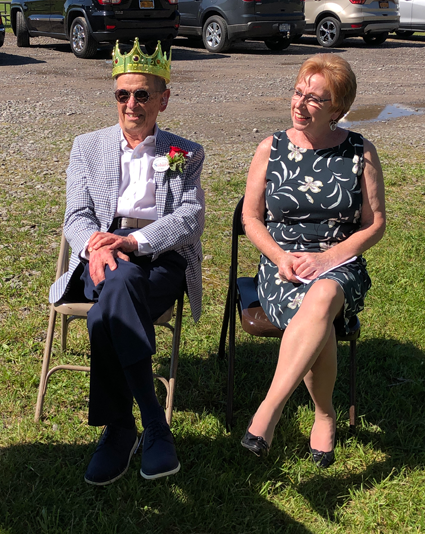 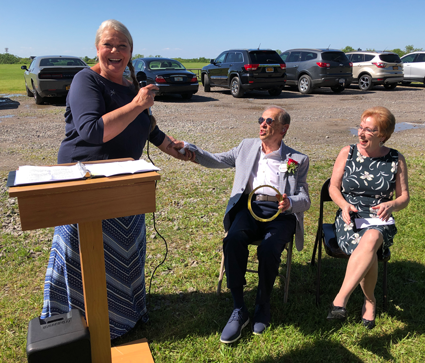 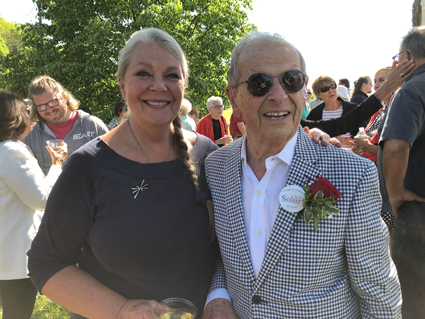 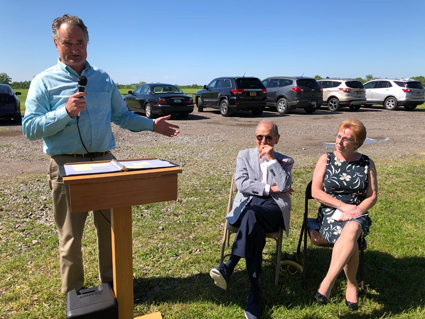 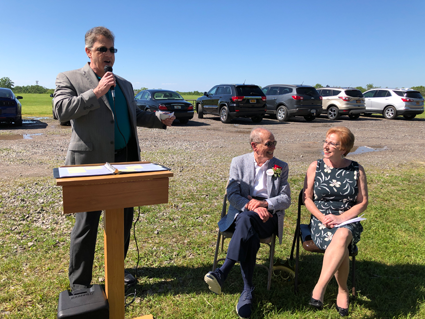 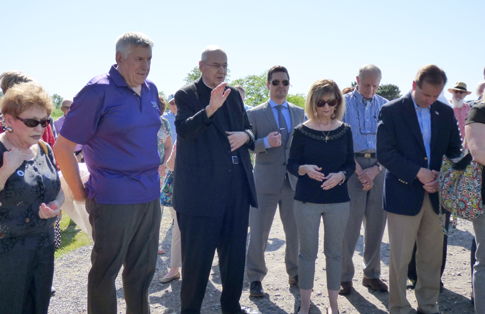 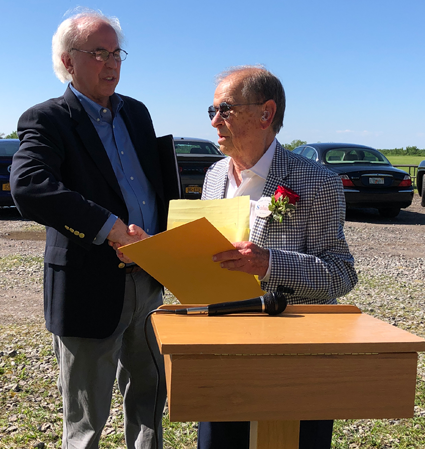 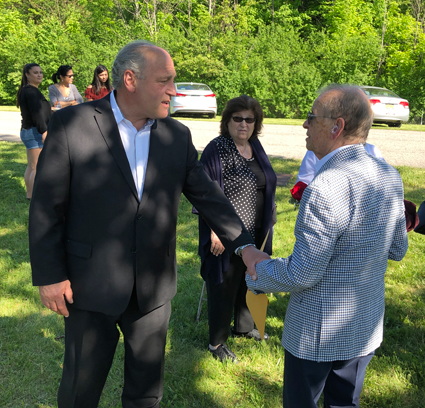 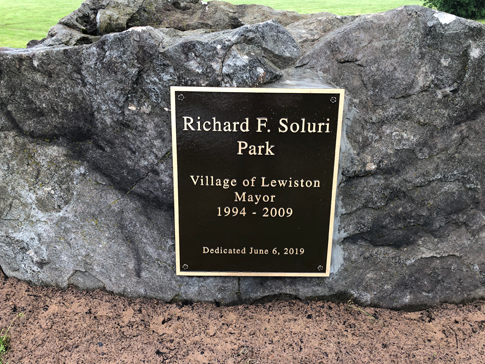