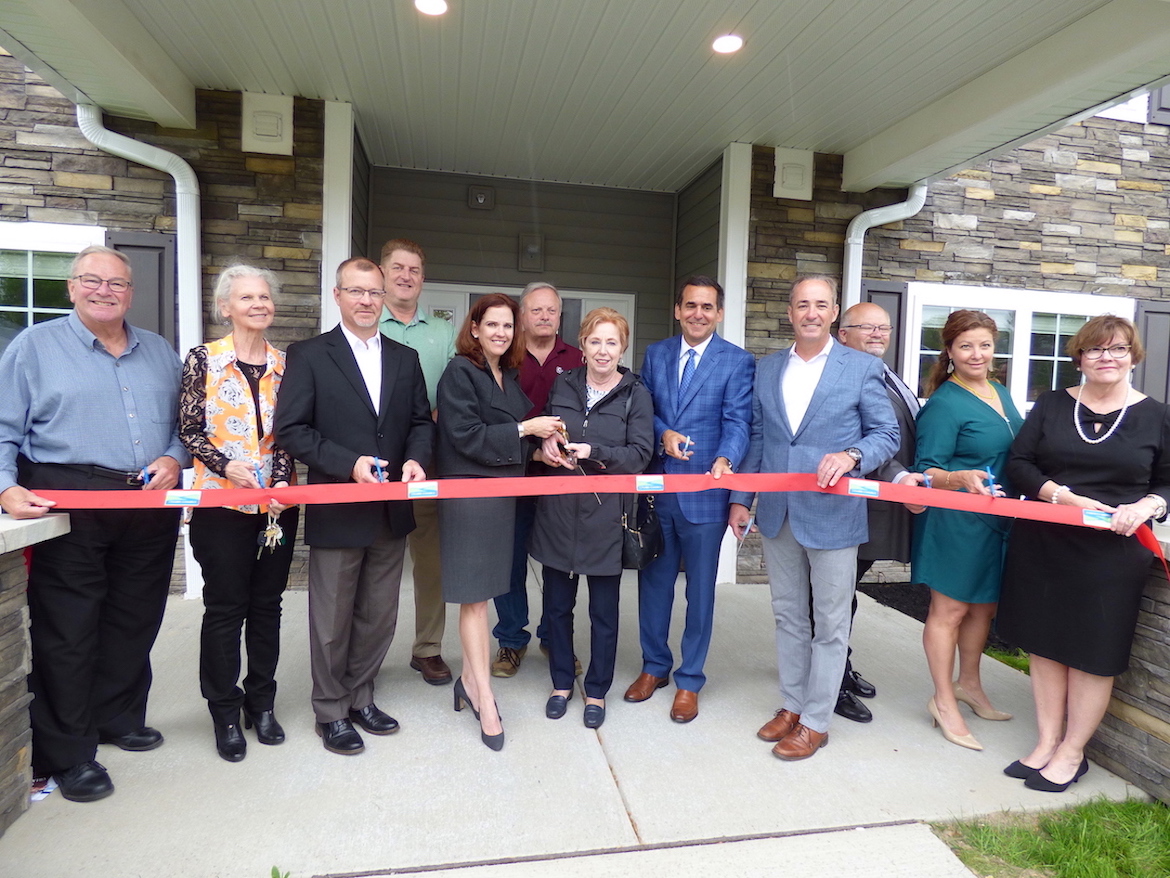 With construction now complete on 765 Fairchild Place, and people moving into the extravagant apartment complex, there was just one box left to check-off before the project was officially finished: a ribbon-cutting ceremony.

On Wednesday, the Niagara River Region Chamber of Commerce welcomed the McGuire Development Co.’s executive team to Lewiston to formally open 765 Fairchild Place. They were joined by elected officials and area business leaders.

“We are excited about new things coming to Lewiston. This is a great, great addition to the village,” Chamber of Commerce President Jennifer Pauly said. “We have a few of our board members here and elected leaders from Lewiston, and I can tell you that they are very excited about this, and about luxury living here in the village. We're just steps away from Center Street. You can see Center Street happening here. You can see more progress being done here in the village. This is the place to live. This is the place to be. We have a full calendar of events. We have a street full of shops and dining.”

McGuire Development Co. President James Dentinger said, “Jim Jerge, who was our partner on this project, we have to give Jimmy some credit. He's the one that found this site … a long time ago. And as we know, it really was a nursing home, and, ironically, McGuire Group, our sister company, is a nursing home company; but we were not involved in the project way back when. … But with that said, we liked the site. And we toyed around with saving the building, but realized it would be difficult to turn what we created – today what you’re seeing – from that existing building. So, we had to what we call in the business ‘scrape the building down,’ and start from scratch. We came up with this concept of 23 apartments and six townhomes.

“We just feel it's a really nice addition to the (Village) of Lewiston.”

Dentinger called himself “a fan of Lewiston,” and said “We really appreciate the quality of life that's up here. We're hoping to share that with some quality tenants.” 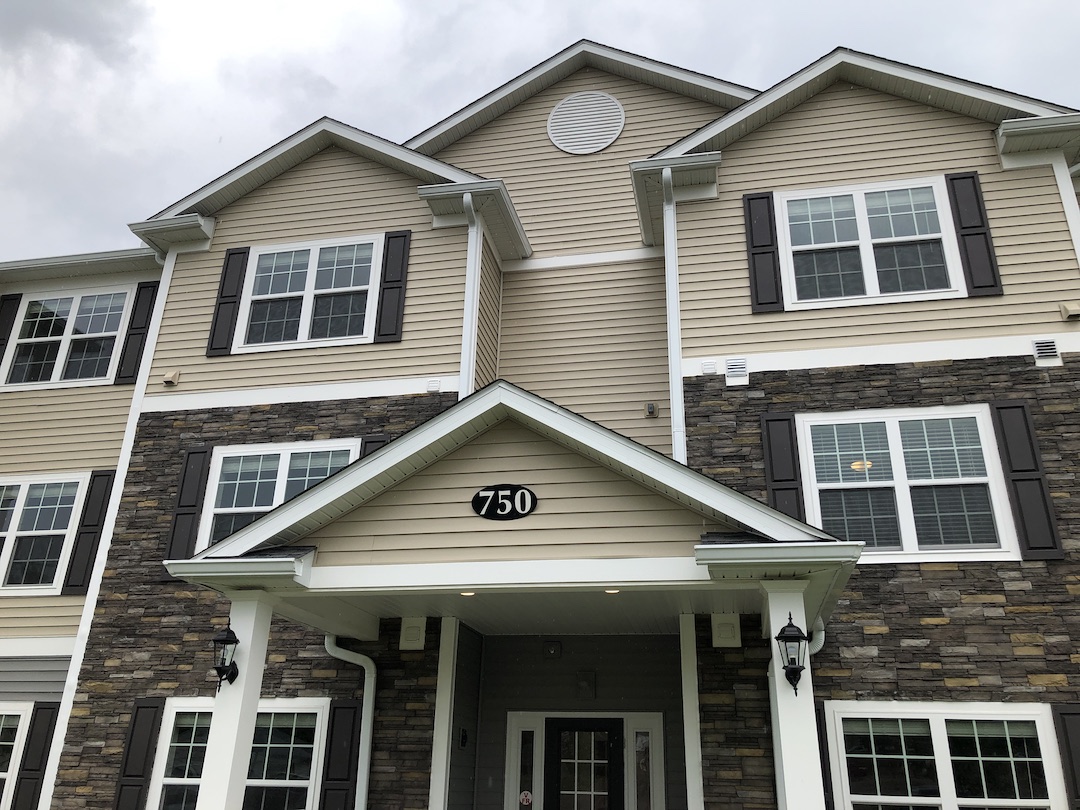 The former Fairchild Manor nursing home was purchased in the summer of 2013. Over the course of almost four years, Jerge attended numerous board meetings, working with the Village of Lewiston to get a new project approved for the site.

He said he was “Pleasantly surprised” with the final product.

“It was a long time coming, but the end result was exactly what I was hoping for. Pleased with everything,” Jerge said.

“First of all, it’s brand-new,” he explained. “No. 2, the management – the McGuire management that's going to be involved running it – is going to really assist on anybody coming in to make that new transition very smooth for them. I would think that's going to be wonderful. And it was nice that we could deliver all the promises that were promised early on at all these meetings. It was nice that we could see it through, and the end result speaks for itself.”

Mayor Anne Welch said, “It took a couple years to get it done. There was different plans with it. And I was on the Planning Commission back then. And we worked really hard with Jimmy Jerge and tried to get a nice plan together. And they were originally going to use the old nursing home, but then they found out that they just couldn't use it. So, with that, they started a whole new plan. And that's what you see today.

“It's beautiful with the apartments and the condos. It's a real asset to the village. And I'm glad that they invested in our village. It's another beautiful project that’s going to be great for the village.”

“We're just looking to bring classy ... luxury living spaces for the people out here in Lewiston,” she added. “We did a great job, our team, picking out really great finishes and appliances, and really trying to create a great-looking, functional space for the tenants to live in.

“Every unit has a patio of some sort that the tenants can go on – even on the upper floors. So, there's a great, like, indoor/outdoor kind of feel; open spaces to the kitchen and the living room. We just really wanted somewhere that people can come and feel home, and enjoy, and bring guests over, and just kind of live their life the way they want to.”

Welch said, “When you look at what was there, that old, dilapidated nursing home, that had been abandoned and a mess for years, and now you have a beautiful new building project there, it's just so great for that whole area. I mean, who wouldn't want to live next door to something like that? And with the (plaza) project across the street, once that is complete, it's going to be terrific. And the people that live in the apartments, they can walk across the street and get whatever they need. And it'll be another asset to the village.

“I can't thank them enough for their investment in our village, because we need projects like that for our tax base and just services for our residents.”

The Lewiston office of Howard Hannah Real Estate Services is the leasing agent for 765 Fairchild Place. Those interested in one of the units in the three-story Onondaga Street apartment complex, or a townhome on the Fairchild Place street side, can call 716-754-8995.

The ribbon is cut on the new Fairchild Place luxury apartments and townhomes in the Village of Lewiston. 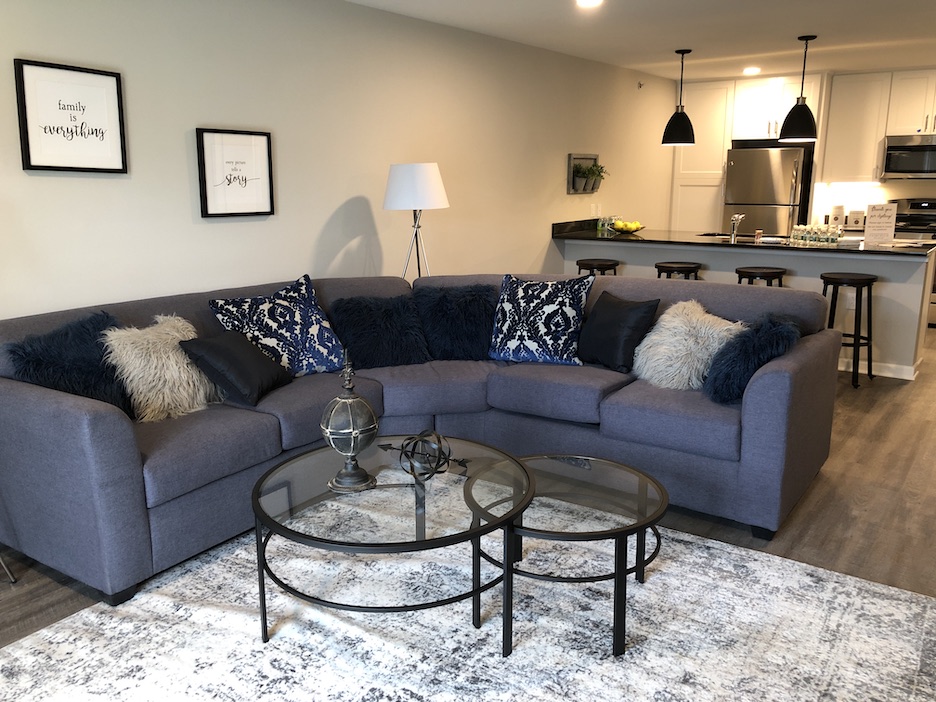 A look at some of the rooms and amenities within the 765 Fairchild Place apartment complex. 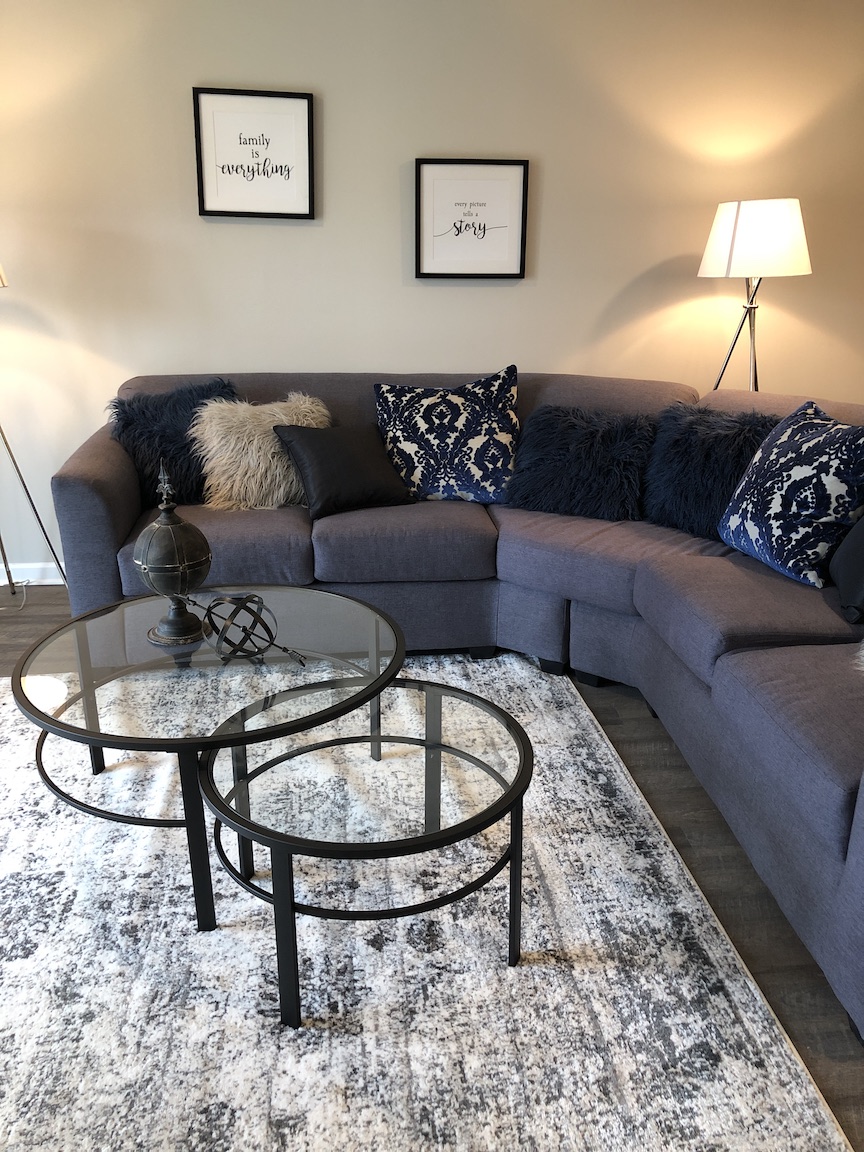 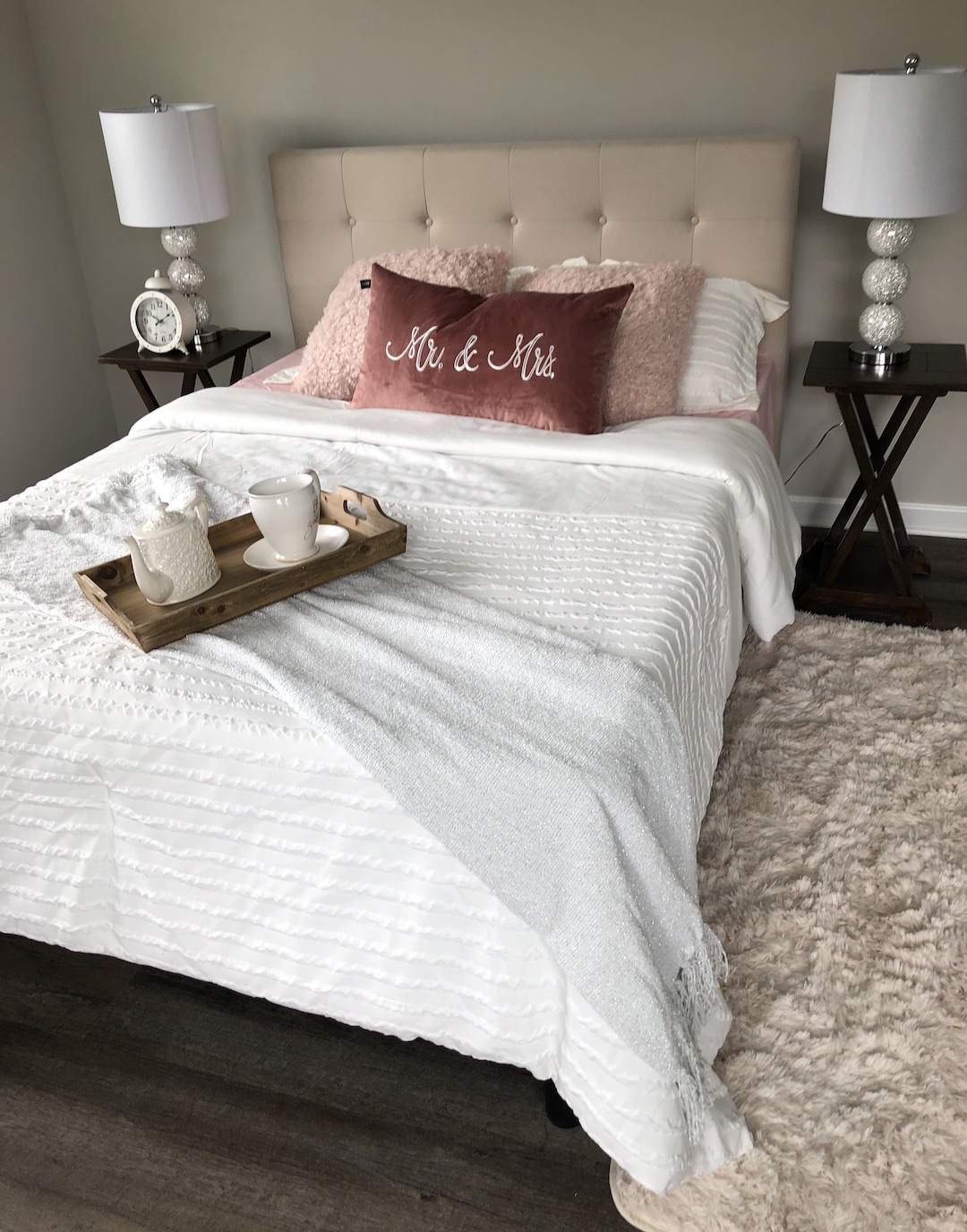 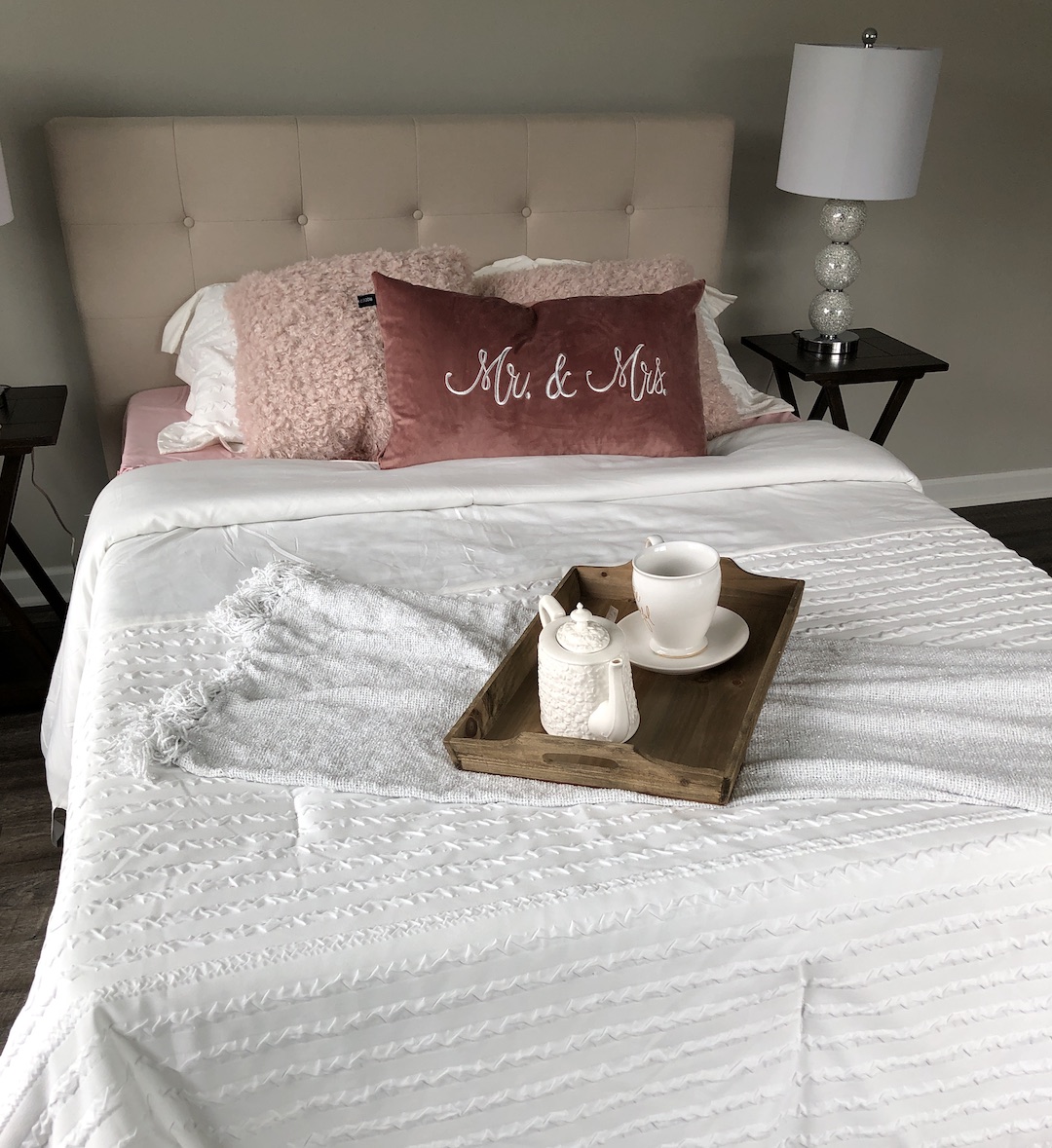 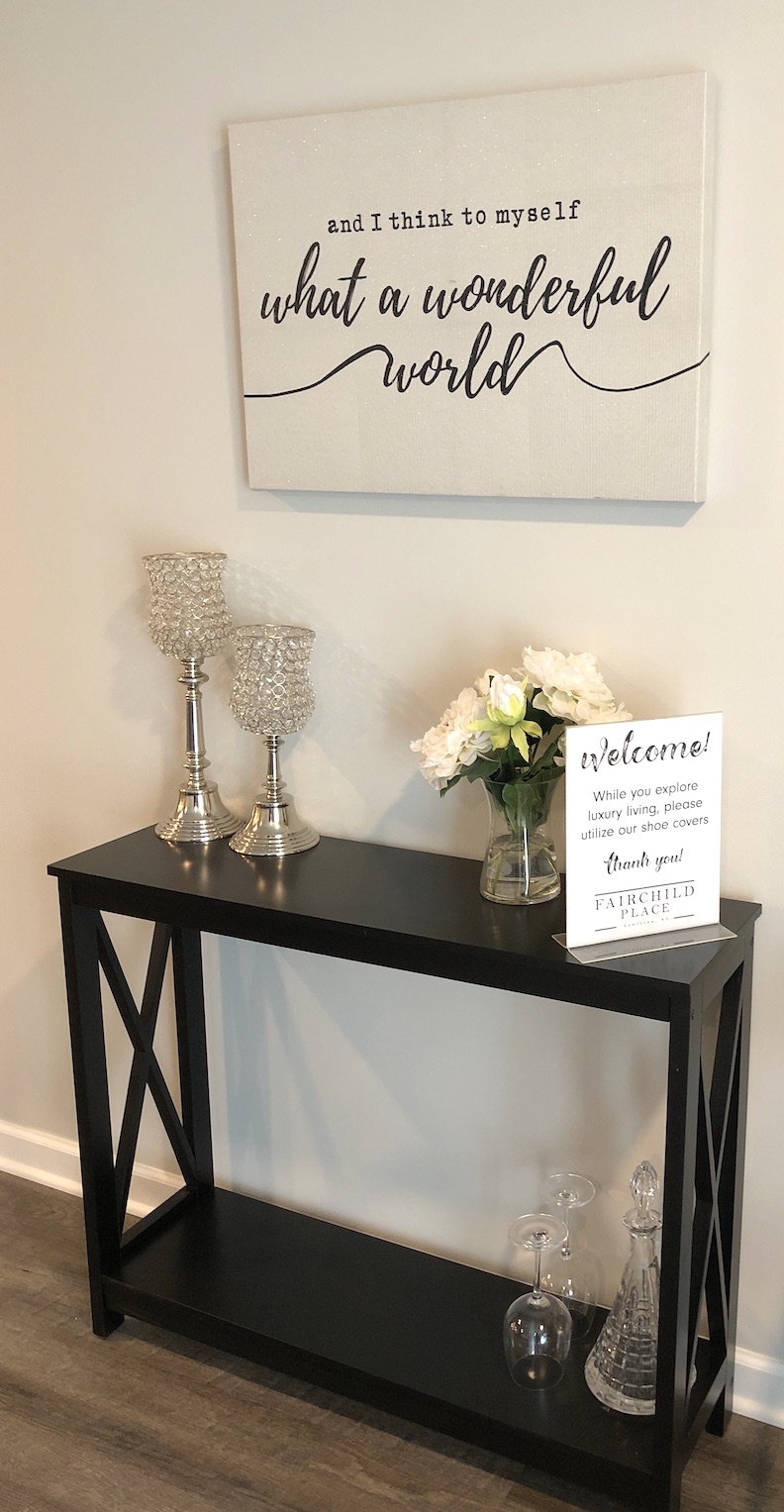 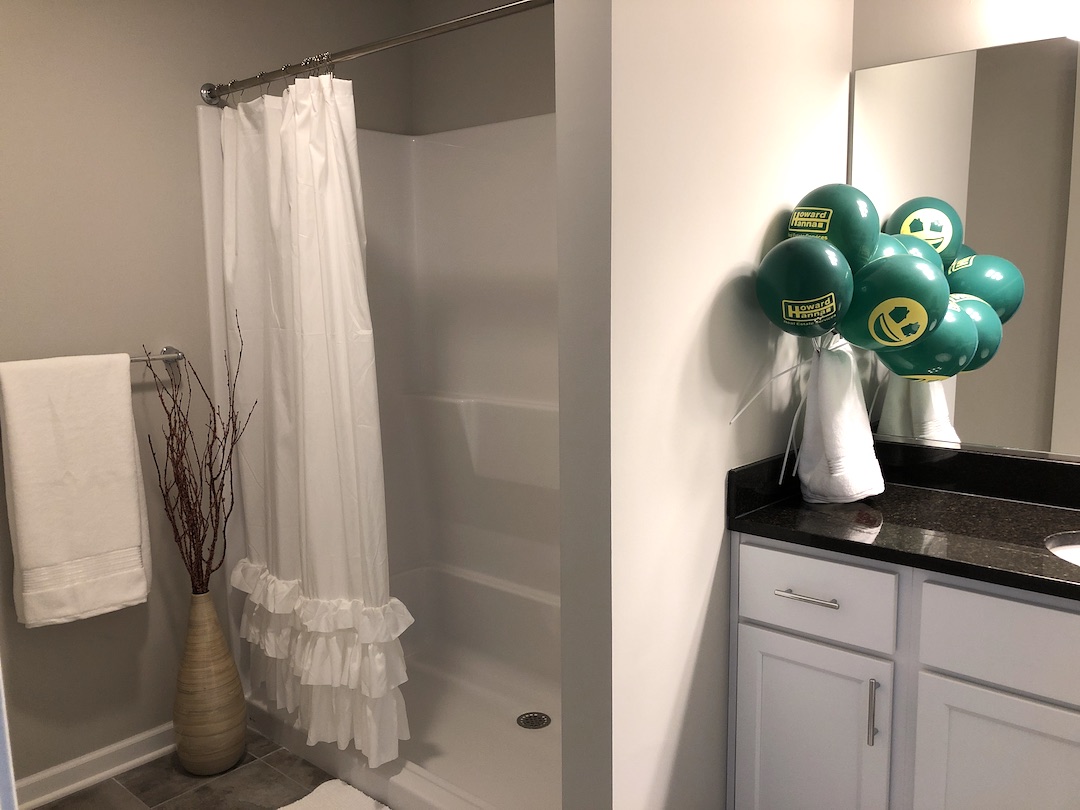 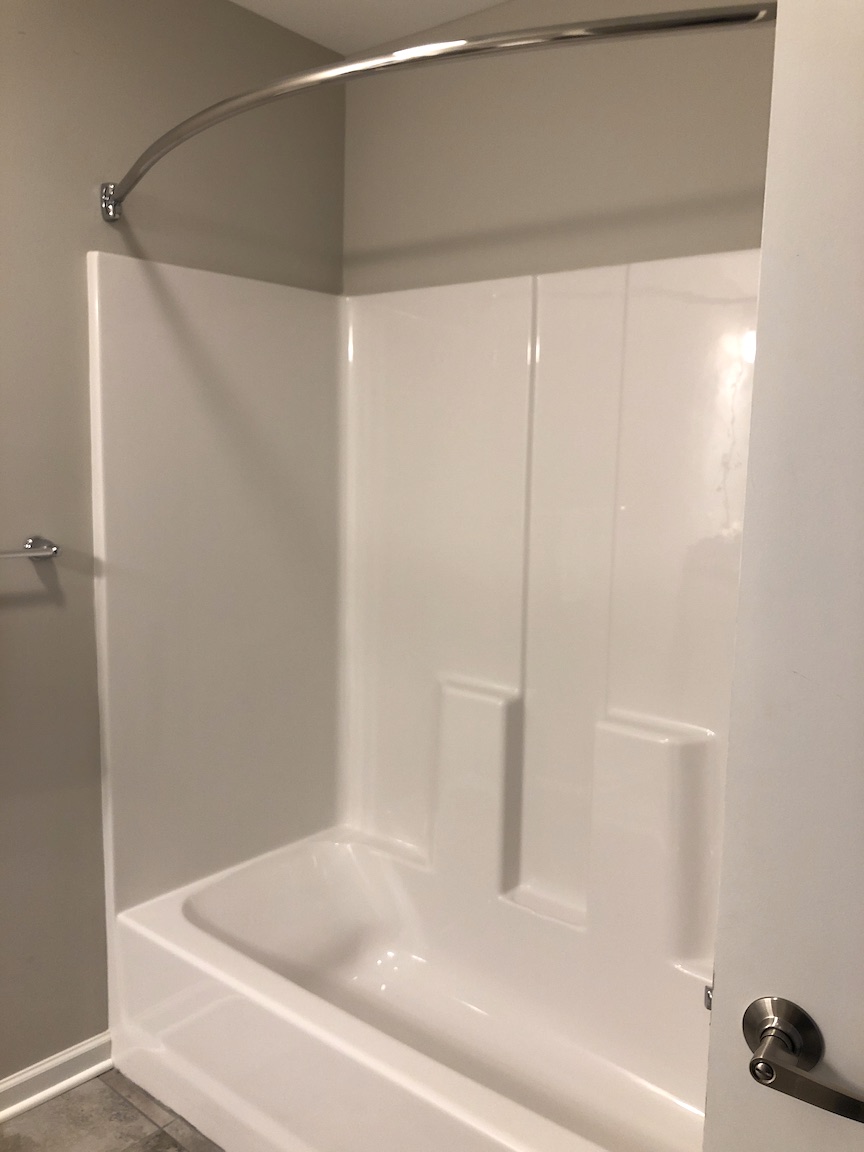 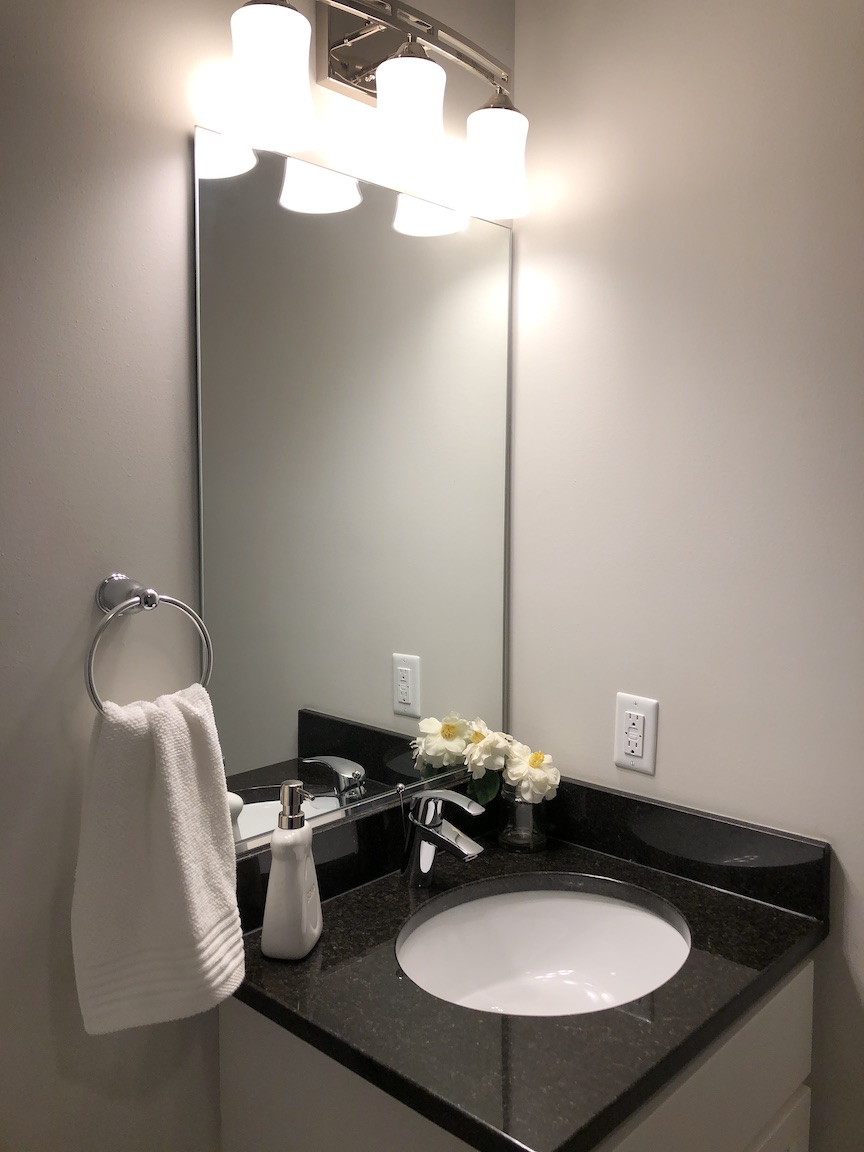 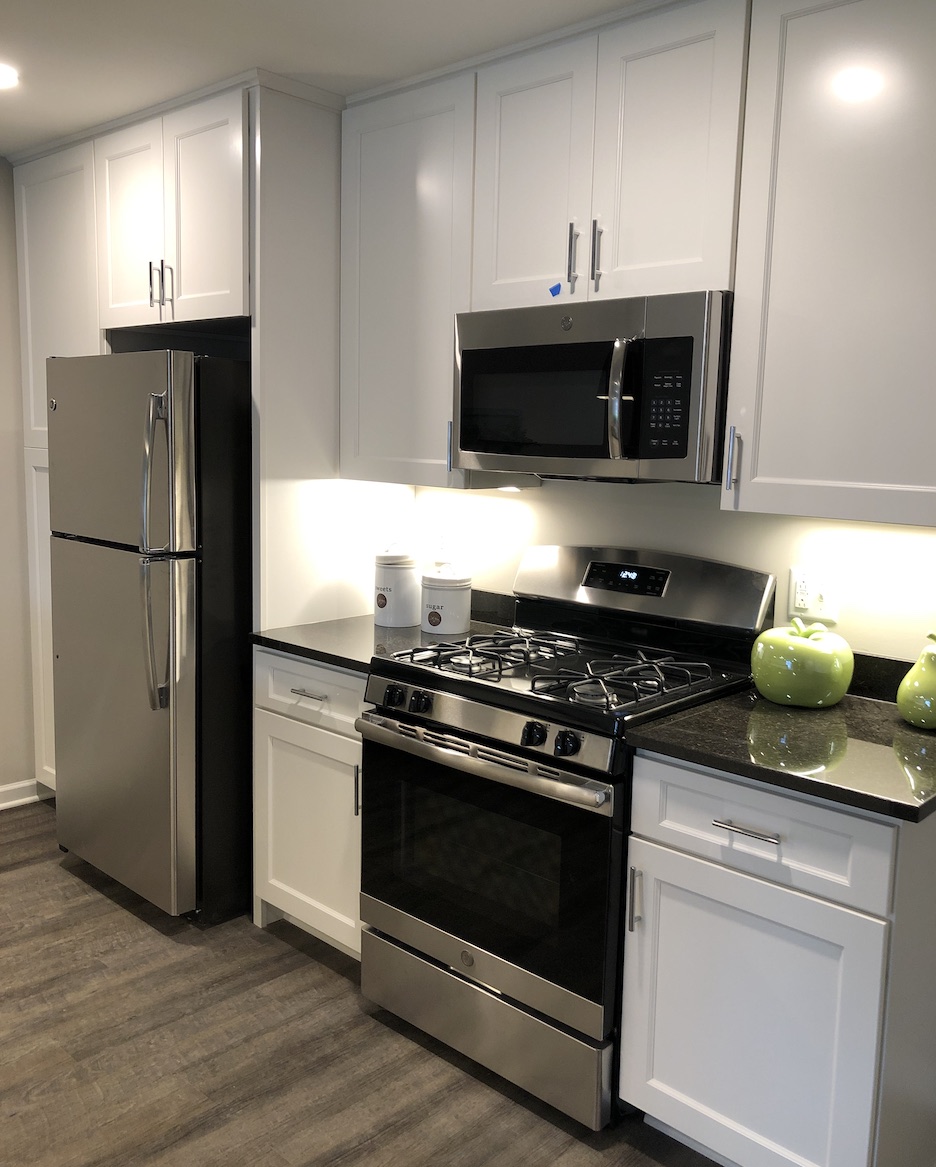 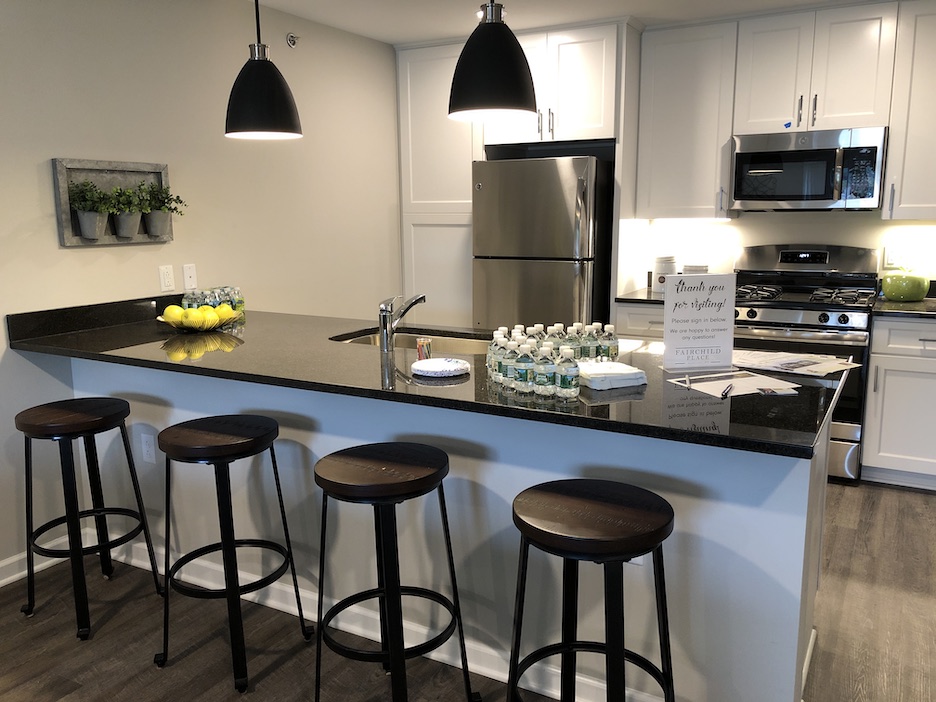 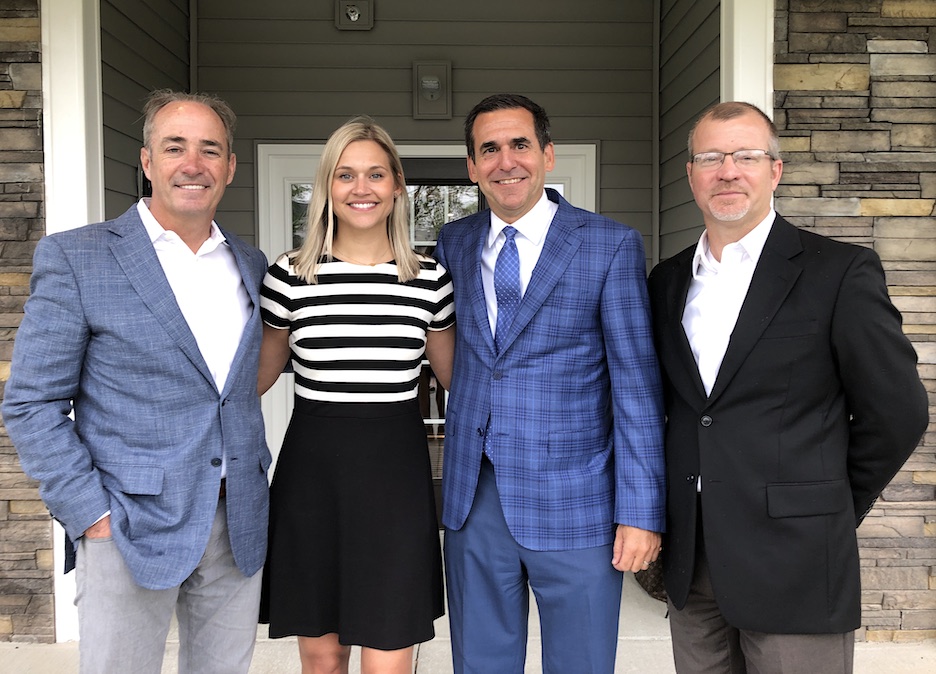 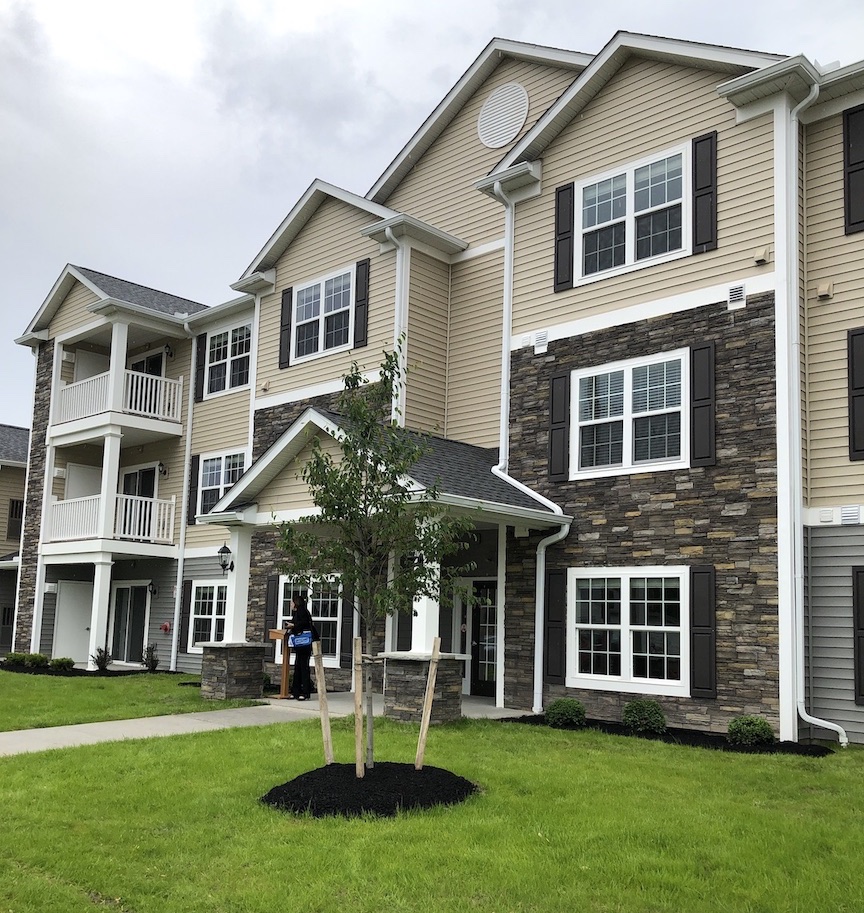 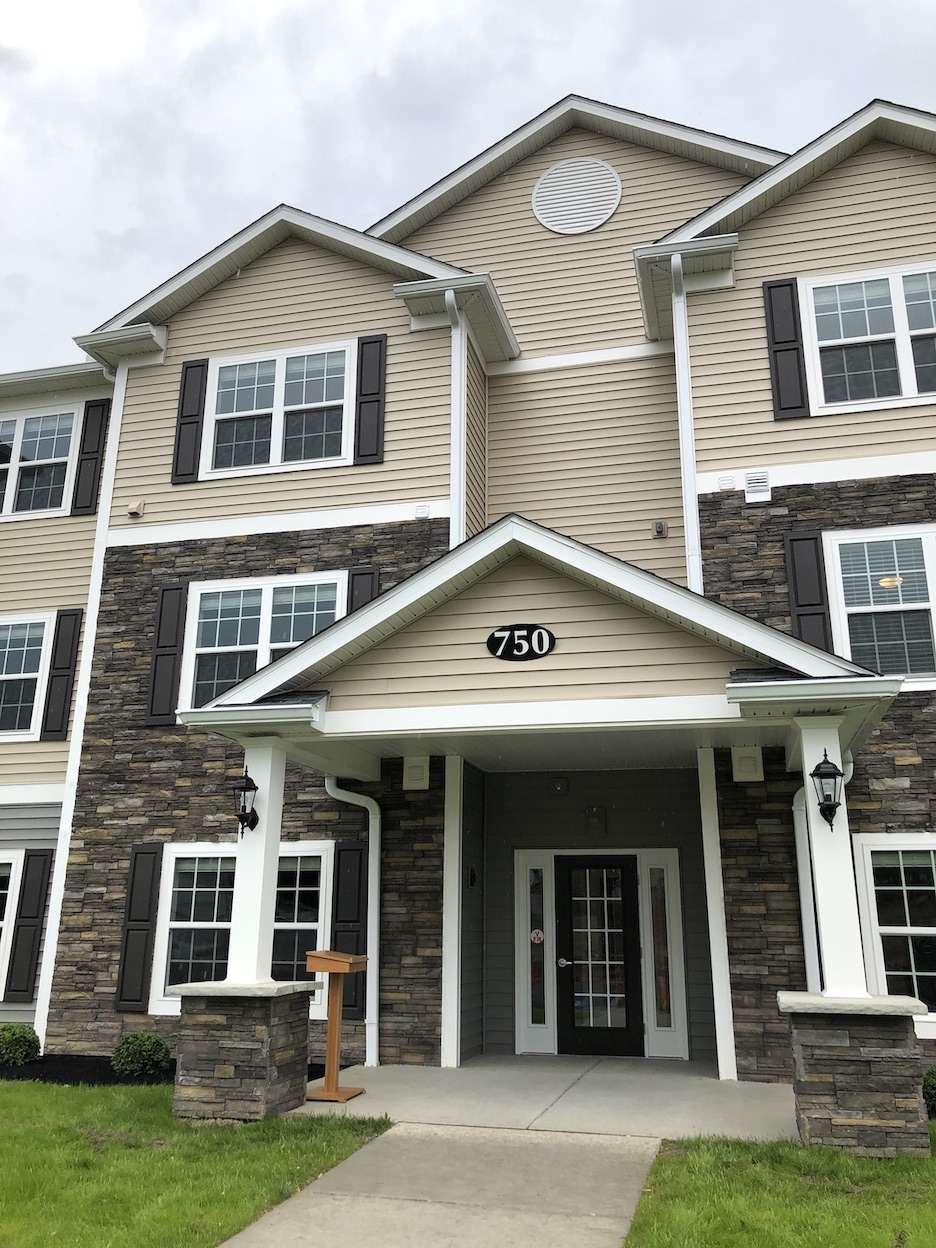