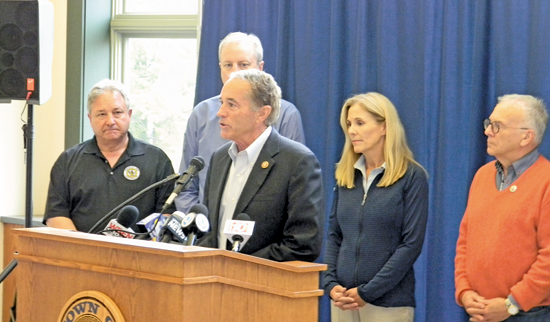 Newly appointed commissioners of the International Joint Commission spent Tuesday in Western New York, learning more about the IJC’s Plan 2014 and its shoreline impacts from the high water levels on Lake Ontario in New York state and on the St. Lawrence River system in Canada.

Included was a morning session in Buffalo with representatives of the U.S. Army Corps of Engineers. There, U.S. Section Chairwoman Jane Corwin of Clarence, joined by Canadian Section Chairman Pierre Béland of Montreal and IJC U.S. commissioners Robert Sisson of Michigan and Lance Yohe of North Dakota, had a detailed discussion with the Army Corps on the technical aspects of Plan 2014.

A “water levels listening session” with government officials from impacted communities in Niagara, Orleans and Monroe counties followed that afternoon in a program held in the Town of Greece outside of Rochester. It represented the first opportunity for the newly appointed IJC commissioners to visit the impacted Lake Ontario shoreline communities, meet with the local officials and hear their concerns.

U.S. Rep. Chris Collins, R-27, who was instrumental in the Trump administration’s appointment of Corwin to head the IJC, told attendees in Rochester they would need to be patient with the new panel.

“The key thing is the IJC with their six new commissioners have been on board only two weeks. The testimony we heard today, the comments, certainly concurs (with) the catastrophe we’ve been dealing with in 2017. We’re dealing with it again in ’19,” Collins said.

As to the new commissioners, he explained, “Jane Corwin is the U.S. chair, and when the president asked me to take a look at this, I met with Sen. Kramer from North Dakota. The three U.S. commissioners are quality individuals; they understand the problems.”

While Collins did push for a repeal of Plan 2014 and a return to Plan 1958DD – the previous regulation measure to control Lake Ontario water levels – he joined with Corwin in stressing community members should exercise patience as the IJC plans ahead.

“Let’s keep looking, sure; Mother Nature is different today than it was. But we can’t continue down this road,” Collins said. “(But) there is nothing our new six commissioners can do this year; it’s too late. Every lake is full; every lake is flooding into Ontario. Montreal, Quebec City, they’re under water. We just have to hope that Mother Nature doesn’t act up as badly as maybe she would. But the new commissioners on board, they understand the problem well.

“We’re going to get through this, with the help of the state of New York and the federal government. We’ll move forward.”

Corwin told attendees she and the other new commissioners are very much in the learning process when it comes to figuring out the two IJC plans.

“We are trying to understand Plan 2014; I think there are a lot of issues involved here,” Corwin said. “We looked at the lake levels; they at an all-time high; on the river in the St. Lawrence towards Montreal there’s been flooding for a awhile.

Béland, who has been associated with the IJC since the 1990s, defended Plan 2014, telling attendees he felt the current flooding was the result primarily of way too much precipitation over an extended period and also ongoing affects of climate change.

“With the amount of (water) we’ve had flowing into Lake Ontario, west from Lake Erie, the rainfall we’ve had in the fall of 2018, the rainfall that we’ve had this year, it is not an ideal situation,” he said. “Do we like this? No, we don’t.”

Arguing that Plan 1958DD also had its shortcomings, Béland continued, “There is no way to get more water out of the system faster, without flooding other people. We tried to balance what is happening upstream and downstream, and we’re doing what is best for both countries. Sometimes Mother Nature sends more water in, while we’re trying to exit water.

“Why is Lake Superior at record highs? Lake Erie, Lake Ontario, why are (they) all at record highs? The Ottawa River, at the same time. Something has happened, an ecological phenomenon. We’ve broke (precipitation) records, all these lakes and rivers. It’s unique; it happened in 2017 and again in 2019. I can’t answer you; I don’t know.”

Corwin reiterated the IJC does understand the desperate situation on both sides of the border.

“What we’re trying to do at this juncture is to try to get a better understanding of how the Plan (2014) has been, how it is working, so we can make the decisions going forward,” she said. “I would ask for patience; I know it is very difficult to ask for patience (when people are impacted). … I formerly represented Niagara County, the Lake Ontario shoreline. I understand what it means, what it translates into. We understand what high levels mean to people living along the shoreline. We are paying attention.

“We want to work with it, to get the best plan moving forward.”

Of the high water levels and flooding in the St. Lawrence, Corwin related, “What is happening is the board that manages the dam, they are running water out as fast as they can. The plan is not restricting them from doing that. What’s constricting them is what is happening downstream, in Montreal. The Ottawa River has been flooding; as soon as it started to lower, we raised (the level from) Lake Ontario.

“What is happening now is we’re letting the water out of Lake Ontario, but it’s keeping Lake St. Louis in Montreal at flood level. So even though the water might be dissipating from that area, we’re actually keeping it high as a way of trying to lower Lake Ontario. That’s what the control board is doing. It’s a very delicate process right now – trying to minimize flood damage not just for people on Lake Ontario, but also in Montreal.”

Corwin continued, “We have had an exceptional amount of water, precipitation and snowpack, this year and in 2017. The biggest concern is I don’t know what’s coming. I don’t know about next year or the year after. It’s frustrating, because obviously the sooner we get the information the better you can do something about it. Right now, we’re doing everything that we can, and everything that could have been done.”

Looking into the future, Corwin said the IJC in its planning needs to consider, “What is the new normal” when it comes to handling Great Lakes water levels.

“Certainly, we can look at water levels, the different levels where actions are triggered. Overall, generally speaking, we (also) have to look at the weather patterns, see what the lake levels are upstream, and consider what is a good plan, what we should do to move forward,” she said. “Is this the new normal? Or is this just an extended flooding event (like we’ve had before, in 1993 and the ’70s)? … Will it be over with in a year or two? Or is this the new norm? I think that’s the biggest question. Because if it is the new norm, then we’re going to have to come up with a plan that’s going to work in this new reality.

“Again, it’s very difficult to predict the weather in this area. But it’s certainly something we need to consider.”

Following their WNY visits, IJC members are expected to travel to the flood-impacted areas of Montreal and Quebec as they continue on their fact-finding tour on Plan 2014. Following that, IJC members will participate in Great Lakes public forums, with visits to Milwaukee and to Brockport this summer. 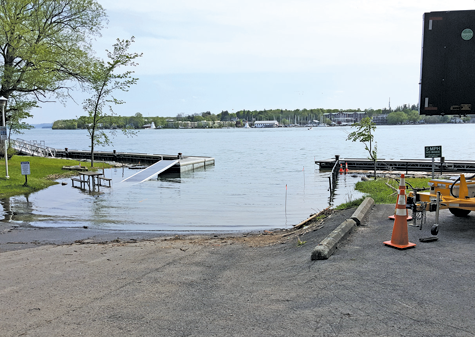