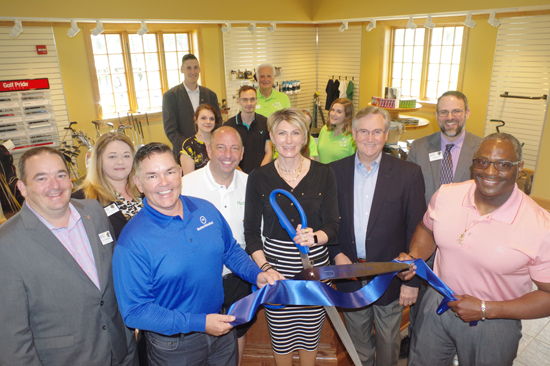 Cyndy Montana of Montana International cuts the ceremonial blue ribbon on the opening of The Hub Pro Shop in Beaver Island State Park. Also present at the ribbon-cutting were employees, members of Grand Island town government, the Grand Island Chamber of Commerce, and representatives of the New York State Office of Parks, Recreation and Historic Preservation. (Photo by Larry Austin)

Golf has a way of becoming a big part of people’s lives, as Grand Islander Cyndy Montana can now attest.

Montana, the owner of Montana International, described at the ribbon-cutting for The Hub Pro Shop, her latest business venture, how going into the restaurant business at Beaver Island Golf Course has morphed into a much larger enterprise.

“I’m so excited about this opportunity that was born out of creating Bogey’s last year,” Montana said during the ribbon-cutting for The Hub Pro Shop at Beaver Island State Park. Bogey’s, the restaurant by the golf course that she founded, “was simply a fun summer project for me” that began “over some beer” with Angela Berti, marketing and public affairs director of State Parks.

This isn’t the first golf story that begins “over some beer” one summer, but we digress.

Montana said Berti told her the state needed someone to run the restaurant at the golf course for the summer.

“And I, at the time, was in between knowing what I was going to do. I said, ‘Oh, that’ll be fun.’ And it was, but little did I know that it would turn into this and the rest of my life and not just a summer project,” Montana said.

Montana has turned the successful Bogey’s restaurant into an international company that was awarded the contract for 20 years from New York State Parks “to manage all the concessions at all the state parks on Grand Island, and that includes the golf course operations, Bogey’s, The Hub; The Falconwood, which was once the casino; the beach concessions, which we’re calling the Sand Stand; Big Six Marina, and Beaver Island Marina.”

“And the state desires that we build a campground, and that’ll happen in a couple years, hopefully. And, yes, I will bring back a version of the boardwalk grill that was beside the Falconwood way back, the casino at the time.”

Saying “rumors on this island can be crazy,” Montana added: “And, no, the company nor I have any association with Delaware North. And we want to dispel any of the nonsensical rumors that are going around that we’re going to build cabins and concessions all along West River Trail. That’s not going to happen.”

The ribbon-cutting for The Hub was attended by employees, representatives of town government, the Grand Island Chamber of Commerce, and the New York State Office of Parks, Recreation and Historic Preservation.

Montana said she was “over the moon excited” to work with the Town of Grand Island “to develop our own unique personality and build ecotourism. And now that I have been part of all the parks on Grand Island, we should be able to work together on this and push it forward. And I really think the park should be the jewel in the crown for this push for ecotourism.”

“But I couldn’t have done any of this without an amazing team,” Montana said. She pointed out that the head golf pro for The Hub, Frank Riso, has been a friend for over 20 years.

“And when we realized we needed a pro shop manager, my husband instantly thought of Frank,” Montana said. “He’s incredibly hard working. Not only did he help get this up and running, but he painted the Falconwood as well in his spare time. He’s a retired golf pro, and he’ll help us bring the service levels up to, I think, a level never seen here before.”

“That’s how we want it to be for everybody.”

Montana also thanked the Beaver Island State Park team, who she said “have been so awesome helping us transition. I couldn’t ask for better support, and I’m so grateful.”

Riso will offer grip and club repair, lessons, and fitting players for the perfect set of golf clubs “made just for you,” Montana said. “We’re also going to work on keeping like the pace of play consistent, so all the golfers can enjoy their experience.

“Our league players are getting added value this year, and with your feedback, we’re just going to keep getting better and better.”

Riso said The Hub will make a long-term effort for a quality golf experience with a faster pace of play. “We’re going to make an effort to have the quality of the experience really positive and help people move along and enjoy themselves on the course,” he said.

Montana said the entire team at Bogey’s has returned from its inaugural season last year, “So we have a great foundation and we’ve added some awesome people to the team. I think they’re going to be amazing and I want to put them to work. We just need some good weather to do that.”