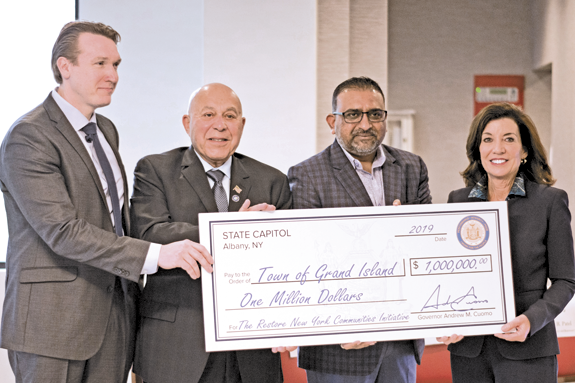 The check presentation is the last chapter of the decades-long effort by town government to redevelop the former vacant building and chronic eyesore.

Empire State Development announced Friday that $1 million in Restore NY funding has been provided to Grand Island Hotel LLC upon the completion of the $8 million Holiday Inn Express.

According to ESD, Restore NY “supports municipal revitalization efforts by awarding funding for projects that will reinvigorate downtowns and generate new economic opportunity in communities from Western New York to Long Island.”

The $1 million grant for asbestos abatement was first announced in Niagara Falls by then-Gov. David Paterson.

Patel invested five years of demolition, renovation and design work to convert the vacant 73,000-square-foot building. It had been vacant since 1993. Rudra Management and Rosewood Hotels purchased the former Dunlop Building in 2014 for $850,000, according to ESD.

“It has taken us a long time to complete this project, but we were driven to transform this well-known building into a point of pride for area residents and a beacon for drawing visitors to the region,” said Patel in a statement. “We look forward to serving tourists visiting Niagara Falls, business travelers and families looking to enjoy the region.”

“The Holiday Inn Express on Grand Island is a boost for tourism in Western New York, and New York State is proud to award funding to make this transformation a reality,” said Hochul at the hotel Friday. “Removing asbestos from an old structure is an expensive undertaking. The Restore NY program exists to allow our state government to partner with private industry to benefit communities across New York. This building that has sat vacant for decades as a blight on the community has now been repurposed for the future, creating jobs and economic investment.” ​

McMurray gave those assembled for the check presentation a brief history of the property, variously called the Hooker Building or the Dunlop Building.

“This is an amazing change. For decades and decades that location sat as an eye sore, a wreck, a haunted house,” McMurray said. “Now it’s a beautiful hotel. And the area around it, thanks to a creative public private partnership, has also changed. It was zoned for generations as prime commercial real estate but sat empty. Now, it’s ready for more.”

“The old Dunlop building has gone from an abandoned eyesore to a new hotel, a transformative symbol of how Restore NY funding can help to create economic assets from once-blighted properties,” said Empire State Development President, CEO & Commissioner Howard Zemsky in a statement.

Hochul spoke directly to Patel and praised him for “your investment and your belief in the possibilities of Western New York.” She thanked him for “breathing new life into a building.”

“So for a quarter of a century, people have driven by on this highway, literally millions of individuals, to see just a ghost of the former jobs and opportunities that once came in this building,” she said. “So to bring it back to new life, to give it not just a facelift externally, but to create a welcoming experience for travelers to find their way to magnificent Grand Island … I want to thank you on behalf of the governor of the state of New York for helping us turn the corner. You’re part of the great success story here in Western New York. And even a few years ago, I’m going to venture even 10 years ago, people would have said, well, why would we do it right there with people just passing through. Grand Island has never been a pass-through community. This is a rich community. It is a community where people are tightly knit and I want to thank Supervisor Nate Murray for your exceptional work here leading this incredible community with its great assets, making sure we got cashless tolls something that I appreciate as a frequent traveler here that was important to the residents but also the commuters to feel a more welcoming.

“The attractions we have here, whether you’re going to Kelly’s Country Store, or Dick and Jenny’s or you’re heading over to Fantasy Island or Beaver Island, there are great attractions right here. So we want to encourage that, so that people will understand how magnificent this beautiful community is as well.” Redeveloping the former Dunlop building was the highest economic priority for the town when it requested funding to make improvements to the abandoned and heavily vandalized eyesore in an effort to transform the prominent property and encourage economic development at the highly visible location.

ESD implements the Restore NY program. The initiative requires the new owner of the hotel to spend at least $2 million on remediation in order to receive a $1 million dollar Restore NY grant, which in this case was used for asbestos abatement. Cities, towns and villages are all eligible to apply for support for projects that include demolition, deconstruction, rehabilitation or reconstruction of vacant, abandoned, condemned and surplus properties. Projects located in economically distressed communities are emphasized and encouraged.

The work to redevelop the building goes back more than 15 years. “Completion of this project has been my personal goal since I first ran for the Town Council (in 2004),” wrote former Councilman Gary Roesch.

“There have been many individuals, companies and residents that have given their thoughts and ideas for what this facility could or should be,” wrote Roesch. “I have seen many concept plans, architectural drawings from potential developers. I have listened to ideas, promises, commitments that have had visions of some sort of completed project. Most were looking for other investors, grants or some sort of outside assistance. I applied for and obtained from New York State Empire Development Corporation a grant for $1 million in 2009.”

“Many people assisted in this project,” wrote Roesch. “From the Grand Island Town Board, Grand Island engineering, assessor and building departments, as well as our planning and architectural review boards. Most importantly, if it was not for New York state, Erie County Industrial Development Corporation and the Erie County Health Department, we would be looking at this eyesore for many years to come. Finally we can be proud of the building at the entrance to the north end of our wonderful Island.”

McMurray said, “When I was running for office on Grand Island, I visited Jay at one of his hotels, and I told him, look-it Jay, if I win we’re going to open that sucker or I’m going to quit politics. And he looked at me like ‘You are crazy,’ but he was kind enough to have lunch with me. And I came back to Grand Island determined to get it open. It wasn’t easy. There was a lot of obstacles. Thank you to the folks from Empire State Development in the back, who worked with me consistently, but most of the credit has to go to Jay.”

McMurray pointed out the other elements of the team effort involved in the rebirth of the building.

“I want to make that point in one more time. This building was not just an eyesore. It was a danger to our community. You can see the pictures of what it used to look like. When I first stepped into this building, it was covered with graffiti. There was water coming through it. There were holes in it, kids were playing in it. It was a virtual haunted house. But because of the efforts of Mr. Patel, his family and his team, we have this building because of the support of the lieutenant governor and the governor. We have this building, and I’m proud to be part of it.”

According to ESD, the hotel includes a breakfast bar, two meeting rooms, a business center, an indoor pool and a fitness room and a rooftop lounge for guests. The hotel is creating approximately 32 jobs. The company currently has more than 52 hotels in its portfolio, with most of them located in New York State.

Morinello said, “It is a pleasure to participate in the dedication of the Holiday Inn of Grand Island. This building sat here as a mystery for many years without any foreseeable future, however, now it not only has a future, but it also is an asset to the region. This shows what a public and private partnership can accomplish. Thank you to all who made a dream become a reality.”

McMurray said, “I hope for years to come we can make this building continue to be prosperous. We’re 10 minutes from the Falls. The West River Trail is just down the street. I’ve come here before with my family. I would encourage you to bring your family here. Have a staycation. Go in the pool. This is a great facility. And I feel because of the efforts we made here, there’s going to be more development in this space around this building. It is not valueless. The value is up to us.”