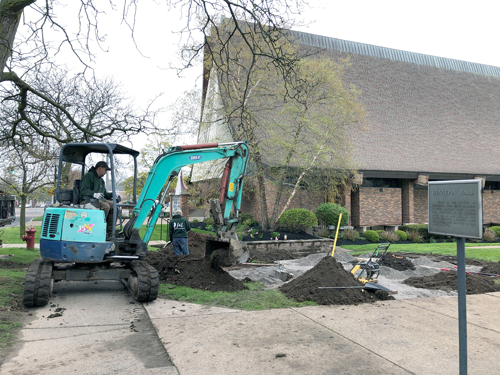 The scene outside of St. Peter's R.C. Church rectory on Monday.

Lewiston hit by wave of construction

The normally picturesque Village of Lewiston was anything but on Monday, as new construction was underway at three different sites.

At the waterfront, a team led by Mark Cerrone Inc. is feverishly working to shore up the shoreline. Crews are rebuilding – and lengthening two feet – walls impacted by 2017 flooding. When the project is complete, it will include new floating docks, which are better suited to handle the recurring rising water levels.

While repair work is underway, the north side of the shore must be shared by recreational boaters, fishers, and Whirlpool Jet Boat Tours. Staffers from the latter are escorting patrons from WJBT headquarters down the pier to the boat launch below The Silo Restaurant.

While this is happening, the launch’s adjacent parking spaces are closed to the public.

“They can't park down there, and we don't want pedestrians down there. We don't want anybody to get hurt. We want it to be safe,” Village of Lewiston Mayor Anne Welch said.

She explained that, while the shared usage scenario isn’t ideal, the boat launch is open for use.

Welch said she expects the docks and parking lot to return to regular use this summer. For now, “We took the parking away, because we can’t have people, pedestrians, sitting down there, because of the congestion and the swing of the boats and everything else. We just don't need anybody down on that dock that doesn't need to be there. They're welcome to stay up on top, and see the views just perfectly up there. But yeah, anybody that doesn't need to be down on that dock cannot be.”

Welch said recreational boaters can launch into the Niagara River, and then park on Water Street. Fishermen have access to an area north of the WJBT site and just ahead of the pier’s northernmost area, which is fenced off.

On the other side of the temporary WJBT floating dock, more construction can be seen below Water Street Landing.

This repair work also is delaying use of The Ridgecomber Marina, a neighboring docking port owned by Lewiston residents Harry and Suzanne Buckholtz. In a letter to their slipholders, they wrote, “Both the water level and the major project next door have created inconveniences for us this year, for which we have no easy answers. Thank you for your patience and we hope that these issues won’t disrupt the boating season too much.”

Welch said the situation is “temporary.”

“They're going as fast as they can,” she said of construction teams. “They’ve had to deal with the weather. They can't drive the sheet piles when it's raining, because they use a torch and they can't use the torch in the rain. But they are doubling up, I believe, and trying to get it done as best as possible.”

Not helping matters was the amount of time it took for repair funds to be secured.

“We’ve had insurance company, FEMA, and the state – all three. Everybody had to coordinate, and there was a lot of paperwork to be done to get this out,” Welch said. “It wasn't just one person saying, ‘OK, here's your check, go ahead and do it.’ There was a lot involved.”

WJBT’s use of the boat launch area has riled some pedestrians. One, Kimberly Sabol Lawson, created a hashtag on Facebook that reads #keeppublicspacePUBLIC.

In a Facebook message, she said, “I have a few issues with the decision made by the mayor regarding allowing the Jet Boat to launch from the sand dock. This decision has restricted access to a public dock so a commercial company can use it for its own gain. It impacts not only anglers, like myself, but charter boat captains, boat owners and tourists who just want to enjoy the beautiful view of the Lower Niagara. Charter boat captains will now have to deal with the congestion of having buses on the dock while they are trying to launch (while) residents that are unable to walk up and down the stair are having their access restricted totally.”

She added, “I know this is temporary (…) however temporary, it is not fair to the people that utilize this space on a regular basis. I would like to see a different solution because launching from the sand docks is not a good one.”

Welch said, “We have a contract with (WJBT) that says they are allowed to operate. We can't just say, ‘Well, you know what, just close down for a couple months till we get this done.’ That's loss to their income and their revenue. So, we're not going to do that. We're going to try to accommodate everybody that needs to be down there.

“And like I say, the fishermen, we don't want to tell them they can't fish there. Everybody's just going to have to work together. …

“It's going to be beautiful when it's done; and I'm sure everybody will be pleased with the outcome. It's just that good things take time.” 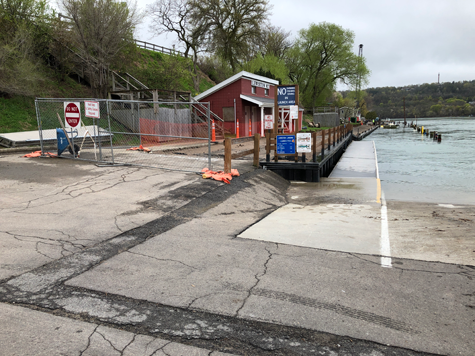 Next to the boat launch area. 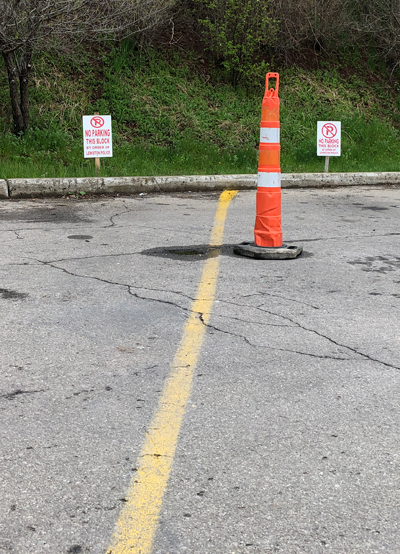 The parking lot is temporarily closed. 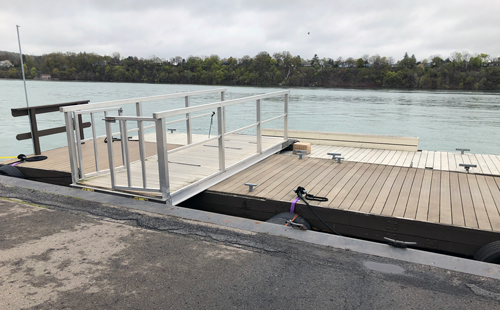 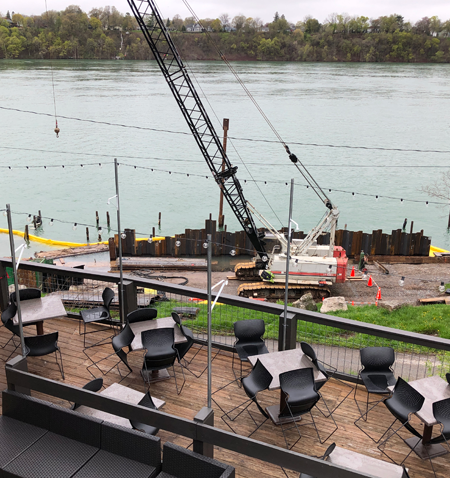 This is the sight below Water Street Landing (above), and another behind the restaurant. 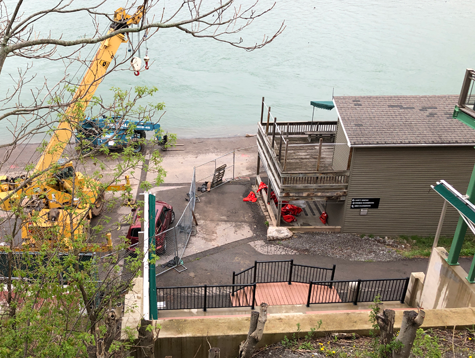 Lewiston’s largest business, DiMino Tops, has sectioned off its parking lot to allow for paving. Work is expected to continue until the weekend.

With construction vehicles out in front, and the Center Street entrance closed, it might appear the supermarket is shut. However, store owner Anthony DiMino said, “We’re open for business.”

He explained, “I did have signage up, but the village told me to take it down. So that’s why it’s a little more confusing.”

Tops is accessible from its South Ninth Street entrance.

After a particularly harsh winter, DiMino said paving was necessary.

Patrons can leave their cars in a smaller designated area within the main parking lot, or station them across the street at the foot of Academy Park. 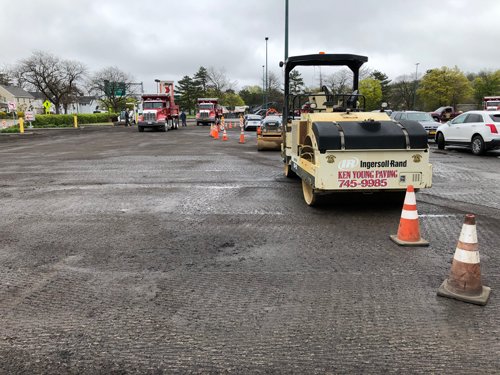 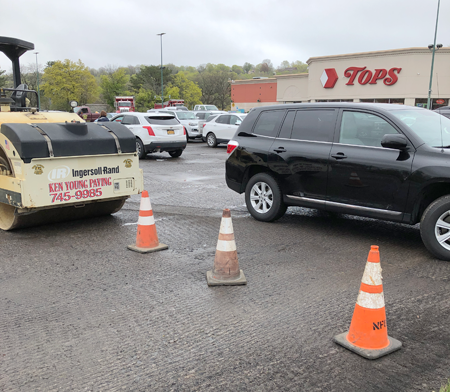 Outside of the St. Peter R.C. Church Rectory, a trio of workers from J&L Premier Landscape was preparing the grounds for the installation of a statue of Mary. Niagara Catholic High School’s former 66th Street sculpture is relocating to Center Street. A dedication ceremony will take place at the 10:30 a.m. Mass on Sunday, May 26. 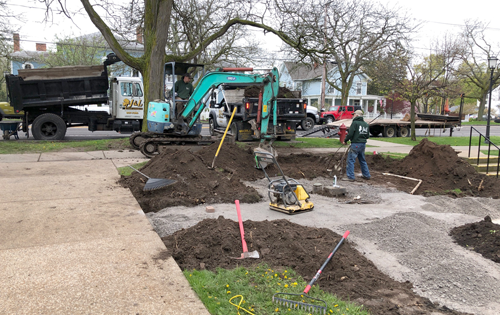