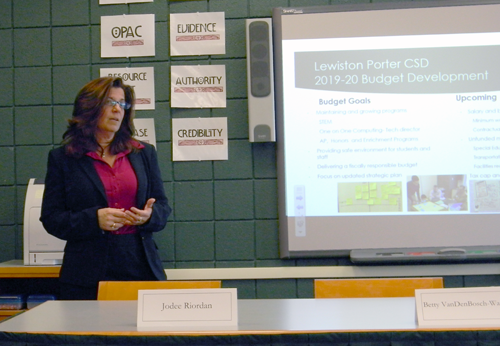 Attending Lewiston-Porter residents learned more Tuesday on what the $48.487 million district budget for 2019-20 entails – its goals, district concerns, what went into its development, and what Lew-Port students and the community can look forward to over the next year.

“Every year we look at what we do to maintain and grow programs,” Grupka said.

She said the priorities for Lewiston-Porter students in the proposed spending plan are focused on STEM; one-on-one computing and instructional support; maintaining current offerings such as student immersion and AP Honors, and providing a safe community for students and staff.

“We always also have to look at the fiscal responsibility of the budget,” Grupka said, adding that district residents, unlike municipal taxpayers, do have a say on this.

Pointing out that Lewiston-Porter also has to work within the state’s mandated 2% tax cap, Grupka, she said that “for revenues and expenses at the end of the day they have to be the same number.”

Lewiston-Porter’s revenues include the tax levy, state aid, and fund balance. Grupka called this “our rainy day money.” Lewiston-Porter, which is regarded on the state level as being a “high-income district,” sees the greatest portion of its revenue coming from the tax levy.

“You project your local revenues, estimate your state aid, look at all of your programs and costs, and what you want to do” – items under Lewiston-Porter’s Strategic Plan.

“(You) analyze how the levy is to be used, and the levy divided by the assessment equals the tax rates.”

“So we are proposing an increase to the levy. To do that we (have) $1.7 million of fund balance. That is a tremendous amount of fund balance for a budget our size,” Grupka said.

She said some of that was preplanned due to outstanding debt. “We knew we had four years where capital debt load was going to be a little higher.”

“So what you actually look, after those two numbers are fluffed over, it’s really very, very little,” she said of state aid to the district.

As to the budget itself Grupka said it includes the program component – the cost of educating Lew-Port students (teachers, the cost of athletics, transportation, special education support, etc.) That eats up 71.4% percent of the budget. The capital component (the cost of district improvements, capital repairs, debt service, largely funded from state aid) is 21%. The administrative component, the cost of running the district is 7.4%.

Of Lew-Port’s $48.487 million budget, that translates to $34.6 million for the program component, $10.2 million in capital and $3.5 million in administration. She said under the current plan Lew-Port would utilize $27 million from the tax levy revenue at 1.99% with remaining monies derived from PILOT derived sources in the district, state aid including New York Power Authority funding and Greenway funding, plus the aforementioned $1.7 million in fund balance.

As to the financial impact – to the taxpaying property owners in the towns of Lewiston and Porter, Grupka said this would vary due to a situation of unequal assessments that exists between the two towns. Both have changed over the past year.

Lewiston-Porter currently has a student enrollment of 2,000, including out of district and international students. That number does not include Lew-Port’s pre-K students.