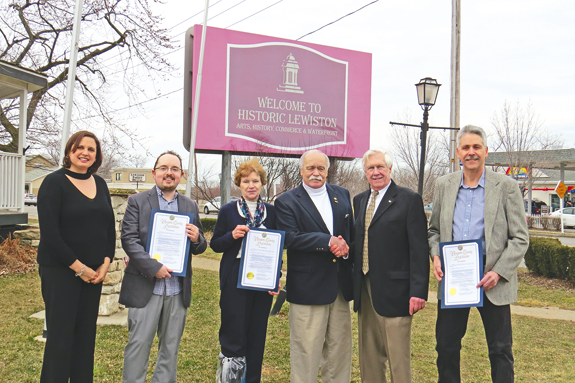 The chamber board of directors will present awards to Business of the Year and Citizen of the Year honorees from the Lewiston, Youngstown, Ransomville and Sanborn communities.

Niagara Frontier Publications has been chosen as the 2019 Chairman’s Partnership Award recipient by the Niagara River Region Chamber of Commerce board of directors and Chairwoman Christine O’Hara. We are proud to have a company that believes in the value of local news reporting and promoting our businesses, residents, achievements, organizations and community.

The publishing group began operations March 6, 1944, with the Grand Island Dispatch. The Grand Island PennySaver was added in 1950. Over the years, Niagara Frontier Publications has served the community under various owners. Today, NFP is owned and operated by Skip and Judy Mazenauer of Grand Island.

Two additional newspapers were added in Niagara County – the Niagara-Wheatfield Tribune in 1985 and Lewiston-Porter Sentinel in 1987. NFP’s weekly newspapers are printed year-round with a local emphasis and coverage on the community – town/village governments, school districts, churches, businesses, the arts, local organizations and its people. The Dispatch, Tribune and Sentinel are the official papers of the towns and villages they represent.

NFP’s online source, www.wnypapers.com, was added in 2010. It provides insightful news on the communities it serves and goes beyond with regional coverage of Western New York – be it in-depth features, spotlights on area businesses and local personalities, newsmakers on the arts and entertainment scene, video and photo highlights, plus local contests and much more.

For the past 75 years, NFP’s business model has been focused on the stories and events that happen in our neighborhoods. Skip, Judy, NFP’s editorial team and its production, sales and office staffs are all familiar faces in the community – particularly Editor-in-Chief Terry Duffy and Managing Editor Joshua Maloni. They volunteer on boards, teach and mentor at our local colleges and serve as members of nonprofit organizations. The success of Niagara Frontier Publications is due in large part to its personal involvement and connection in the community.

Our region reads The Sentinel, Tribune and Dispatch from cover to cover. The promotions and stories are often centered on the major events and festivals encouraging commerce in the communities. Special brochures, maps and guides are also created and promoted to enhance the region. Skip, Judy and their staff help showcase and feature small businesses in different ways each week, from advertising to advertorials and articles.

The chamber honored NFP in 2006 for the company’s “dedicated efforts to instill pride in the residents and leadership of the River Region and play a major role in the success of our events and festivals.”

We could say that is still true today. However, the connection goes deeper. In a time where news moves fast and can be spread to thousands in a single click, the weekly papers are a reminder that people matter.

There is a relationship between the reader and the paper – a true connection that exists because of a sense of trust and the hard work of those who bring the stories that matter to us. It doesn’t matter if the photo or news event occurred days earlier – everyone loves seeing their photo or article in The Sentinel!

O’Hara said she is appreciative of all that has been done over the years by NFP to promote the area and support the chamber. “Skip Mazenauer and Niagara Frontier Publications is always there to tell the story about the Niagara River Region Chamber of Commerce and the businesses we represent. The willingness to get the word out, whether an in-person interview, presence at an event to capture the visual essence, or overall sponsorship; your generosity continues to grow from year to year, and we thank you for what you do not only for the chamber, but for the entire community.”

The board of directors of the Niagara River Region Chamber of Commerce proudly congratulates Niagara Frontier Publications for a community-centered focus and award-winning journalism.