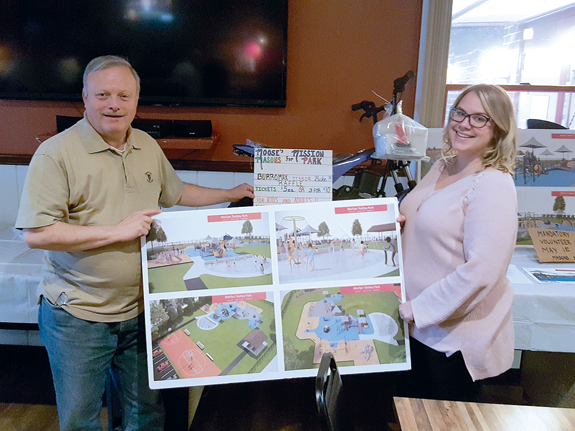 Village of Lewiston Trustee and Moose Lodge officer Vic Eydt is shown with Stephanie Myers, village deputy treasurer and a Moose Lodge staffer. They're holding an artist's renderings of the Mason's Mission Playground at Marilyn Toohey Park. Readers are invited to be a part of the Aug. 3 "Moose's Mission" benefit at Academy Park. (Photo by Terry Duffy)

Excitement – and plenty of support – continues to build throughout the River Region for Mason’s Mission Playground at Marilyn Toohey Park, an all-inclusive playground project for children, envisioned for the Red Brick Municipal Building’s backyard in the Village of Lewiston.

Come Saturday, Aug. 3, Lower Niagara Moose Lodge No. 584 will hold a “Moose’s Mission” benefit at Academy Park to help turn this exciting playground concept to reality. Starting at 2 p.m. and continuing to 11 p.m., the all-ages event will offer a variety of food vendors and activities on the Academy Park grounds.

Organizers Vic Eydt, a Moose Lodge board member who also serves on the Village Board of Trustees, and Moose bar staffer Ashley Olds, said the day will include a variety of entertainment on the DiMino’s bandshell stage.

Featured will be the sounds of rockers Wasted Whiskey, the Dave Thurman Band, Rick Zachary, Sway, and The Summer of ’69 band, plus Rodney Dangerfield impersonator Marc Melzer. There will be plenty of activities for the kids, including a bounce house, a dunk tank and face-painting.

“Our event has a pretty great lineup!” Olds said. “And we aren’t even done yet. Get excited – this is an amazing cause!”

And for the adults, look for a beer tent plus a Monte Carlo tent with black jack, a money wheel, dice games and fun activities galore. Also offered will be an assortment of raffle items and 50/50s.

Olds and Eydt said they are now looking for volunteers in the community to assist and be a part of the “Moose’s Mission” event. An organizational meeting for all interested residents will be held at 6 p.m. Wednesday, May 1, at the Moose Lodge, 112 S. Water St.

All are invited to participate in the special happening; one need not be a Moose member to join in the fun.

“Your support of this special event will help us raise the funds needed to make the Mason’s Mission Playground a success and allow all kids to enjoy the freedom and fun of childhood,” Eydt said.

Introduced last year by Village of Lewiston Mayor Anne Welch and the Board of Trustees, the roughly $700,000 playground is patterned after a similar successful project in Pendleton. It calls for a nearly 14,000-foot playground area that will have its focus on special needs children while providing a variety of enhanced play and safety measures for children. Among the many features in planning are all-new sensory areas for children with special needs and their parents, all in a shaded, secure environment. Think creative musical instruments; new “buddy swings, We-saw seesaws and wheelchair-accessible slides; a seated zip line; a splash pad; plus open green spaces to allow for interaction with parents family and friends.

The project won the backing of the Town of Lewiston, which submitted an application to the Niagara River Greenway Commission and was awarded $200,000 in funding by the Host Communities Standing Committee. The playground also won support from general site contractor Mark Cerrone Inc. of Niagara Falls, which pledged labor and assistance on acquiring materials with the village.

Community organizations in the Niagara Region are stepping up to the plate to assist this venture with fundraisers and offerings of volunteer labor and materials for Mason’s Mission to become a reality by this summer.

Recently, the Mason’s Mission Foundation held its first fundraiser of 2019, “Bowling For Play,” at Brad Angelo Lanes In Lockport. Organizers, including Lewiston committee members Ed and Vicki DeVantier, said part of the funds would to go support the Mason’s Mission playground in Lewiston.

St. Paul’s Episcopal Church will hold a Mother’s Day luncheon and dessert auction benefit on Saturday, May 4, at 400 Ridge St., Lewiston. All proceeds event will benefit the Mason’s Mission Foundation.