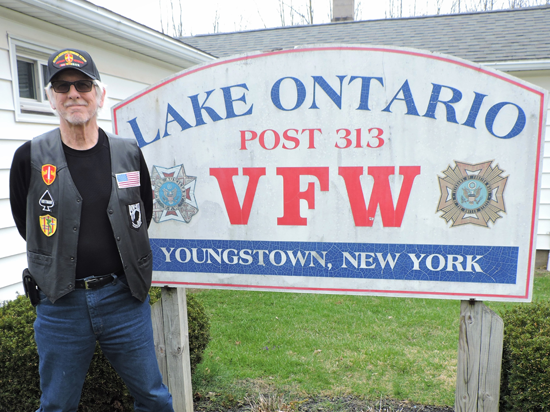 The event begins with a cocktail hour followed by a sit-down dinner and program. The chamber board of directors will then present awards to Business of the Year and Citizen of the Year honorees from the Lewiston, Youngstown, Ransomville and Sanborn communities. In addition, a silent and basket auction will take place.

Gary devotes his time and energy into helping other veterans, raising the profile of the VFW Lake Ontario Post 313, and keeping the history of the Town of Porter alive as deputy historian.

Gary is a Vietnam veteran and became involved in the VFW in 2003. At that time, most of the active members of the post were World War II and Korean War-era veterans. Up until then, Gary didn’t really dwell on the fact that he was a veteran. He had spent 12 years in the Army – three on active duty, including a tour in Vietnam, a stateside assignment as a special agent in Army counterintelligence and six years active Army Reserve, plus three years with the California Army National Guard.

Most people here had not known Gary was a veteran. Ralph Borelli, another Vietnam veteran, happened to be doing electrical work for Gary and encouraged him to join. Since joining, Gary has served in several leadership roles as quartermaster, adjutant, senior vice commander and post commander from 2014-18. In 2018, Gary received his 15-year VFW service pin, serving in leadership roles.

Gary helped raise the profile of the post in the community by participating in local events and offering to help veterans with much-needed services. One of the goals was to attract new membership to the post, including Vietnam vets, and those who served in the Iraq and Afghanistan wars. The post has been involved in the Labor Day parade, Field Days, the Welcome to Summer Street Dance, Strawberry Festival, Christmas in the Village, the Youngstown Community Picnic and more. Gary along with his wife, Lynn Jacobs Zanardi, are strong supporters of veterans, helping with fundraising, programming and camaraderie.

Home is where the wife is, according to Gary. His wife, Lynn, serves as the town historian, with Gary serving as deputy historian. They are a team in every aspect, from volunteering to help veterans to preserving the rich history of the town.

Since 2017, they have worked to preserve history, conducting research and recording important events for the town. In their spare time, they enjoy writing together – on everything from novels to screenplays. Together, they wrote a six-episode, 12-hour miniseries titled “Soldiers,” and are actively looking for an agent to help promote it.

Gary was born and raised in Napa, California, and has been a Town of Porter resident since 1998. This region reminds him of Napa Valley when he was a child – farms, ranches, a few wineries, good music (Gary had played drums and guitar in a rock band), and the people. He earned a B.A. and M.A. in history from San Jose State University (1974) and Cal State University Sonoma (1976), and studied screenwriting and film production at the graduate level at Cal State Northridge and UCLA. Gary spent 18 years in Los Angeles working as a private investigator.

Gary and his wife continue to work every day to help veterans get the support they need, whether it is financial, emotional or physical. Working together has been their key to success. Gary and Lynn, together, raised his son Zack, now 34, who is a teacher in Texas, and her daughter, Bridget Laughlin, now 28, who has an MBA and lives with her husband, Jeff, in the Midwest. They proudly raised their children in faith, family, patriotism and community service.

The Niagara River Region Chamber of Commerce, the Town of Porter supervisor and council members are proud to honor Gary Zanardi, the 2019 Town of Porter Citizen of the Year.