Village of Lewiston trustees will meet at 5:30 p.m. Monday for a special meeting, at which time they are expected to adopt the 2019-20 fiscal year budget.

The tentative tax rate is $7.57 per $1,000 of assessed valuation, which is a 19-cent increase. This adjustment falls within New York state’s 2% tax cap, and will yield almost $30,000 in additional revenue.

Even with the tax rate increase, trustees expect they’ll need to take $285,260 in appropriated funds to balance the $3.72 million budget.

Mayor Anne Welch said raising taxes is a necessity with the new budget.

“Everything is going up. Your gas, your electric. So, you have to allow for that. If you just keep saying, ‘Oh, we’ll stay where we’re at, and we’ll just keep taking out of the fund balance,’ well, you can only go to the well so many times without replenishing it,” she said at a work session earlier this week

Welch added, “Hopefully, we don’t have to spend so much (in the future). But if you don’t raise taxes to meet the growing cost of living, you’re just digging yourself a deeper hole.

This budget is up $128,927, or 3.6%. As in past years, the village’s biggest expenses are essential services, including:

Additional monies also have been allocated for the Department of Public Works to provide for vehicle repair work and an extra part-time worker, as well as for the Recreation Department’s year-round programming – something the board wholeheartedly endorsed.

Though it’s not a big factor in the overall budget, employee pay also is going up.

Welch said, “We’ve got to take care of our employees. You’re only as good as your employees. These guys, they work hard; they do every kind of job that there is. There isn’t one guy who does one job and one guy that does another job. They all do different jobs, and they work hard. You have to recognize that and give them a cost-of-living raise, so they can make ends meet, too. They’re not going to get rich here.”

But as far as overall spending within the departments, “You can’t cut it any more than we have,” Welch said. She described the next year’s fiscal plan as a “bare-bones budget.”

Clerk/Treasurer Amy Salada said, “But I do think – like you’re saying, Nick – it would a good idea maybe to have a little work session where you all kind of come up with some ideas on raising (funds).”

“Here’s the thing, too, guys, we are one square mile,” she noted. “We don’t have any room for expansion. We don’t a get a big, new subdivision to (boost) the tax base. We’ve been lucky to get (the plaza at) Eighth and Center – more tax base coming. The new Fairchild – more tax base. River’s Edge (on North First Street). These are all adding tax base to us, but our property – we’re saturated. There is no room to expand. One square mile – that’s all we have; so, we have to do the best we can in one square mile. … We’ve got to be creative.”

On the revenue side, more money is expected from the sales tax, Lewiston Landing, building permit and mortgage tax categories. Trustees also have invested in treasury bills over the past eight months, netting an extra $9,000 to date. Overall, the Village Board expects to raise $3.4 million in the next 12 months.

The budget has to be approved by April 30. June 1 marks the beginning of the next fiscal year.

In addition to the tax rate increase, the sewer rate is set to go up 5 cents per 100 cubic feet of usage, from $4.69 to $4.74. This adjustment is mandated as part of what is required from the village per its tri-community wastewater treatment plant partnership.

A public hearing on this increase will take place at 6 p.m. Monday, May 6, ahead of the board’s work session. The meetings will be held inside the Morgan Lewis Village Boardroom at the Red Brick Municipal Building, 145 N. Fourth St.

Residents can expect to see the sewer bill price change in the July 1 bill. 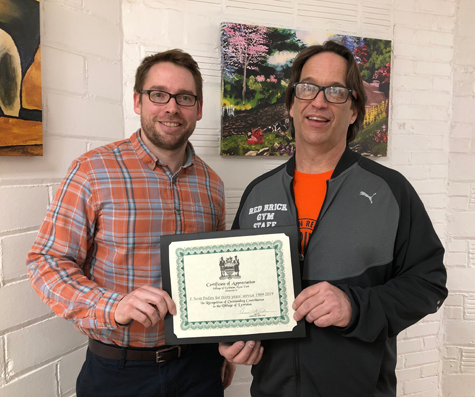 During Monday’s regular monthly board meeting, Recreation Department leader Scott Pedley was presented with a certificate of appreciation for 30 years of service to the village.

Recreation Director Brendan McDermott said, “Scott has impacted the lives of thousands of youth – and I don’t use that word lightly.”

He added, “Scott has a big heart; he does not like this kind of recognition; he looks out for the underdogs that come into the recreation center and he keeps a watchful eye over those children. He’s done countless art classes for children and adults alike. He built the weight room and fitness center, really got that off the ground in the ’90s – and it continues to be well-used even currently. In addition, Scott’s coached floor hockey for us, basketball – pretty much every sport under the sun.” 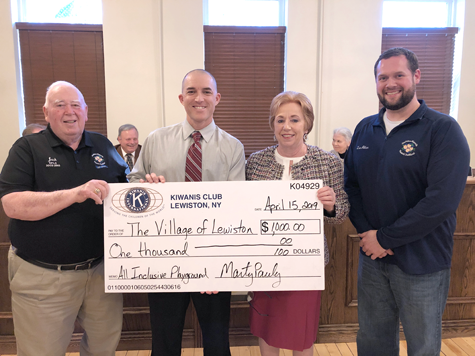 The Lewiston Kiwanis Club presented Mayor Anne Welch and the Village of Lewiston Board with a check for $1,000 toward the all-inclusive Mason’s Mission Playground at Marilyn Toohey Park. Kiwanians Jack Hanrahan and Lee Allan (outside) joined President Marty Pauly in presenting the check.

The Lewiston Kiwanis Club presented Welch and the Village Board with a check for $1,000 toward the all-inclusive Mason’s Mission Playground at Marilyn Toohey Park. President Marty Pauly said the funds were raised as part of the 2018 Niagara County Peach Festival.

“That’s awesome!” Welch said. “Thank you very much; we appreciate it.”

Kiwanians Jack Hanrahan and Lee Allan also were on hand to present the check. (See photo on Page 3.)

“That will go a long way with our playground,” Welch said. She noted, “Kiwanis does a great job all year-round with their charities.”

In addition, former Deputy Treasurer Ed Walker informed the board of a Mason’s Mission fundraiser at St. Paul’s Episcopal Church, “right across the street” from the Red Brick.

“They’ll be having their second annual Mother’s Day dessert auction and basket raffle on Saturday, May 4, from noon to 3. All of the proceeds from that event will be benefitting Mason’s Mission Foundation, the funds going directly to support the playground that’s going in here this summer,” he said. “We’re delighted to do it. If you have not come (in the past), we have an awful lot of fun with it. We’re hoping to raise a fair amount of money.”

Welch thanked Walker and said, “I can’t say enough about the people who have donated and are fundraising. I’m thrilled that people are really, really donating.”

Walker will serve as auctioneer at the fundraiser.