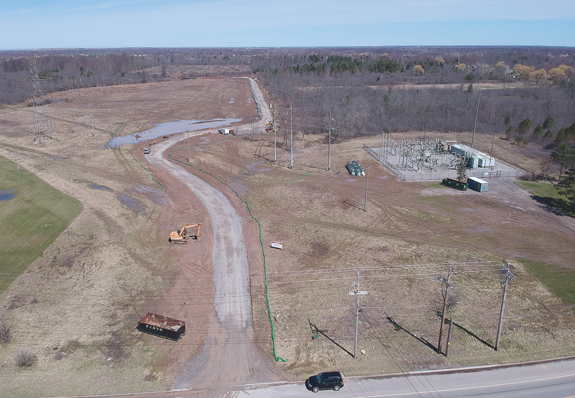 A bird's-eye view of the new solar farm under construction by Montante Solar at Whitehaven and Stony Point roads. (Contributed photo)

As Island residents are now fully aware, Grand Island is moving full-steam ahead when it comes to solar energy.

The town has had its own unified solar permit on the books for nearly three years now. The law covers what is known as net meter home installations on residences and remote net metering on solar farms. Net metering refers to a property owner deriving the spin-off financial benefit of partnering with a power generator located off the property, while remote net metering on solar farms involves direct financial benefits paid to the property owner from the sale the site-generated solar power to an electrical provider such as National Grid.

Roughly 50 net meter homes are now connected and the town is now moving further on the concept of the remote net meter solar farms, with one active project on Bedell Road, another under consideration nearby, and a new project taking off on Whitehaven Road near the east river.

The purpose of embracing solar for the Island boils down to obtaining greater connectivity and embracing the benefits, said Deputy Supervisor James R. Sharpe.

“I’m looking at all aspects of the community” when it comes to solar, Sharpe said. “I look at how it can be sustainable; how is development going to be applied to Grand Island; where’s your residential; where’s your commercial?” on how to capitalize on this benefit.

Drawing a comparison to the state’s earlier push for greater broadband availability in all areas to meet the needs of a community, Sharpe said that, for solar as with broadband, “luxury has become a necessity.”

Sharpe said that, in its planning for these, the town considered such factors as availability, cost and benefit to the community. It has to be available and at a reasonable cost; and for the governmental entity, be it Buffalo, Grand Island, Lewiston or Wheatfield, for example, it needs to be practical as to the cost of even considering such a venture.

In other words, it has to be worthwhile for a community to take it on.

Sharpe said Gov. Andrew Cuomo, a big proponent on expanding broadband availability throughout the state, has been taking a similar approach when it comes to promoting solar as a green energy benefit.

“He made an objective that he was going to have so much solar produced in the state of New York by 2020 or 2030,” Sharpe said.

That offering – the state’s push on solar as a cost-effective energy resource -- prompted communities, such as the Island, to take an expanded look. Sharpe said he began discussions with the New York Energy Research and Development Authority and discovered how the Island can, indeed, be an attractive location for solar generation.

“They (NYSERDA) went into the fact that you have an ideal environment, you have space, you have two substations, both of which have capacity, which means that they’re built to hold so much power generation and transfer,” Sharpe said.

Following those discussions, Sharpe said the town began to consider how realizing this benefit could be accomplished. A solar law was researched, developed, debated and ultimately adopted.

Next came the issue of capacity, what areas of the town could be considered for development on a cost-effective basis for solar energy generation, and what couldn’t. Sharpe said the town learned through NYSERDA that its two substations could accommodate 20 megawatts of generated power following individual upgrades by the town of roughly $300,000-$500,000 each. He said when considering such issues as the ownership/leasing of land for building of the larger net metering solar farms, the Island also learned it would be eligible for financial benefits, in the form of offering tax abatements for properties that became solar generators.

“If you are a community that agrees to the tax abatement or tax credit program for energy, then you could apply and get a 15-year abatement on a property,” Sharpe said. “You’re getting the taxes of that property as it exists; and they have an abatement of not being charged for the modifications or the upgrade of the property.”

He added, “In this case, you (the individual property owner) improve the property. The base what you’re getting so far right now is going to stay constant, so as (the municipality) raise(s) your land taxes, your special district taxes, you’re going to continue to get those at that base.”

Any improvements to the property (in this case a solar farm) would become eligible for a state credit, or a PILOT – payment in lieu of taxes. The PILOT would be based on the generator of power and its cost.

He said the town considered the PILOT availability as it considered areas that could be planned for solar. Sharpe said recreational properties – town parks, for example – were ruled out. Others such as non-sewered areas – areas not considered developable – would be viewed as attractive, while sewered, developable sites were not.

“In a non-sewered district, it’s wide open; it’s not requiring any infrastructure at all. And therefore not taking away from any developable property that has the potential of being developed,” Sharpe said.

As a result, the choices for the town became one in a non-sewered area – Active Solar, a nine-acre parcel located on industrial lands on Bedell Road, generating 2 megawatts, with another being considered. The other choice was the project at Whitehaven and Stony Point roads, a 42-acre, 20,000-panel remote net metering solar farm expected to generate 7 megawatts. It’s being developed in part by Montante Solar. On this, Sharpe said the town considered such issues as location, the access to transmission lines, and impact/desirability to others.

Located in an area under existing right-of-way power transmission lines, Sharpe said the area was considered non-developable and thus a good one for a solar farm.

Discussing the benefits of net metering that comes with a solar farm, Sharpe said, with the tax abatement package, “there is a long-term investment by investors to build that solar park, build the capacity that governments are trying to get done.

“It’s really a governmental thing that’s trying to offset fossil fuels, by bringing in an alternative source of energy. It’s a form of government (in this case, New York state) coming in and helping out a community.”

Sharpe said the new remote net metering farm on Whitehaven, once complete, would have the capacity to generate enough power to serve the needs of 700 to 1,000 residents.

But while attractive to some, the Whitehaven project has and still continues to see opposition, particularly from neighboring residents who view such an endeavor as invasive and are fearful that it will bring down property values. Sharpe called that reaction part of the process that comes with development.

“Every time you have a subdivision going in, you have the same push, the same arguments. If you’re going to do something different, everyone is going to have a comment, have a discussion,” he said.

Of the Whitehaven site, he said it’s located in an area adjacent to high-tension power lines that will never get built on. “The landowner owns the property; they have been owning it their entire life, and they can’t sell it. And they can’t use the property,” Sharpe said.

Defending the solar farm in the face of the opposition, Sharpe commented, “This park is kind of that balancing act from the governmental side. The property owner has a right to his property, (but) is it reasonable, applicable?

“If you have a law (the town’s unified solar permit) that allows you to look at it, you have to balance the two (here).”

He said the town continues to work with Montante Solar to minimize its impact, “so that it’s not as intrusive and invasive into your luxury and comfort of your home.”

Among the issues town looked at with the property owner/developer and since modified are the substation, now located 500 feet off the road; working with the state Department of Environmental Conservation and Army Corps on such areas on lands and water sources; fencing, tree placement and the installation of flowering bushes and vegetation to provide a buffer and the promotion of bee farming/pollination programs; road siting and the planning for future residences to be located at acceptable distances from the solar farm.

Of the opposition, Sharpe said, “We did dot the Is and cross the Ts (on this solar farm). I won’t do anything where it turns out I didn’t see and get blindsided.”

Sharpe said the owner is doing things he sees as “pioneering what the (town’s) solar law could bring in the future. I feel good on this; it has tremendous benefit.”