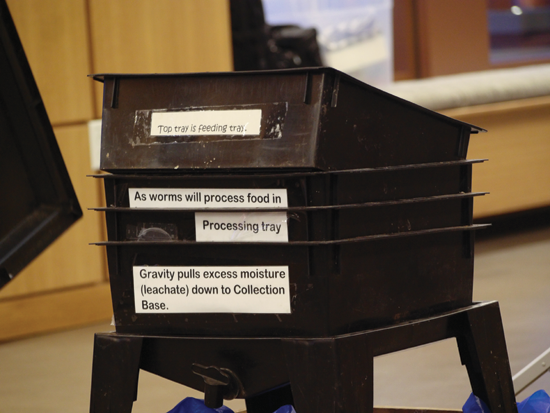 Niagara County master gardener and 4H educator Bonnie Benton told a composting class at the Western New York Welcome Center that vermiculture is a smaller scale method of creating compost that can be done indoors. It is helpful for people who live in apartments or who do not have yards. Vermiculture is done in stackable trays that can be kept in heated garages, basements, home offices or living rooms.

People who compost are able to improve the health of their gardens, as well as reduce the amount of waste that they leave for the garbage truck each week, said master gardener Bonnie Benton. Benton spoke to a full house at a presentation organized by the Grand Island Farmers Market and sponsored by the town’s Conservation Advisory Board on March 28 at the WNY Welcome Center.

“Home composting isn’t difficult,” said Benton, who works with the Niagara County 4H Club as an educator teaching both adults and children on gardening, nature projects and composting. “It’s just knowing the do’s and don’ts. What we want to do is to reduce and recycle. Our landfills consist of 40 to 50 percent food waste at this time. That food waste could be composted and returned to the soil. Compost is a great fertilizer for plants. It is a natural environmental fertilizer.”

Compost is often described as the “end product,” but Benton said that she does not see composting in such a linear way. “Composting is a cycle,” Benton said. The start is putting food and yard waste in a bin. The decomposers eat the waste, which turns the waste products into compost. The compost is applied to plants, and a new cycle starts. “So I hate to say that the compost is an end product because it really is just part of the cycle.”

Benton explained that there are a variety of types of bins that can be used for composting. She said that a bin that is 3 feet by 3 feet in size is the ideal type of bin, but that different types of bins can be used depending on the size of the yard. She explained that the things to be put into bins must include things that are mainly carbon and substances that are mainly nitrogen. Things that are rich in carbon are described as “browns.” Among the browns that are good to put in the compost bin would be shredded maple leaves, straw, and sawdust. Things that are rich in nitrogen include vegetable and fruit waste, eggshells, coffee grounds, and garden waste.

Having various organisms, which serve as decomposers, is also an important part of the composting process, Benton explained. She identified some of the organisms as ants, worms, centipedes and millipedes. “And that’s good. They are going to help reduce your food waste and your yard waste down to something that can be used. So we want to make sure that we’re keeping them happy. You want to make sure that you have the right balance. Composting is a balance of water, oxygen, carbon and nitrogen,” Benton said. She described the composting process as “part of the natural cycle and environmentally sound.”

The balance of browns and greens should be two part browns and one part greens. She said that, if the compost bin has too much nitrogen, “You could end up with a really stinky, slimy mess in your compost bin.” If there is too much carbon, the compost bin will be dry and “you won’t have anything living in there.” If there are not enough organisms in the compost bin, it will take a long time for the waste products to break down.

There are waste products that should not be placed in a compost bin, Benton said. These include meat and dairy products (because they attracts animals) and bread (because that will mold before it decomposes). In addition, Benton said that she doesn’t recommend putting oak leaves in the compost bin because they tend to be leathery. They could sit in the bin for a few years without breaking down. She said that maple leaves are a better choice. But, she cautioned, people should check the leaves before putting them in the compost bin. Some maple leaves develop dark spots in the fall. These are known as tar spots. Because tar spots are spores, leaves that show signs of having them should not go into the compost bin. Any leaves should be shredded before being placed in the compost bin. One way to shred leaves would be to run over them with a mulching lawnmower.

Things to be careful about putting in the compost bin would include weeds, animal manure, and grass because of the risk of producing a mulch rich in weed seed. “Unless your bin is hot enough to really neutralize those weed seeds, I’d keep them out of there,” Benton said. She added that people should be careful about putting the peels of citrus fruits in the compost bin because there is an oil in the citrus, called limonene, that is toxic to worms.

Another thing to be careful of is using the grass clippings from neighbors or of traveling around the area and collecting old bagged leaves, Benton said, adding that, if a yard has been treated with pesticides and herbicides, the waste products from that yard should not be placed in a compost bin, especially if the compost is going to be used on a vegetable garden.

The key to successful composting, Benton said, is stirring and turning the compost bin on a regular basis. Benton suggests weekly. Stirring the compost bin means that some types of waste, such as grass and leaves, which tend to mat down and get stuck together, are moved around. The easiest tool to use for turning the compost would be a pitchfork. Turning adds oxygen to the compost bin, which Benton said is an important part of the composting process. A technique for composting that Benton suggested is called the lasagna method. It is put together in layers, like a lasagna. It includes brown layers, which are made of straw, dried leaves, saw dust, and torn-up paper. “You can build the sides up with your carbon material. The well in the middle will be the nitrogen, which is made up of plant waste, which would be fruit and vegetable waste. As you’ve done that, add more carbon and more nitrogen so that you’re actually doing that like a lasagna.”

Currently, Erie County is holding a sale of compost bins and rain barrels. They are being sold at wholesale prices, and the deadline for ordering them is May 3. Pickup times will be 4:30-7:30 p.m., May 15 and 16, and 9 a.m. to noon, May 18, at either the City of Buffalo Engineering Garage, 1120 Seneca St., or the Town of Wheatfield Town Hall, 2800 Church Road. When you order, specify the location and the time and date for pickup. For more information about ordering, call the Erie County Department of Environment and Planning at 716-858-6370 or email [email protected].