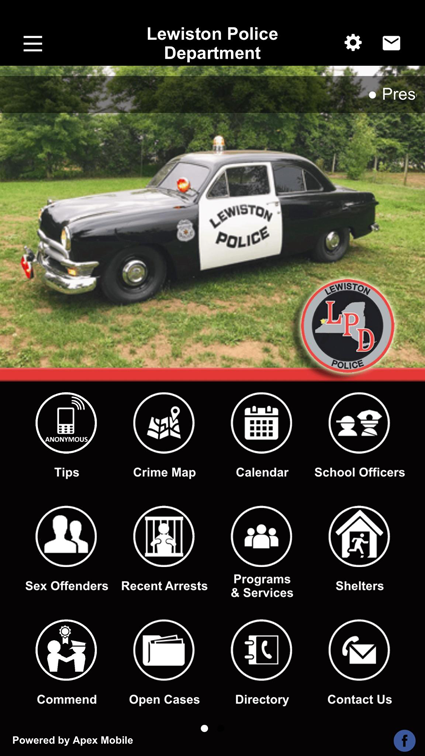 The Lewiston Police Department is considering a new cellphone app to allow for greater communication between the department and the community. (LPD photo)

Environmental studies at the “Lower River Road Town Park” on Lewiston’s waterfront, and discussions on a new Lewiston Police Department cellphone app were among the newsmakers at the Lewiston Town Board’s March 25 session.

Town Engineer Robert Lannon of GHD Consulting told board members that additional samplings and analysis of two lagoons on the 5.7-acre riverfront parcel are now underway, and he sought board approvals to continue for more.

The work follows an earlier call by Town Board members, the Lewiston Environmental Commission and Lewiston resident Amy Witryol for a far-greater review of the town property, located just north of the Stella Niagara Preserve and owned by the Western New York Land Conservancy.

Lannon said the latest testing involved two borings, with six additional borings still to come. He said borings Nos. 13 and 14 have been completed in an area between the west lagoon and the river. Still to come are borings 15 and 16 in the west lagoon, and 17 and 18 in the east lagoon.

“Those are where the six additional sampling locations are proposed,” Lannon said. He explained that, once complete, the town would have additional information with respect to “the depths of the samples to be taken and analyzed, and … what to analyze for.”

Lannon said GHD Consulting, contracted by the town to perform the analysis of the riverfront property, enlisted Trec Environmental of Spencerport to conduct the curing boring and analytical results. Testamerica Laboratory in Amherst is conducting the test analysis work.

He said environmental scientists would be on site “collecting samples, with testing by Trec Environmental. Those samples would then be transmitted to Testamerica for analytical bore (testing).”

“We would take the data, analyze it, and amend/update the site characterization,” Lannon said.

At the session, Councilman Al Bax noted concerns raised earlier by the Lewiston Environmental Commission with respect to composite testings. Lannon responded, “What we propose here (are) two locations, with two depths within each location.”

Discussing the samplings, he said that one performed at 0-2 feet, referred to as the contact zone, involved “the shallowest or top 2 feet.”

As to sampling at individual levels, Lannon said, “What we propose, which has also been consistent with what we’ve done to date, is one at the surface, and a composite at depth … not a discrete sample, but a composite sample.

“It’s intended to give a representative indication of what’s there.”

As to the testing being done, Lannon described it as being “site-specific.”

Commenting on work at the site thus far, Supervisor Steve Broderick said, “The board has never wavered on the testing by GHD. It was not that the report is bothersome, it was that we wanted some more testing. So, we’re going to (do) more testing. Bob has laid a plan for that testing; I feel comfortable with the testing.”

On a motion for GHD to proceed with still more testing, the board concurred.

The second involved GHD’s role on the project itself.

“(The commission said) it was just good practice to have the firm that would characterize the property be different from the firm (GHD) that would stand to financially benefit … in this case, upwards to $100,000, from the development of the park,” Witryol said.

“If your objective is to fully characterize the burial, then you need a sampling and analysis plan to vote on, from a qualified engineering firm, that clearly states, ‘The purpose of this sampling plan is to fully characterize the burial,’ ” she added. “The report … handed out (earlier) doesn’t even have a purpose section, doesn’t have an objective section, which is very standard in any sampling and analysis plan. And no, the DEC did not look at that sampling plan before it was conducted. That plan that was given to this board, doesn’t even mention the 1978 Kreihbeil report.”

Witryol said GHD environmental scientist Kathy Galente, who spoke at the Town Board’s March 11 work session, did not explain that “only the first round was sampling for all analytes, and that VOCs, and semi-VOCs and elevated mercury were found, even in the composite sampling.

“Given the kind of backwards approach to this process, and the rush to put this through, without even showing the sampling plan to the Environmental Committee, or without showing it to the public before you vote on it, doesn’t necessarily mean it’s a bad plan, it just smacks of a cover-up,” she said. “What I would encourage the board to undertake is … if you really want to characterize that burial, you need a proposal ... that says very specifically that’s what you want to accomplish from this report. I would strongly recommend that, before GHD goes out and conducts the sampling, you get a more formal proposal. … Make sure that what you accomplish is articulated in writing.

“(Otherwise) we’re just going to go around and around in circles and only increase the angst in this town, because all these votes seem to take place before the public has an opportunity to even look at the plans … or that our Environmental Commission looked at them in a very transparent way.”

“One of the concerns I’ve had is communication with our residents,” he said, and recalled recent problems with reverse 911 not being able to contact the community in times of emergency – whether it be weather-related, closures, etc. “On the police side, we’ve had barricaded subjects, where we’ve had to keep people out, or some other form of pressing issue.”

Noting the recent discussions LPD has had with various law enforcement cellular app providers – the latest being Apexmobile of Foothill Ranch, California – Previte said such an offering would be a great addition for LPD as well as the town.

He described different options that LPD could incorporate, such as sex offender lists, information about the department, contacts, etc. “Probably the most beneficial part of it is there’s a push notification option.”

Previte likened it to a weather alert.

“We would have the opportunity to be able to do that as a police department, and as a town,” he said.

Previte said the app could be applicable for any department in the town, such as Town Hall, or for weather announcements, when water bills are due, and the like.

Previte said that, should LPD elect to utilize this offering, his would be the first municipal police department in New York state to offer such an app.

He said he intends to discuss the new Apexmobile package further with Town Board members at the April 8 work session. Should the LPD app meet board approval, Previte said it could be in operation by this summer.