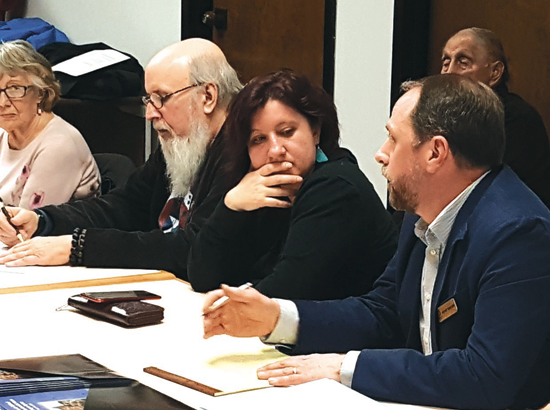 US Army Corps finalizes record of decision for NFSS cleanup

“This is a very important meeting that we’re having tonight,” Lake Ontario Ordnance Works Restoration Advisory Board Chairman Bill Choboy prefaced Tuesday on the Lewiston-Porter campus.

With that, it was announced the U.S. Army Corps headquarters officials in Washington, D.C., following years of delays, officially signed off on its Alternative 4 record of decision for remediation of the Interim Waste Containment Structure operating plant at the Niagara Falls Storage Site on Pletcher Road. A 10-acre cell constructed in the mid-1980s, the IWCS houses high-level K-65 radioactive wastes dating from World War II-era uranium processing, plus lower-level R-10, L-30, L-50 and F-32 residues. All were associated with the U.S. government’s Manhattan Project leading to the development of the atomic bombs dropped over Japan that ended the war.

IWCS exists today as a highly secure, Corps-monitored and maintained facility at the NFSS.

However, for decades, the community has sought for a more-thorough government response from the Army Corps – namely a remediation plan, toward excavation and removal of IWCS contaminants.

A $490 million remediation project, Alternative 4 was announced with much fanfare by the Army Corps in December 2015 following years of detailed corps and community reviews (Sentinel, Dec. 12, 2015; www.wnypapers.com).

Intended to fully remediate the IWCS, it calls for, “excavation, partial treatment, and off-site disposal of the entire contents of the IWCS,” according to the Army Corps 2015 announcement. “After evaluating the alternatives in the feasibility study pursuant to the criteria described in the National Oil and Hazardous Substances Pollution Contingency Plan (NCP), the Corps of Engineers considers Alternative 4 to provide the best overall protection of human health and the environment.”

However, from that time frame, the anticipated Army Corps action to finalize on Alternative 4 seemingly went nowhere as the ROD languished at its D.C. headquarters while the transition of administrations from President Barack Obama to President Donald Trump and the associated governmental leadership changes commenced.

“We thought that the ROD would be (signed off) and published by the corps in 2017, but that still hasn’t happened, even though the plan was supported by every involved state and federal agency,” Choboy said last week (see “Corps Plans” at www.wnypapers.com).

Following the latest demands on Army Corps officials to finalize the Alternative 4 ROD, action began to happen. It started with calls by the LOOW RAB group, followed by a resolution passed March 19 by the Niagara County Legislature, a similar measure approved by the Lewiston Town Board and a direct March 22 letter by 27th District U.S. Rep Chris Collins to Rickey James, Army Corps assistant secretary of the Army for Civil Works, calling for an official sign-off on the ROD.

In his letter, Collins wrote, “I am writing you … to express urgent concern regarding the record of decision for removal of the interim waste containment structure.”

He explained, “The removal of radioactive material from the Niagara Falls Storage Site is crucial to the residents of my district. The Niagara Falls Storage Site is a 131-acre federal property that has held 2,000 curies of radium 226 and other radioactive material since World War II. The current proposed plan to remove radioactive material under the Formerly Utilized Sites Remedial Action Program (FUSRAP) has the full support of the US Environmental Protection Agency, the NYS Department of Health, the Niagara County Legislature, as well as many other stakeholders. If the ROD is not signed and returned to USACE, then the site cleanup would not be able to move forward.”

“I respectfully ask that the ROD be signed and returned to the USACE,” Collins wrote.

On Tuesday, the Army Corps announced the breakthrough.

“The U.S. Army Corps of Engineers Buffalo District is pleased to announce the record of decision for the Interim Waste Containment Structure Operable Unit of the Niagara Falls Storage Site, located in Lewiston, New York, has been signed by Mr. Rickey ‘R.D.’ James, assistant secretary for the Army for Civil Works,” the Army Corps announced. “The selected remedy is Alternative 4 from the proposed plan: excavation, partial treatment, and off-site disposal of the entire contents of the Interim Waste Containment Structure.

“ ‘The selected remedy provides the best overall protection of human health and the environment,’ said Buffalo District Cmdr. Lt. Col. Jason A. Toth. ‘It is responsive to the feedback and input received from the community and stakeholders over the years.’ ”

“A final record of decision has been signed to finally change the status of the Niagara Falls Storage Site from a temporary storage area to someday a former storage area,” Witryol said. “It’s no longer a question of if the material is going to be removed from our community, it’s only a question of when.”

Witryol said that, for the past three years, LOOW RAB officials have been actively communicating with the Army Corps on the need to finalize the ROD. It was a process that intensified over past weeks.

“Between the time the budget came out 12 days ago, and late yesterday, when the record of decision was signed, it was quite an amazing confluence of events and help from stakeholders all over this community,” Witryol said. “The Army Corps of Engineers did a fantastic job” in helping make this record of decision happen.

“It’s a great news story; we’ve been working all these years to get to this point,” Kowaleski said this week. “It was a little (hectic) in the last few days getting there, but, hey, the assistant secretary signed this thing. … We all know what needs to happen.”

Now the question is “when.”

“I cannot answer and give you a date,” Kowaleski said. “ ‘When’ means when Congress appropriates the funds and for us to get going on the work. We don’t control that. We execute our order on the mission as it’s funded. …

“I want to be truthful with you; it’s when Congress appropriates the funds and we get going on the work. I don’t control that.”

Kowaleski told the group there are number of steps the Army Corps must undertake as work begins. “Before Congress is ready, before the corps is ready. We are not ready to start digging tomorrow, or next year. We will need some time to get ready for that.”

Kowaleski said that, by means of the finalized ROD, the IWCS would now be placed on a list of roughly 12 FUSRAP projects nationwide that utilize the Army Corps annual appropriations from Congress.

Kowaleski explained the Army Corps works on a one-year time frame per its congressional funding and, with that, there are a number of procedural steps it follows toward starting and competing a remediation project.

He forecasted a time frame of five years before the Army Corps would actually begin the IWCS Alternative 4 cleanup, and up to eight years to complete it. Included would be up to two years on design and planning for the project; one year to address associated infrastructure and work on the IWCS subunits B and C toward accessing subunit A; two years to address/complete subunit A retrieval/stabilization/removal work; two years to address subunit B excavation/disposal; one year to address subunit B excavation/disposal; followed by one-year plus work on facility D&D and site restoration.

Kowaleski said FUSRAP funding, which the corps would derive from to complete the IWCS project, typically gets roughly $120 million annually.

“There’s 23 active sites; there’s 12 sites right now that are under remediation or they got a record of decision to get started. Essentially this site is No. 13 on that list,” he said.

Explaining the delay, Kowaleski said that, when considering the $120 million FUSRAP national budget, the $490 million IWCA Alternative 4 work, alone, would eat up five years of FUSRAP’s national allocation. He said the Army Corps is trying to balance its FUSRAP funding to address the aforementioned 23 active sites and now 13 remediation sites. “When we look to the future (and considering the other sites), that’s what’s waiting ahead of you in line.”

Noting a startup time frame of anywhere from the years 2022-25, Kowaleski stressed the community needs to remain patient during this process. He also stressed the IWCS, in its current state, is completely safe, is continuously monitored and maintained by the corps, and will remain that way for well into the foreseeable future.

Kowaleski also said there is preliminary work that needs to be addressed at NFSS before this even happens.

“Now that we’ve cleared the major mega-hurdle of getting this ROD signed, there are two more RODs coming (at NFSS),” he said.

Included would be the balance of plant – other soils, buildings on the site, outside the IWCS cell – and groundwater concerns. Both would see a similar review/planning process to Alternative 4, but would move along within the Army Corps at lower/expedited level.

Explaining the Army Corps has to work within its budgets and also consider the vast nature of the work that Alternative 4 entails, Kowaleski said, “The term is ‘incremental funding.’ Let’s just say that we mapped out a process that’s eight years. So that’s $60 million per year. That’s what we’re going to need is a continuous flow of $50-$60 million per year, every year from start to finish.

“We cannot open the cell, and stop work, put our shovels down and come back two years later, because there was a break in the funding. This site is very special; when we open it, we got to get through it and button it up. So, we have got to have that uninterrupted funding flow of about $50-$60 million a year, which is like half the national program.”

“So that’s why I can’t pin down a date for you tonight,” he said.

Nonetheless, the Army Corps announcement is welcome news, Witryol commented, speaking for the RAB: “The RAB wishes to thank Mr. Rickey ‘R.D.’ James, assistant secretary for the Army for Civil Works, for signing the record of decision for the Niagara Falls Storage Site. The decision requires removal of the entire contents of the Interim Waste Containment Structure at the site.”

“The RAB thanks the Buffalo District of the Army Corps and community, municipal and tribal stakeholders for their long, hard work in bringing about the decision. The RAB also wishes to thank the Niagara County Legislature for its swift resolution on March 19, and Congressman Chris Collins for his letter to Secretary James of March 22 urging the final decision be signed.”

Witryol said, “On March 14, the community was notified of a federal budget proposal to transfer decision-making authority for the NFSS away from the corps, to the Department of Energy (DOE). As of the afternoon of March 25, our local corps district could not say whether the decision would be signed by the corps or passed to DOE or whether DOE would then alter the plan. To later hear Secretary James had signed the decision was like manna from heaven.”

The 191-acre Niagara Falls Storage Site is located on the former Lake Ontario Ordnance Works site in the Towns of Lewiston and Porter. The LOOW consists of 7,500 acres of publicly and privately owned land once owned by the federal government for military operations begun during WWII.

The federally owned NFSS has a 10-acre underground, temporary storage cell containing radioactive slurry and contaminated soils from atomic weapons production in the 1940s-’50s. The clay cap for the cell prevents radon exposure and is maintained by the U.S. Army Corps of Engineers.

The NFSS wastes are stored below ground and are not ignitable or explosive.

The site environmental data collected by the Army Corps is routinely reviewed by county and state health agencies, EPA, and active members of the community. The data indicates the NFSS cap has been stable for more than 30 years and is performing as designed, now, and for the foreseeable future.

No radioactive material has been brought to the site since the 1950s.

The NFSS does not house any active operation beyond watering the cell cap, mowing the grass and collecting routine monitoring or investigative data.

The NFSS has neither smokestacks nor any similar equipment that would generate significant emissions. 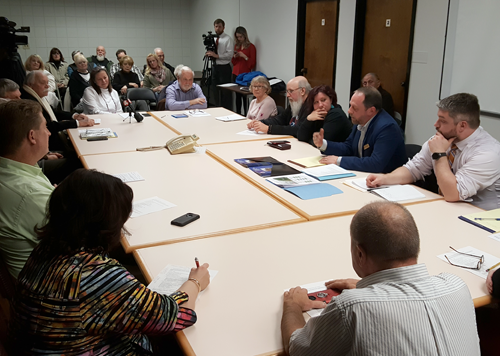