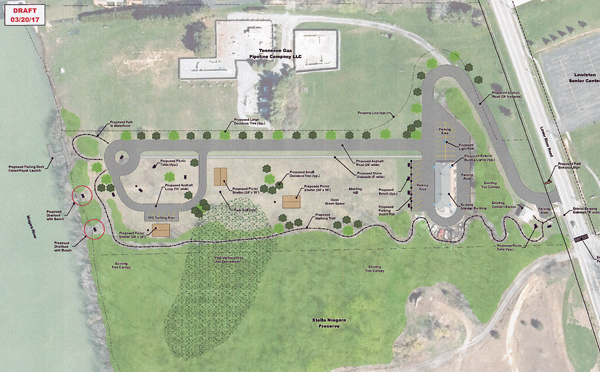 Town Board calls for additional testing

Discussions about the “Lower River Road Town Park,” considered for the Lewiston waterfront, hit a snag Monday, as the Lewiston Town Board opted to table any further action on the project and ask for additional testing.

Analyzing the 5.7 acres of town-owned riverfront property north of the Stella Niagara Preserve, the characterization report was intended to shed light on the soil conditions of two lagoons identified for study in the southwest area of the property. That area is under consideration by the town for a casual use recreation site. Included would be paving and park road construction; landscaping and walking trails; and such enhancements as picnic tables and grill areas; a park pavilion; pre-built floating docks and security lighting.

The town presented a conceptual plan to the Niagara River Greenway Commission recently and was awarded $700,000 in funding for the project from the Host Communities Standing Committee.

Monday’s review of the 167-page site characterization report was intended to shed some light on the environmental health status of the property, namely the current soil conditions in the two storage lagoons examined. They were constructed on the site to house contaminants found as the property was being remediated as an outfall, as part of the Lewiston Master Sewer Improvement Area project in the 1970s.

The GHD report failed to illuminate.

Formerly known as “The Meadow,” the land area under consideration is located north of the Stella Niagara WNY Land Conservancy property. It was used earlier as a water intake station for former Lake Ontario Ordnance Works activities in the 1940s and ’50s. The land was transferred to Town of Lewiston ownership in the 1960s for development as an outfall site for the new Water Pollution Control Center built in the 1970s.

At that time, underwater studies were performed on two intake pipes that revealed accumulations of silt and metals in the north pipe. Also suspected was a practice of discharging materials from the LOOW site into the river, according to 62-page report done in the 1970s by Krehbeil Associates Inc. in Tonawanda.

Calling for greater examination of the intake pipes in question, the Krehbeil Associates report stated, “It appears that chemical solutions were illegally dumped into this structure over a period of time and that, because of the relative low velocity of liquid passing through these large pipes, that the material settled out in the two 60-inch pipe rather than be carried into the river. Based on our present knowledge, the point at which the chemicals were introduced into the outfall structure can’t be determined. The illegal dumping could have originated at the intake well, pump building, along the 42-inch line or at the old ordinance works which is now the site of SCA, formerly Chemtrol.”

As a result of the Krehbeil finding, samplings were conducted in 1978 by Buffalo Testing on the residual silts built up in the north end piping. Found in varying amounts were a variety of metals, including lead, mercury, cadmium, chromium, nickel, zinc and copper, arsenic and PCBs. At the time, Krehbeil recommended the affected pipe areas be thoroughly cleaned, with lagoons constructed on the Meadow property to contain the materials.

That report was furnished to Lannon last year by Witryol, which spurred the town’s expanded study of the property into the lagoon areas.

GHD environmental scientist Kathy Galente, who authored the report, provided a brief overview Monday of two samples studied with respect to metals and organics to Supervisor Steve Broderick and board members. She said GHD reviewed the 62-page Krehbeil report, which provided earlier details of the 5.7-acre land area.

“In the report, we summarized how two samples have been collected from the intake/outfall pipes – one sample from each pipe,” Galente said. “Those samples were analyzed for metals and a test called ‘whole alginated organics.’ That test … had a stipulation where if there was anything detected greater than 1 part per billion (ppb), they would have to do some additional sampling … to see what was contributing to that.”

Galente explained the ppb reference was “not a regulatory guideline; it was just an arbitrary number” (for sampling and actions taken).

Galente said supplemental testing found concentrations for both (PCBs, 1ppm; lindane, 1.3ppm), “With today’s concentrations, lindane would be well below; PCBs would be slightly above the current recommended swim cleanup criteria.”

Regarding the presence of hazardous waste, Galente said criteria such as discarded chemical products, a byproduct of specific manufacturing or it being toxic in certain compounds above certain thresholds, would need to be considered.

Other samplings revealed metals of varying concentrations, but again nothing “hazardous,” Galente said.

“Based on this limited knowledge we have from this report … we did a representative sampling … of 12 boring locations, ” Galente said.

She explained GHD collected samples from ground surface down to a depth of 11 feet, with composite samples at points generally ½ foot to 1 foot below ground surface, down to full depth (11 feet). Generally, samples were done from 1 foot to 8 feet below grade.

“We did those analyses; we didn’t have any detections, VOCs or other than some very minor background … very, very low concentrations, well below criteria.” Galente said. “Nothing for VOCs, SVOCs, PCBs, pesticides.”

Galente said samplings did reveal elevated arsenic concentrations for the metals. But she discounted those findings, saying they did not fall within the NYS DEC Part 375 recommended cleanup criteria.

“The key is you can leave material greater than the criteria in place, provided that the 0- to 2-foot contact zone where you might have public contact (is addressed), provided it meets that criteria,” Galente said.

She noted the arsenic concentrations were above the Part 375 standards, which resulted in additional studies in six locations at the 0-2-feet zone. “Of that … location, two still exceeded the Part 375 criteria.”

Galente said GHD samplers did contact DEC where additional information was exchanged on the 1970’s work, which provided for additional studies by GHD.

Of 12 boreholes, two were within the lagoons, one in an east location, one west. Additional sampling was done in the 0-2-foot contact zone.

“Of those, we did have an exceedence of arsenic,” Galente said, noting they were found in boring locations SB-2 and SB-9.

She said the town’s response here would be to limit public contact. This could be done by placing clean soils above the area in question or creating some type of impervious contact, such as a cement floor.

“We felt that those two spots … could be managed … without having to do any removal of material, managed in place and incorporated into the design of the park,” Galente said.

She explained DEC reviewed the report and “essentially (they) didn’t have any comments.”

Galente summarized DEC’s response as, “there’s nothing out here that would cause us concern that we would have to put into a (remediation) program.”

She told the board the lagoons do not qualify as a Superfund or brownfields site.

“We feel the site is well characterized,” Galente said of the GHD report.

That did not sit well with councilmen Morreale and Jacoby, who both called for additional testing on the west end of the lagoons near the river’s edge. Both also called for the Lewiston Environmental Committee to be far greater apprised on the complete GHD studies performed thus far and still to be done. Further, they, as well Environmental Commission Chairman Wolfgang, recommended Lannon and Galente appear before the group.

Councilman Al Bax suggested sampling be performed at greater depths, and all board members urged additional samplings, with up to six testings done.

Broderick said he fully supported the Town Board request for more testing.

“Again, I am going to state that we as a board do not want to put a park on a property where it shouldn’t be. “I’d be the first one to say (that) if we found something down here, forget it,” he said.

“I support Rob Morreale, John and Al and Bill’s decision to do more testing at the site,” Broderick added.

In her comments, Witryol criticized the GHD report for its limited sampling performed and for GHD having a complete lack of a plan before it even started.

“Even if more sampling is conducted … given the sampling (already done), you’re still going to get sampling that either doesn’t characterize the contamination or is diluted.”

She closed by advising the town seriously consider what its next step should be, and consider its expense should a cleanup be required.

“Once you find it, you can’t just say, ‘Well, we’re going to leave it alone, and turn away.’ … You’re going to have the liability if you do sampling that does, in fact, trigger any sort of brownfields requirements,” Witryol said.

“I have zero confidence in the characterization report that did not comply with the standards you use before you even get the test results,” she added, and asked for more testing.

Witryol suggested the board consider an independent firm that specializes in brownfields perform the study, instead, and do a complete analysis that fully characterizes the site.

“What was done here does not fully characterize the contamination. There are many, many flaws in this report,” Witryol said.