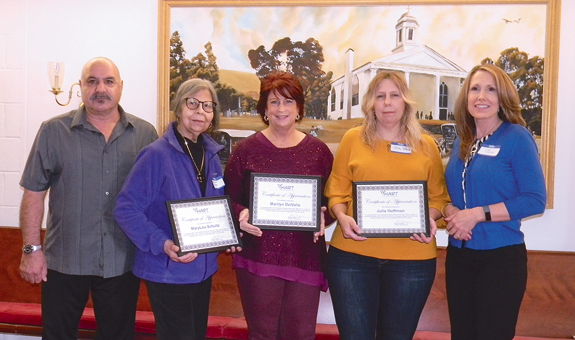 HART Executive Director Lisa Lannon (right) recognized three long-term caregivers who have been affiliated with the service agency since the 1980s. Shown, from left, are MaryLou Schultz, RN; Marilyn DelValle, PCA; and Julie Hoffman, CAN. Joining them at left is HART board member Vanik Aloian, a Summer of '69 All Star Band member.

Founded in 1982, HART’s free referral service maintains as its mission, “to enable members of the Niagara County community and adjacent areas to maintain quality of life in their own home by linking them with qualified and affordable assistance.”

Lisa Lannon, HART executive director, discussed the value of this community organization, one that has been serving northern Niagara for decades.

“Many of you newer caregivers may not realize that HART began in this church back in 1982,” she said. “Rev. Paul Moore realized there was an unfulfilled need in the community for seniors needing help in their homes, from meal prep up to in-home care.

“And on the flip side, there was an employment need in the community. So he called on other faith and community leaders assembled a committee, and HART was established.

“Without the support of the church … HART would not be able to operate and serve the community like we do.”

Rev. Elizabeth Morgan of First Presbyterian commented, “We celebrate the wonderful ways in which HART serves so many in this community.” Turning to the assembled caregivers, she added, “We know the difference they make in the lives of those they seek to care for.”

“We really appreciate all for what you do in the community,” Lannon said.

Closing, Lannon said HART is now in the process of relocating its offices within the First Presbyterian Church downstairs and told all to look for an announcement of its open house. She also invited all to the team’s “Rockin with HART” fundraiser, featuring The Summer of ’69 All Star Band and special guest, Grammy-winning songwriter Gary Baker. The show starts at 6 p.m. Saturday, April 6, at the Lewiston Events Center. Open to the public, the event features a performance by the Lewiston-Porter Jazz Ensemble at 6 p.m., the Summer of ’69 at 7 p.m., basket raffles and guest celebrity bartenders throughout the evening.

For more information on HART and its services, visit online at www.hartprogram.org, “Like” it on Facebook, or call 716-754-8313. 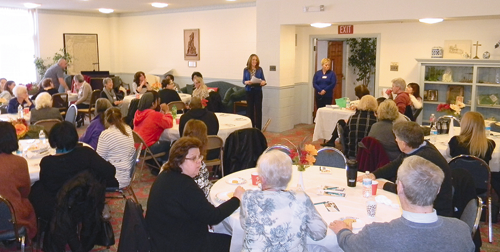 Lannon discusses the history of the HART program before a gathering of caregivers Thursday at Lewiston’s First Presbyterian Church. (Photos by Terry Duffy)