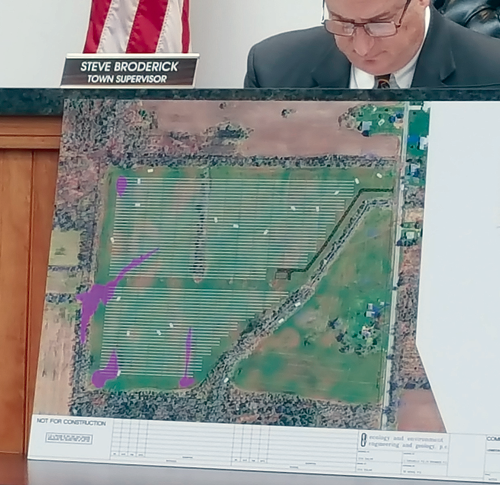 Community solar is beginning to make waves around Lewiston.

Utilizing New York State Energy Research and Development Authority (NYSERDA) funding mechanisms, independent power companies have been busy soliciting residents/property owners in certain eligible areas of the state, including many in Niagara County. People are asked to sign on as a partner with the provider, with the enticement being lower electric bills, or possibly as an additional source of revenue realized through the partnership.

The concept of a utility-scale solar energy system is gaining popularity and luring the interest of many, with solar panels, either mounted on roofs of residences or placed on properties, becoming a familiar sight.

Recently, the Town of Lewiston created its own solar law, allowing interested property owners to install solar panels or large-scale systems on its properties. Other towns in the county, notably Cambria and Wheatfield, have enacted similar laws, while others such as Porter are in the process of considering such a measure.

One such project was recently approved in Lewiston for a Swann Road property owned by Town Building and Zoning Inspector Tim Masters.

And just this past Monday, the Lewiston Town Board approved a plan for a 29-acre utility-scale solar system on nearly 73 acres of land owned by Donald and Janice Laurie at 2643 Moore Road. The solar project, to be constructed and managed on a lease arrangement by OYA Solar Inc. of Toronto, will generate 5 megawatts of power.

While attractive to some, the idea of a utility-scale solar energy system on an individual property can also be unpopular with neighbors. Lewiston Town Board members learned as much at Monday’s public hearing prior to approval of a special use permit/site plan for the Moore Road site.

A number of residents from the predominantly rural neighborhood came out in complete opposition to the plan. Concerns raised included disruption to the neighborhood; impacts on the topography, wetlands and wildlife; drainage issues; visual impacts on aesthetics; noise; questions over the location; construction and service-related activities; impacts to nearby residents, the roadway and traffic; the need for fencing; and potential safety impacts for aircraft from glare.

Marcy Lombardo of Moore Road, who works for The Sentinel, and whose property adjoins the proposed area on its rear northwest corner, spoke for many as she raised concerns on the many disruptions.

“I have spent most of my life dreaming and working toward owning my own green space in a picturesque country setting. I am opposed and upset … with the installation of a solar farm impacting wildlife habitat working farmland, to forever alter this green space at the visual expense of Moore Road residents,” Lombardo said. In particular, the resident voiced her concerns on the presence of wetlands, existing drainage issues, potential impact of runoff, and disruptions to the area’s topography from the neighboring utility-scale solar energy system. “My acreage contains two ditches at the property line on each side that carries the majority of the storm water runoff from the southeast side … into the freshwater wetlands.

“As everyone who lives on Moore Road knows, that after any significant (rainfall) or snowmelt, we have drainage issues, which finds ditches on the road overflowing and yards turning into ponds.”

She went on to express fears the project would go on to “create more of a nightmare – water for residents.”

In response, Greg Rosetti, principal of OYA Solar, spoke at length on the various particulars of the project in an effort to allay concerns of residents on the land, visual and neighborhood disruptions.

“The construction itself, there is no grading, there is no stripping of topsoil and cutting and filling, which you have in a traditional construction project. We do not alter the topology of the land at all,” he said.

Rosetti pointed out the 29-acre solar project would have two fenced sections separated by a hydro corridor that cuts through the middle of the property. “The arrays themselves would be fenced, but that’s the extent of it.”

As to the visual impact, he said the front area of the solar farm that borders a creek is treed and that would remain unchanged. “From a visual screening perspective, (the) concerns about how this is going to impact the visual dynamic of the area … this will have a visual screen. (And) it’s a 200-foot setback from the road to that area.”

He described the panels as being a single action, tacking solar system. Mounted on supporting hardware that will screw into the ground, the panels would sit roughly 4 feet off the ground, and tilt at 60-degree swings to follow the sun. The maximum height of the panels would be 7-1/2 feet at tilt swings in the morning and evening and 4 feet when flat.

The solar panel area would be fenced and offset by natural surroundings and lattice enhancements. “With that screening there, you’re really not going to be able to see the array when you’re driving along Moore Road,” Rosetti said. “This is not a very tall structure; the land in that parcel is very, very flat. So you’re really not going to see it.”

He discussed the panel’s feature and anti-glare coating.

“Just by virtue, they’re meant to absorb the glare and not reflect it. We never had issues with glare on these arrays,” Rosetti said, noting such panels are even in use at major international airports. He said OYA Solar would be happy to provide a glare study as part of the permit. “I can guarantee you that there won’t be an issue with glare on the site.”

He reiterated that disruptions to the land would be minimal. “Everything is going to stay where it is from a topology standpoint. … At the end of the day, there is no altering of the overland flows for this area.”

With screw-in construction of the mounting hardware, there would be “no substantial change to how water infiltrates into the existing field, or how the water hits the field.”

Rosetti said, “These wetlands bodies would remain. He said the project has gained concurrence from the Army Corps of Engineers on the unlikeliness of any potential negative impact. Rosetti said the Corps would also review the site during construction to ensure there is no impact to the wetlands.

That issue was raised later on in the session as town Engineer Robert Lannon, principal/vice president of GHD Consulting Services, discussed part two of the state environment quality review with the Town Board.

Discussing the “determinations of significance” in SEQR part three, Lannon said a number of mitigation measures would be required during construction, including stormwater/floodplain mitigation to address potential erosion, drainage and flooding impacts.

Regarding the issue of farmland being converted to non-agricultural use, Lannon said the 29-acre size of the project versus full land – nearly 73 acres – was also taken into consideration. In addition, he said impact of the mounting hardware on the land is considered low, as the structures are temporary in nature.

Regarding aesthetics, Lannon said these would be addressed via screening to mitigate visual impacts, adhering to federal wildlife regulations on any threatened wildlife and restrictions on tree clearing. Regarding noise, odor and light issues, Lannon described them as being temporary during construction and said there would be no impact during normal operation of the solar array.

With that, Lannon recommended issuance of a negative declaration. Soon after, Town Board members gave their approval to the site plan/special use permit for the Moore Road utility-scale solar energy system. Included was requirements that all mitigative measures listed earlier be addressed, plus adequate screening and landscaping of the property, as well the aforementioned glare study – all to be completed by OYA Solar. 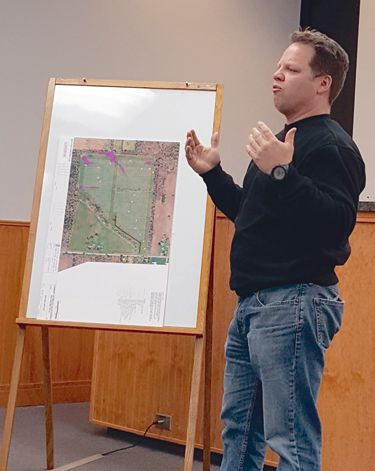