Pictured is a scene from the Great Contraption Race in Buffalo.

A review of news from the River Region

The year 2018 certainly was an active one on the River Region scene. Over the past 12 months, our area has been a part of many changes – much of it good, some of it not. We witnessed the gains, encountered the loss, and were a part of this area’s many, many good fortunes, including experiencing the warmth of the community and its residents.

With the clock ready to swing into 2019 (Wow, Y2K was really almost 20 years ago?), let’s take a look back at a few of the many news happenings of 2018, as reported in the pages of The Sentinel.

The following excerpts were taken from the year’s biggest stories.

“The van recently went down with a transmission problem and has close to 200,000 miles on it. Both boards have requested help from New York State Sen. Rob Ortt in buying a new van.

“ ‘The senator is aware of our situation and, if he has room in his budget, we will receive a new van,’ Johnston said.”

It Happened to Alexa Announces Relocation

“As new restaurants open and development awaits at Center and North Eighth streets, word came that a longtime local face opted to relocate out of the Village of Lewiston.

“The It Happened to Alexa Foundation, a 15-year fixture on Center Street, announced it would relocate from its Lewiston offices to a larger operation in the Larkin Building on Exchange Street, just east of downtown Buffalo.

“ ‘It’s in progress,’ said Dr. Kate J. Fowler, IHTAF executive director. She added she expects the move around April 1, with an announcement for a community open house in coming weeks.

“Fowler said IHTAF sees this move to Buffalo as one that will provide greater overall exposure, community assistance and benefit to the foundation’s purpose as a whole.

“ ‘We look at this as a time to grow,’ Fowler said of the pending relocation from Lewiston to Larkin.”

Fire Company Members Support One of Their Own

“It was warm thoughts on a chilly, snowy Saturday in Lewiston, as members of area fire companies from western Niagara County gathered their members and trucks in a growing show of support for one of their own.

“Dubbed ‘Timmy’s Battle,’ the assembling of dozens of fire company members outside the Lewiston No. 1 Fire Co. firehall on North Sixth Street served as a testament for the love and support over past weeks for Timothy Richardson, a fire company Explorer from Hy-View Fire Co. in Depew.

“Richardson, a 16-year-old high school student with a passion for the fire service, had taken ill with what was initially thought to be a respiratory-related infection. Following a series of tests, he was ultimately diagnosed as being in the early stages of leukemia, a disease that has no cure. …

“Upon hearing the diagnosis, word immediately began to spread throughout the area, on TV, and online – particularly so in the fire fighting community. …

“Matthew Grainge, president of Lewiston No. 1, said he heard of the growing support for the young Explorer on Facebook from Lewiston No. 1 member Mary Arnlmrzyctt. He soon began to gauge the interest of a number of fire companies in western Niagara County to participate in a local effort.

“ ‘We’re a family; we’re always here for each other,’ Grainge said of the ongoing support from the fire community – which has astonished the boy’s family and ‘Timothy’s Battle’ supporters.”

“Melloni’s Market Place ceased operations in Youngstown last Saturday, having previously announced plans to relocate to the Town of Tonawanda.

“As a generous parting gesture to the community, owners Lou and Diane Melloni donated a large number of foodstuffs they had remaining in their store to the Care-n-Share Food Pantry in nearby Ransomville.

“In response, Inter-Community Services, the parent organization to Care-n-Share, said it was over- whelmed by the gracious offer.

“ ‘We are so appreciative that they thought to give the pantry all of this food! Our freezers and shelves are stocked by their generosity!’ board member Lori Adamson said. ‘As saddened as we all are at the relocating of this small business, what a kind gesture. Lou and Diane are truly a class act!’ ”

“The Town Board moved ever closer to construction of more patio homes in Lewiston following approval of a preliminary plat for LMK Realty. This will allow for 15 two-unit one-floor residences to be built on the northeastern side of North Ridge Drive, from Legacy Drive west to West Eddy Drive.

“ ‘The Planning Board recommends approval of the preliminary plat,’ said Council member Rob Morreale He referenced a May 23 Planning Board letter and other communication from the town’s engineering department containing various conditions that needed to be met. …

“ ‘The developers are anxious to move forward on this project,’ said Ryan Parisi, attorney for the town. He requested board approval for a June 25 public hearing on the issue, provided the developers meet various conditions as outlined by the town’s engineers.”

“Those issues and how the DEC ultimately decides on CWM bear huge on the community.

“At issue is CWM’s proposal for a Residuals Management Unit 2 hazardous waste landfill at its Balmer Road facility. CWM first submitted the expansion application allowing for RMU-2 in 2003. It was met with widespread community opposition. If ultimately approved by DEC, it could lead to construction of a new RMU-2 facility and trigger the return of assorted large-scale hazardous waste landfill operations, including PCBs, to the River Region.

“As said, it’s a prospect that many in the area oppose and have come to fear.” 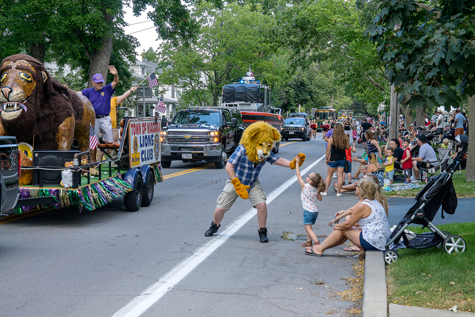 “The annual Youngstown Labor Day Parade took over the village’s Main Street strip on Monday. Presented by the Village of Youngstown and local residents and businesses, visitors from throughout the area attended this Niagara County favorite in celebration of labor, the nation’s heroes and traditions, and life in the Youngstown community.

“Participants included the MacKenzie Highlanders Pipes and Drums, police and fire companies, area youth sports and dance organizations, local businesses, Old Fort Niagara, the Youngstown Lions Club and Town of Niagara Lions. Crowds lined the village’s streets and, despite the heavy wind and rains that followed, many stayed on and enjoyed Labor Day in Youngstown.”

“Don’t look now, but it’s just around the corner.

“Presented by the Kiwanis Club of Lewiston, visitors from the River Region and beyond can look forward to an expanded festival and even more fun this year with great rides and attractions on the Amusements of America midway, the throngs of vendors and concessions, great foods, the entertainment and, of course, those delicious Niagara County peaches.

“More than 35,000 people are expected to attend this year.

“Come 5 p.m. Thursday, it will be peaches and a whole lot more, as Kiwanis officially get things underway.”

Lewiston Town Board Approves Special Use Permit for Solar Project

“The Lewiston Town Board gave its OK on a new a solar facility under its new solar law on Monday. Specifically, it approved a special use permit to allow for construction of a proposed utility scale solar energy project on property owned by Town Building/Zoning Inspector Tim Masters at 1897 Swann Road.

“But the vote came not before hearing significant opposition that night and over past weeks from Swann Road neighbors. The proposal was first introduced at an Aug. 27 public hearing. Many told the board they are steadfastly opposed to the solar panel complex covering some 17.3 acres. The project, when complete and operating, would generate 5.3 Mw of electrical power. A public hearing process opened on Aug. 27 and continued over past weeks with the Town Board receiving comments throughout this month.

“This week, residents opposed to the plan again came out to voice their thoughts in nearly a 90-minute discussion on the matter.”

“Last month, joining a host of Halloween celebrations going on throughout the River Region, Lewiston resident Mike Carroll presented yet another one of his now-famous get-togethers at the Brickyard Pub and B.B.Q.

“ ‘Every year  I throw a Halloween party at an establishment in Lewiston,’ Carroll said of his annual Halloween Bash. ‘This year it was at the Brickyard in Lewiston. I do it every year. I charge a fee at the door, and the proceeds go to a certain family or cause.’

“This time, however, it was a little different. On Wednesday, Sept.      19, Janice L. Previte, 55, of Lewiston, lost her six-month battle to leukemia at Roswell Park Cancer Institute in Buffalo. The mother of two children – Alicia and Frank Previte IV – she worked as a supervisor at Life Technologies/Thermo Fisher Scientific in Grand Island. Janice was the wife of Lewiston Police Chief Frank Previte III.

“As the community joined with the Previte family in honoring the memory of this special mother, wife and lifelong River Region resident, Carroll made the offer that the proceeds of this annual benefit would be dedicated to her family. …

“Following days of diligent planning and promoting this benefit – in the community, on social media and beyond – the Oct. 29 event proved to be perhaps Carroll’s best-attended event ever.

“ ‘(The party) this year, it was the biggest turnout we’ve ever had in four years – just under 400 people; it was 375 people. Every year it just seems to be getting bigger and bigger,’ he said. ‘With it, the donation going toward Janice Previte, lifelong Youngstown and Lewiston resident. (Her) family is very well known in the area. I think a lot of people showed up just to show their support for the family.’

“Chief Previte offered his sincere appreciation for all that Carroll did and continues to do in support of his family.

“ ‘It’s been overwhelming to see the support, the reaction. Not only what Mike’s done in organizing this, but, as a matter of fact, Mike had organized this before anything had happened,’ he said.

“Previte said he and his family continue to be taken aback by the consideration and generosity of the community.”

Yes, 2018 was a year of highs and lows, as well as promise for the River Region.