Shown are the more than 30 volunteers before beginning work.

It's the best day of the year, as Neighbors Foundation provides food for Island needy

Cheryl Chamberlain called Thursday her “favorite day of the year.”

The Grand Island High School business teacher and advisor to the school’s DECA club watched 28 students sort approximately 11 pallets of donated food for the Neighbors Foundation of Grand Island at the Knights of Columbus Hall. The food was distributed into grocery bags and later that night delivered for 50 Island families suffering from food insecurity this holiday.

It was Chamberlain’s favorite day because “the students really get a sense of what need is. I don’t think they see it unless they’re immersed in it,” she said. The students were helping Island families down on their luck, maybe with kids who go to their school, in an effort to help them have a brighter holiday.

“They know that there’s people out there that need help, and this is one way that they can give that help,” Chamberlain said of her students. “ I think they really feel good about it after today. And that’s why I like today so much because of the feeling that it gives us.”

Much of the food came from collection drives at Grand Island schools. Thursday’s sorting effort ran more than four hours and took place at the Grand Island Knights of Columbus, who annually donate the use of their hall on Whitehaven Road.

“It’s not an overstatement to say we couldn’t do it without the help of (Superintendent) Dr. Graham and the Grand Island schools. Not only what they do here today with the sorting the food and helping us get it together, but in collecting the food over the last couple weeks,” said Neighbors Foundation President Dave Conboy.

To bring in more donations, GIHS seniors Emily Kurtzhalts, Elizabeth Koyn, and Faith Gworek conducted a districtwide community service project from Dec. 3 to 7 called “A Blizzard of Caring.” Koyn said a student received a paper snowflake hung in the school for every can donated, a simple idea that brought in 5,000 donations.

“It’s so humbling,” Gworek said during the food distribution work, her second year taking part in the job. “For me after this, this is when I really get into the holiday spirit. It’s less than two weeks till Christmas and the holidays, so it really opens your mind and makes you thankful for the things that you have.”

“It’s giving back to our community,” Koyn said. “Grand Island’s such a tight-knit community. These are people we see every day, and it’s nice to just help them out during this time of year.”

A tight-knit community is made of churches and service groups, businesses and schools, with an entity like the Neighbors Foundation as a hub.

“It’s the schools, it’s the community, it’s the Knights of Columbus. It’s really a Grand Islandwide effort to support those of our neighbors that maybe need a little assistance at the holidays,” Conboy said. “If we can bring a little cheer to them, then we’re absolutely thrilled to be able to do it.”

“We’re just like every other community. We have all sorts of people from all sorts of places that come here, and it’s a very welcoming community and we look out for each other,” Kurtzhalts said.

Gworek said, “When we make all the personal bags for each family, that’s my favorite. You’re shopping and making a gift and meals for these individual families that you don’t know if you’re gonna walk next to them at Tops.”

Koyn was making a repeat visit to the annual sorting work at the K of C. “It’s just amazing seeing so many people from your school come together to try to help your community,” she said. “It sort of makes you realize that the school is part of a way bigger community. Everyone’s so excited to be here. It’s the best day of the year.” 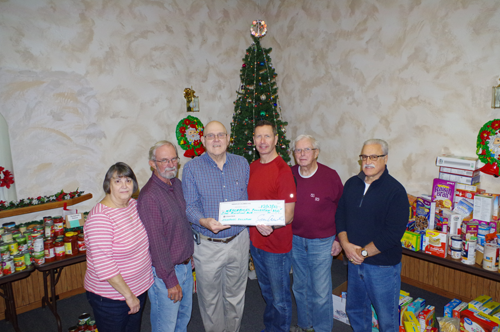