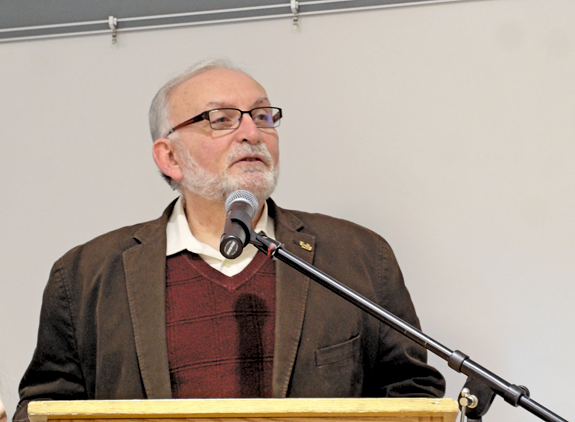 Grand Island Board of Education: Soil sample study explained at Board of Ed. meeting

Elevated levels of contaminants have been found at both Charlotte Sidway Elementary School and Kaegebein Elementary School. Both arsenic and polycyclic aromatic hydrocarbons (PAHs), at levels higher than New York State Department of Environmental Conservation’s soil cleanup objectives, were discovered on the area of land at Kaegebein near the pedestrian bridge, and elevated levels of arsenic were identified in soil near the Charlotte Sidway playground. This information was presented by Dr. Joseph Gardella, SUNY distinguished professor of chemistry, at the Dec. 10 Board of Education meeting. The testing was done as part of a comprehensive air and soil study of areas that may have been affected by pollution generated by the now-closed Tonawanda Coke plant.

Gardella and his team will make a presentation and answer questions at a community forum scheduled for 6 p.m. Monday, Dec. 17, at the high school auditorium.

Gardella explained soil clean objectives as: “If you have to clean up something and replace it with clean soil, the cleanup objective is what defines clean soil.”

Funding for the comprehensive air and soil study, which costs $711,000, comes from penalties charged to Tonawanda Coke by U.S. District Court Judge William Skretny on March 19, 2014. In 2013, Tonawanda Coke was convicted of 11 violations of the Clean Air Act, one count of obstruction of justice, and three counts of violating the Resource Conservation and Recovery Act. The company was charged a $12.5 million fine, as well as $12.2 million in community service payments.

The soil sample study is being accomplished in two phases, Gardella said. In the first phase, which was completed in January, a grid sampling was made in order to screen out areas that were of interest for further sampling and identified areas where there were no problems. In phase one, the researchers tested for 140 different chemicals at more than 200 sites, Gardella explained, adding that three regions of interest were identified.

“In phase two, then, we’ve been focusing on regions of interest,” Gardella said. “We’re testing fewer chemicals because we’ve eliminated a number of chemicals for which we’ve found no real results. We’re collecting samples in three regions of interest, from any schools, churches, and public parks that are within the area. So, some of the sampling that you’re seeing tonight are not in regions of interest. They are done to give a complete set of sampling of all of the school grounds for the Grand Island School District.”

At Charlotte Sidway Elementary School, two samples showed a level of arsenic that was above the DEC soil cleanup objectives.

At this point, the cause of the elevated chemical levels at both Charlotte Sidway and Kaegebein elementary schools is unknown. According to Graham, the school district shared the results of the soil sample analysis with the Erie County Department of Health, who referred them to the New York State Department of Health. They also consulted with Charlotte Bethany, the region chief in the Bureau of Environmental Exposure Investigation. “She reviewed the results, conferred with Dr. Gardella, and stated that there is no cause for concern,” Graham said. “Additionally, we shared the results with Dr. Rosalind Schoof, a board-certified toxicologist with 30 years assessing human health effects, due to exposure to chemical substances. Dr. Schoof is an internationally recognized expert on the evaluation of arsenic in the environment, as well as in the human diet. Dr. Schoof agrees with Charlotte Bethany that the reported arsenic concentration, as well as the polycyclic aromatic hydrocarbons do not present a cause for concern, due to the limited potential for exposure.”

According to Graham, “I also learned, from speaking to people at Sidway, that the Sidway playground had railroad ties that were used to outline the perimeter of the playground when it was originally constructed. We know that our director of facilities at the time, Mr. Perry, removed the railroad ties more than 10 years ago. This may be the reason as to why the perimeter of the playground has above-normal readings of arsenic.”

Dr. Jessica Castner, a nurse and a scientist who specializes in researching the effect of occupational and environmental toxins on human health, said that playground equipment built with wood that had been pressure treated before 2004 would very likely produce elevated levels of arsenic.

Graham outlined the school district’s next steps. “Right now, we are going to send a letter out to the entire community. It will also be posted on the district website. After that, and after the community forum, with the additional consultation of Dr. Schoof and Ms. Bethany, I’ll be coming back to the board with a recommendation. The recommendation may be that we remediate the soil at the playground. Charlotte Sidway is currently raising money for that playground so it may be very appropriate to remediate it and replace (the contaminated soil) with fresh soil.” The fundraising goal, said Denise Dunbar, principal of Charlotte Sidway Elementary School, is $145,000. “We are currently about $45,000 short.”

In addition to the upcoming public presentation on the soil sample study, two other public forums have been scheduled for Dec. 20 and Jan. 3, 2019. Both forums will provide information about the school district’s proposed capital improvement project. The vote on that project is scheduled for Jan. 8 at the high school.