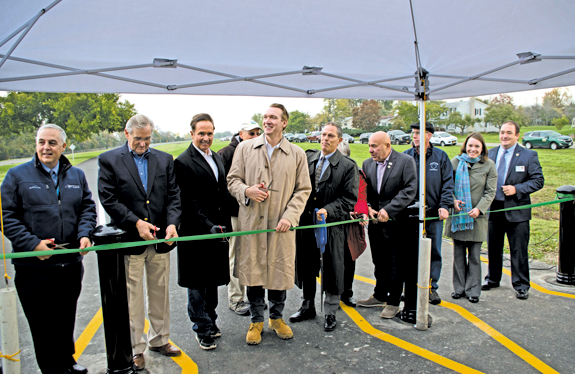 Government officials each with scissors prepare to cut the ceremonial ribbon on the West River Shoreline Trail, which replaces the West River Parkway in creating a multimodal path from Beaver Island to Buckhorn state parks. (Photo by Larry Austin)

Sat, Oct 27th 2018 07:05 am
By Larry Austin
Island Dispatch Editor
The much-debated West River Shoreline Trail officially opened Tuesday with a ceremonial ribbon-cutting on what was once the West River Parkway.
The trail opened at 10:30 a.m. with a brief ceremony near the Whitehaven Road overlook. On hand were representatives of New York State Parks and the New York Power Authority, as well as U.S. Rep. Brian Higgins, Assemblyman Angelo Morinello, Town Supervisor Nathan McMurray, and Grand Island Chamber of Commerce President Eric Fiebelkorn.
Mark Mistretta of State Parks led the event for the unveiling of a seven-mile multi-modal path on what was once a parkway from Beaver Island to Buckhorn parks.
"Yes, we're certainly connecting two parks, Beaver Island and Buckhorn. But it's so much more than that. We've got the Tonawandas, Grand Island, City of Niagara Falls, all connecting," Mistretta said. "And then everything else along the shoreline trail is really what's adding to the quality of life here in Western New York."
Mistretta joked, "And we're really thinking it's going to be successful based on the number of users we saw using the trail during construction. Now that it's open, we'll see a few more."
Mistretta said the trail opening is an example of the vision of State Parks Commissioner Rose Harvey and Gov. Andrew Cuomo in "connecting greenways and communities."
Mistretta said the project couldn't have been done without the support of two Islanders: Town Supervisor Nathan McMurray, who he called an "early champion along with members of the Town Board," and Paul Leuchner, a commissioner emeritus of the Niagara River Greenway Commission and a member of the town's Parks and Recreation Advisory Board.
Congressman Higgins, who represents Grand Island in the House of Representatives, was "instrumental" in securing federal dollars for the project, said Mistretta, but during his turn to speak, the Congressman deflected the praise and said, "I think the reason we're here is the vision of Nate McMurray."
"This will far outlive his tenure as your leader in this great town. It is a major achievement. It will improve the life quality to the benefit of all the families in this great town," Higgins said.
Higgins said the projects will be a catalyst for economic development.
The project was vehemently opposed by many residents who live along the West River, who said they supported the establishment of a path along the river, but opposed closure and removal of the parkway.
McMurray said at the height of the debate on closing the parkway, he received a letter from Higgins that urged him to fight for the plan for the trail because it was "a once in a generation chance" in preserving the waterfront.
Alluding to the opponents of the parkway closure, McMurray said to those who will use the new trail, "We need to work together on this and other projects. We need to be respectful of the neighbors here because when we come over here, we're going to be guest of these neighbors."
The aforementioned speakers were joined by Deputy Town Supervisor Jim Sharpe, Highway Superintendent Dick Crawford and Councilwoman Jennifer Baney in cutting the ribbon on the $2.5 million project.
Categories
Around WNY Dispatch Dispatch feature Home feature