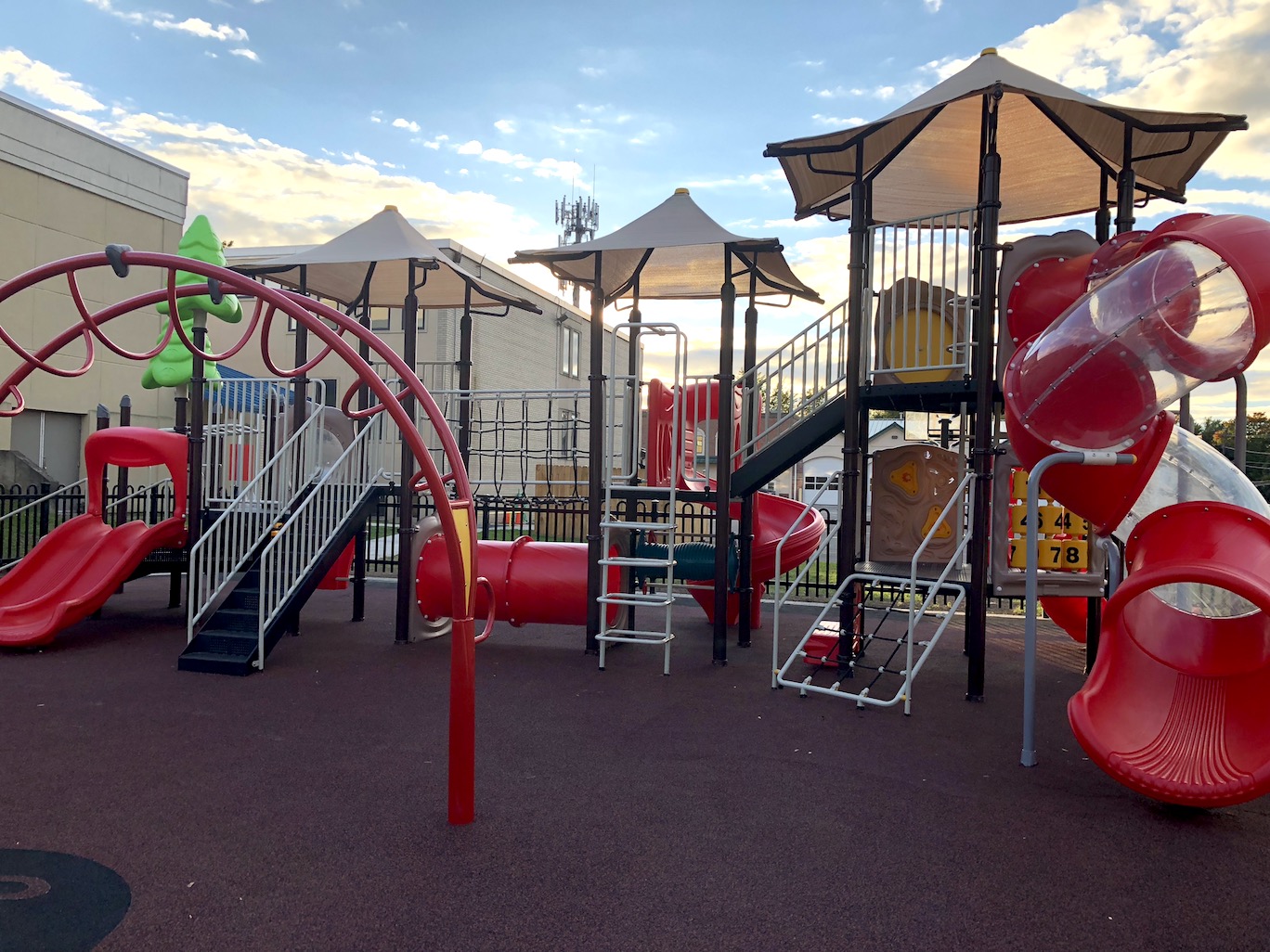 by jmaloni
Sat, Oct 13th 2018 07:00 am
Site named in honor of Dr. Irene Elia; Bishop Malone on hand to celebrate Mass
Article and photos by Joshua Maloni
Managing Editor
The Most Rev. Richard Malone joined with students, teachers, faculty members, community leaders and friends to officially open the St. Peter's playground on Friday. The recreational space is located behind the gymnasium and adjacent to the Lewiston elementary school. It was dedicated to Dr. Irene Elia.
"A few years ago when we first discussed the possibility of a playground, the first person to come forward to give a most generous gift was Irene," said the Rev. Monsignor David LiPuma, pastor of St. Peter's R.C. Church. "Today, Irene, we know how much you love our parish, and you love our school. And we would not be where we are today - and I mean this most sincerely - without your persistence, your passion, in growing and supporting our school and our parish."
Elia is on the school board and serves on the finance council.
"She keeps us honest in going forward all the time," LiPuma said. "This woman is truly a great, great lady. She's a dear friend and confidante. She's an inspiring example of faith in God and hope for all and true charity. And like this beautiful tree that stands here today" - which now has a plaque in Elia's honor - "Irene and the Elia family have deep roots in our community of Lewiston. ... Like this tree branches, Irene, your love reaches out to all of us."
St. Peter's School Principal Maureen Ingham said Elia "is more than a donor. She is more than someone who comes to church. She has stolen my heart. We have built a friendship that I cherish each and every day."
She joked, "If my phone doesn't ring once a day, with her checking up on me, something's the matter!"
Elia was joined at the tree by her great-nieces and great-nephew, St. Peter's students Kiley, Addison and Colbie Elia, and Charlie Martin.
The motivation for her donation, Elia said, is "the children are beautiful."
"It's a wonderful, wonderful parish," she added. "All the parishioners are beautiful.
"They have the best school in the whole world. And now they have the best playground in the entire world. It's wonderful."
She said it was a team effort, with "hundreds and hundreds of parishioners and the people in the school" contributing to the playground. 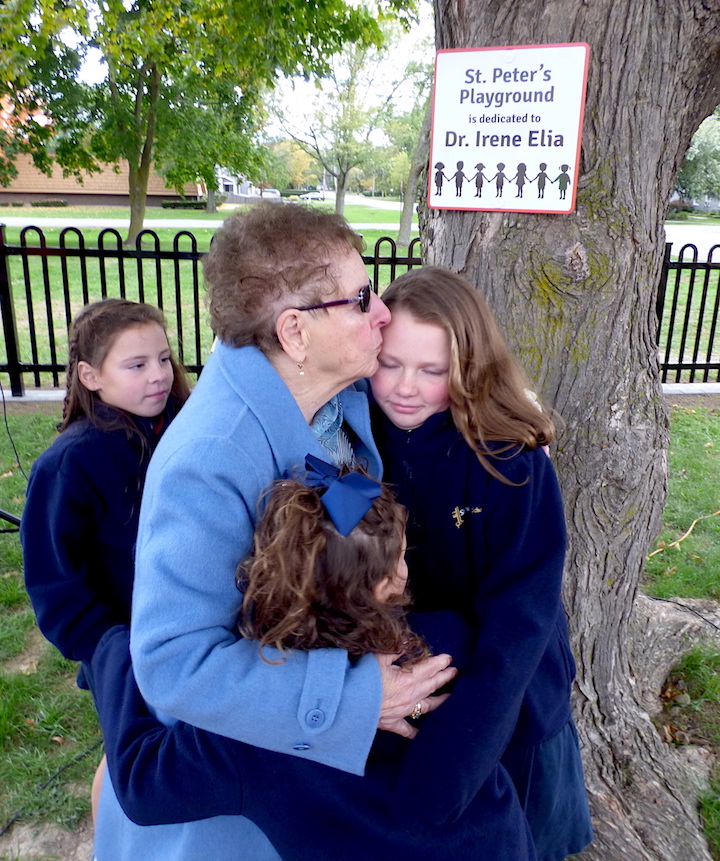 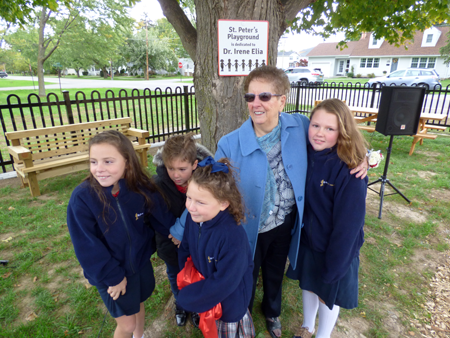 Dr. Irene Elia is joined by her great-nieces and great-nephew at a tree with a plaque in her honor. 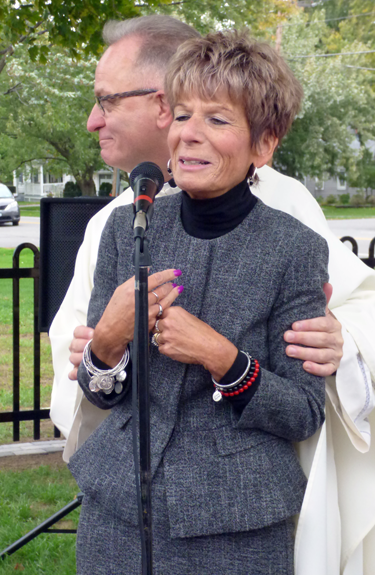 The Rev. Monsignor David LiPuma shares a moment with St. Peter R.C. School Principal Maureen Ingham.
Ingham thanked everyone who joined in the ceremony to "make this the most spectacular day ever. We've been waiting and waiting; everyone's been patient. I couldn't be happier."
The playground was the brainchild of Libby Broderick-DeSilva, who said she had more than a little help in bringing the vision to life.
"We really let the kids design it," she said. "One of our retired teachers who was on the committee, Judy Penzotti, went to each of the classes and asked the kids for their wish list - what they wanted to see on their playground. And then she combined the list and found all the common things that were amongst all the kids. The tube slide and the tunnel were all their ideas. We just gave that list to the manufacturer and they designed it. We went through a bunch of reviews of it, and it really came out great. We're really thrilled that it was the kids' design."
The playground measures 60 feet by 90 feet. It cost around $100,000. Broderick said fundraising began more than four years ago, with design and construction commencing about a year later.
LiPuma thanked donors. He recognized playground committee members Ingham, Broderick-DeSilva, Penzotti, Michael Elia, Kristin Savard, John Scozzofava and Town of Lewiston Councilman Bill Geiben. Additionally, restaurateur Gary Macri was given a picture of students surrounding the playground as a token of appreciation for meals he donated for St. Peter's fundraisers. 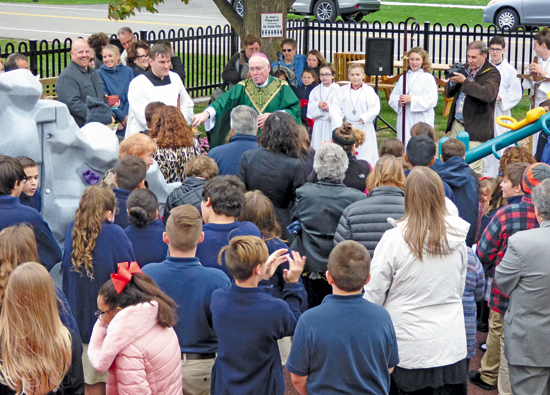 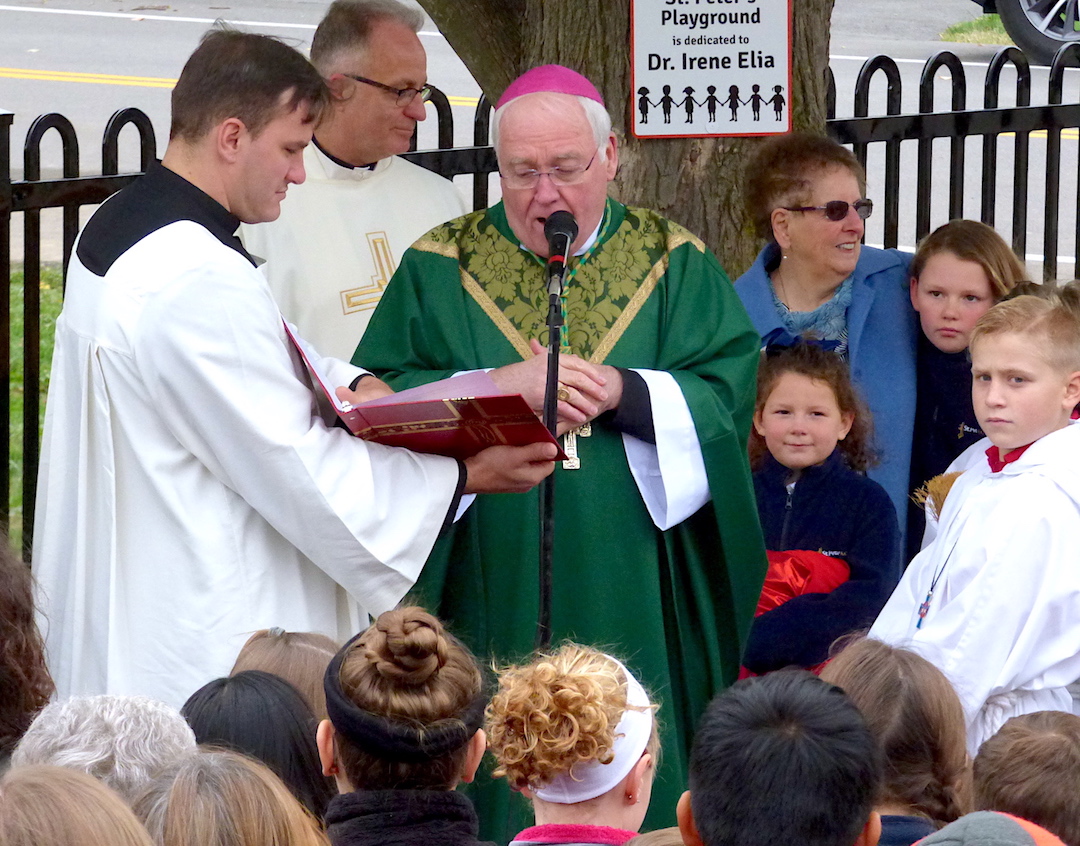 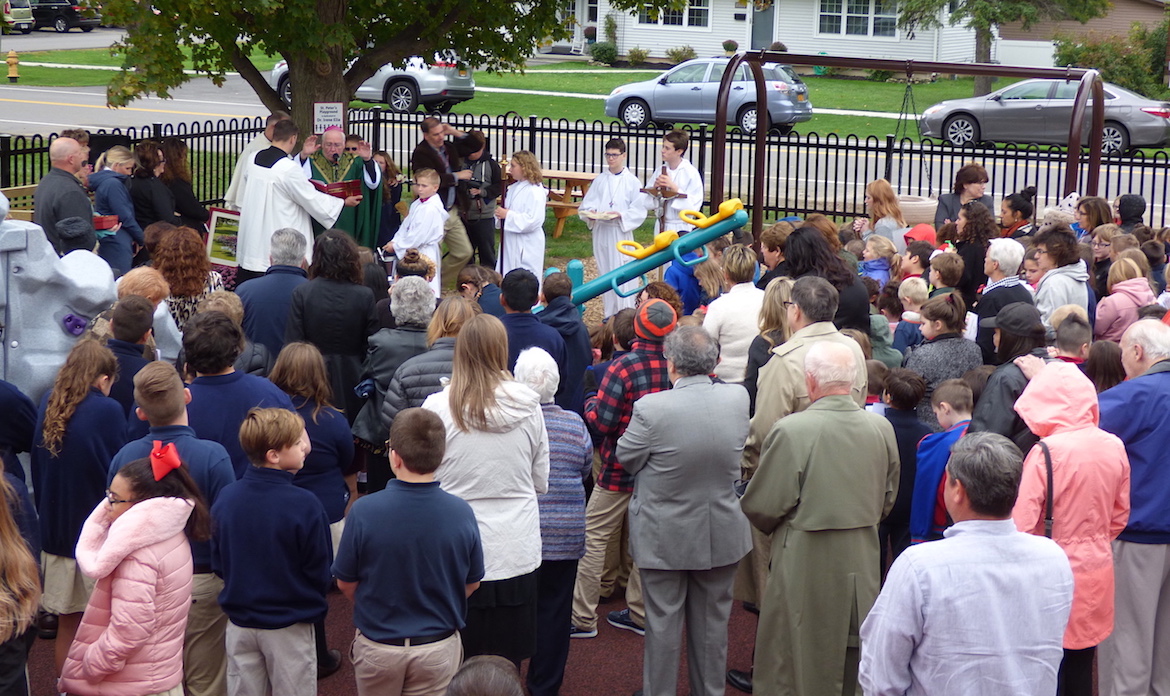 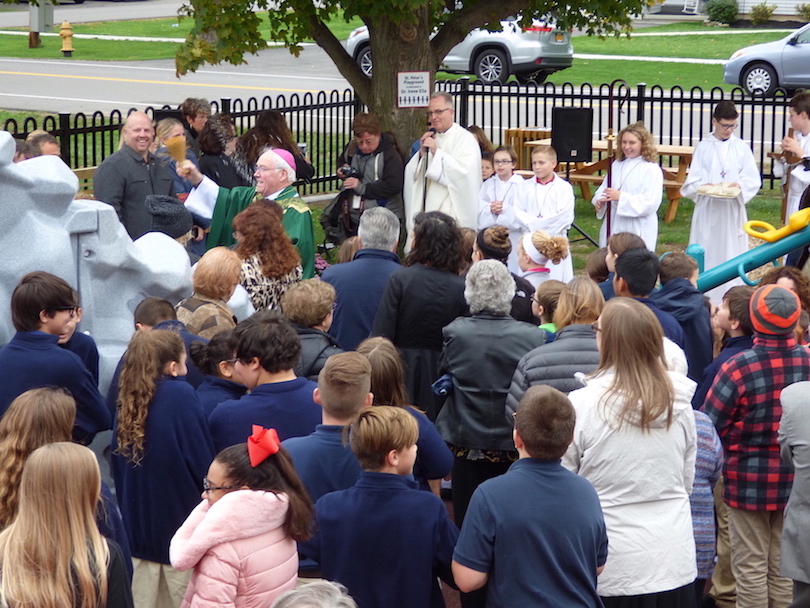 The Most Rev. Richard Malone dedicates the new St. Peter's R.C. School playground as guests look on. The recreational area is located between North Seventh and North Sixth streets in Lewiston. 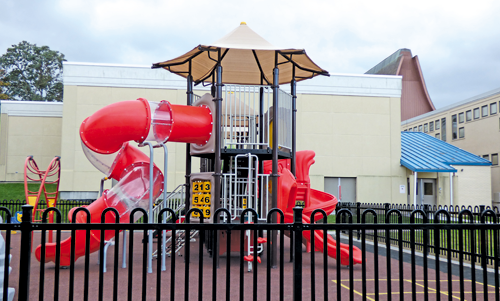 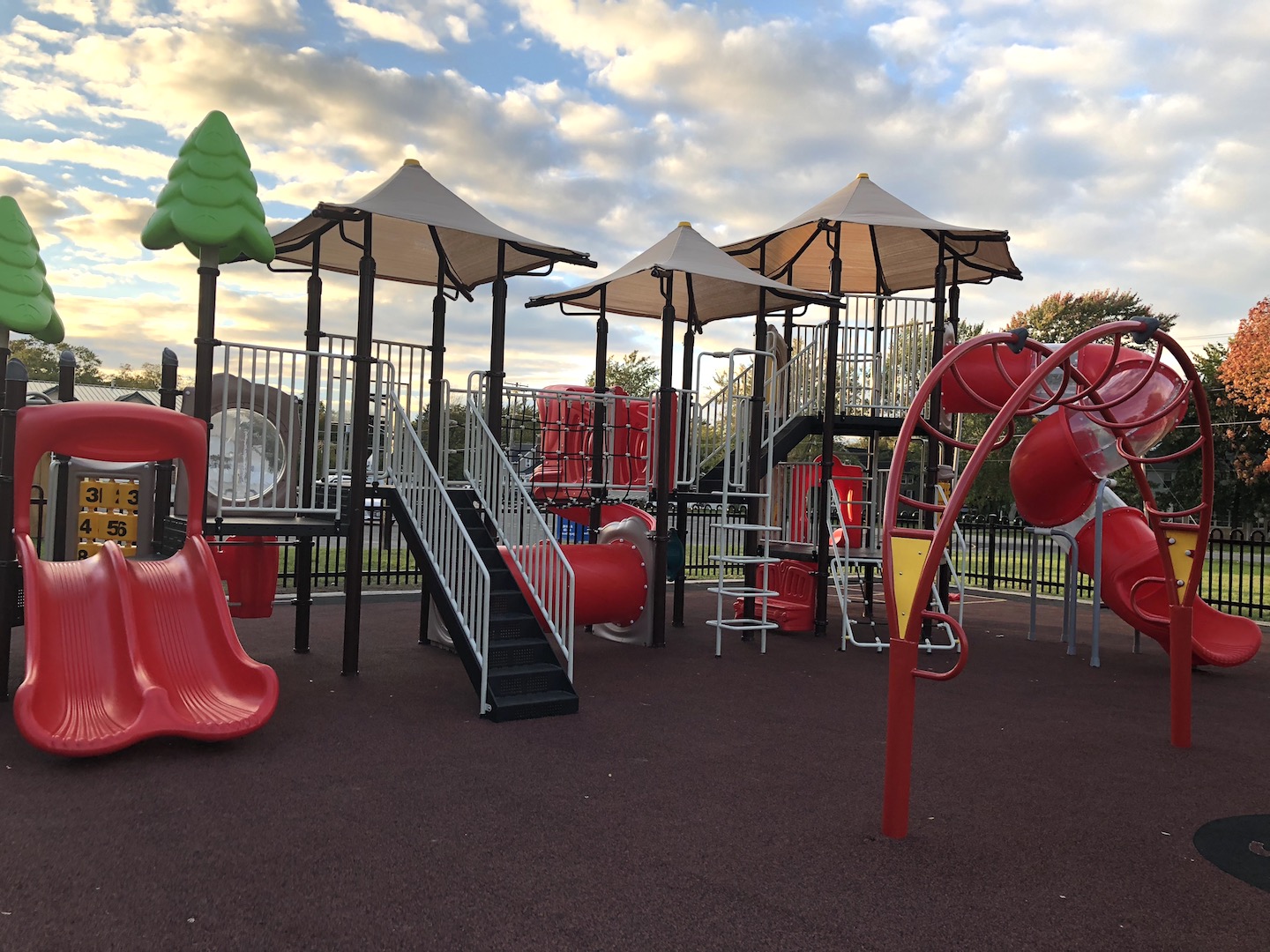