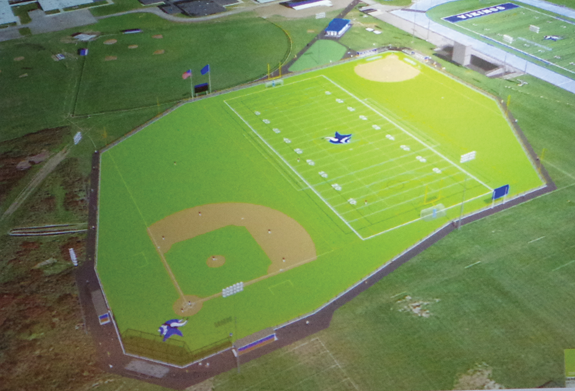 A synthetic athletic field with baseball and softball diamonds next to Masters Field was part of a presentation by the Grand Island Central School District for a possible $25 million capital project. (Photo by Larry Austin)

Sat, Oct 6th 2018 07:00 am
By Larry Austin
Island Dispatch Editor
A building condition survey of the Grand Island Central School District has helped identify district needs to be addressed by a possible capital project of $22 million to $25 million.
The district held a capital project forum Thursday night in the Grand Viking Theater of Grand Island High School. Superintendent of Schools Brian Graham said the capital project forum would help determine, "Are we in the ballpark? Are we doing something that makes sense and will the community support it."
A district committee of teachers, administrators, board members and consultants met for the last 10 months from October until August, he said.
"After all of that work, this committee is saying that we need to do a capital project that addresses safety and security first and foremost," Graham said, "address the needs of our buildings to improve health and welfare, to improve the maintenance, and to improve our programs."
Graham said every school district in New York state is required to do a building condition survey every five years. The district hired Young and Wright Architectural to conduct the most recent survey, visiting every building.
Among the projects described:
•Over $1 million to secures entrances at Grand Island High School and Veronica Connor Middle School. The VCMS remodeling would take the main office and swap it with three existing classrooms to build a secure vestibule and main office. Through an active shooter training exercise in May, which simulated a shooter intruding into the schools, the school district identified "improvements based on what we assessed," Graham said.
•Replace roofs at Sidway Elementary School and Kaegebein Elementary School.
•Improve heating and add air conditioning, with air conditioning at Huth Road Elementary School's auditorium and Sidway Elementary School's cafeteria, and the cafeteria in GIHS.
•Add bathroom/water to the high school/middle school music wing.
•Upgrades to the Grand Viking Theater at Grand Island High School.
•$9 million to add a multipurpose synthetic turf behind the high school for sports, including softball and baseball.
Graham reminded the public present that the Board of Education has not approved any project yet and would consider the proposal and the feedback from the forum at its meeting Tuesday.
State money would fund about 74 percent of the cost of a project, Graham added, "So your taxes going to the state come back to us for a facility like this."
Preliminary figures estimate the tax impact on a $180,000 home is an increase of around $15 to $16 a year, Graham said.
•••
The next regular meeting of the Grand Island Board of Education will take place at 7:30 p.m. Tuesday, Oct. 9, in the Professional Development Room of Grand Island High School, 1100 Ransom Road.
Board of Education meetings air on Time Warner Cable Channel 22.
Board of Education Trustees
Categories
Dispatch Dispatch feature Home feature NFP