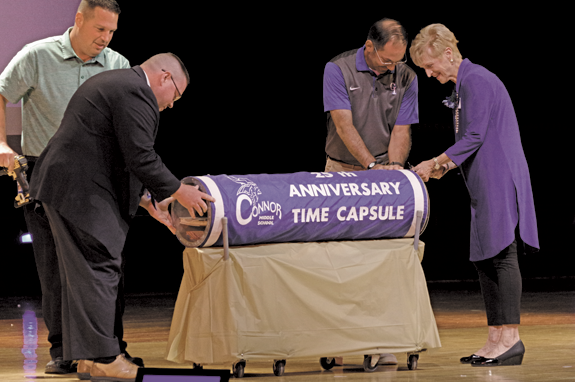 Current Veronica Connor Middle School Principal John Fitzpatrick and past principal Agnes Becker open a time capsule sealed 25 years ago. Below, teachers partied like it was 1968 during the 50th anniversary celebration of Connor Middle School. (Photos by Larry Austin)

Sat, Sep 22nd 2018 07:00 am
On Veronica Connor's 108th birthday, the Grand Island Central School District celebrated the 50th anniversary of the middle school that bears her name.
Sept. 17, students assembled in the high school Grand Viking Theater to take a trip back in time. They heard about the history of their school from current Principal John Fitzpatrick, took part school trivia contests, and watched Fitzpatrick and past principal Agnes Becker open the 25th anniversary time capsule.
"You are the stars of our school. It's because of you, your energy, your hard work, your determination, your positive attitude, your commitment and always your effort that we do what we are called to do," Fitzpatrick told the middle schoolers.
Fitzpatrick also recognized retired VCMS teachers who returned to their old school.
Superintendent of Schools Dr. Brian Graham said rather than brick and mortar, it is teachers and staff that make the middle school "a building that shapes an outstanding place for our students to learn and to grow."
The celebration helped students learn about the history of the middle school and the people who for 50 years have "helped build the best middle school in Western New York," Graham said.
Between 1953 and 1963, Island schools were "bursting at the seams," Fitzpatrick said, and even when the high school opened in 1963, the plans for a middle school was already on the horizon.
Work on Grand Island Middle School was completed and the school opened in April in 1969. It was in December of 1996 that the building was dedicated to Connor, the supervising principal who oversaw development of the school district from a series of one-room schoolhouses to a modern education system.
Fitzpatrick said "connecting the past to the present, having our retirees and former teachers and staff to join us, to honor them, and then connecting that to honoring our present day students."
"Past, present, we're one, still," Fitzpatrick said. "The thing that we all have in common is this middle school," Fitzpatrick said.
One thing hasn't changed, Becker noticed.
"It's still the middle school," Becker said after the celebration. "It's still the enthusiasm of the staff and the kids. That's the way it was 25 years ago, and I still see it." 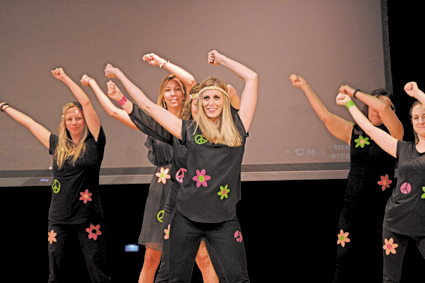