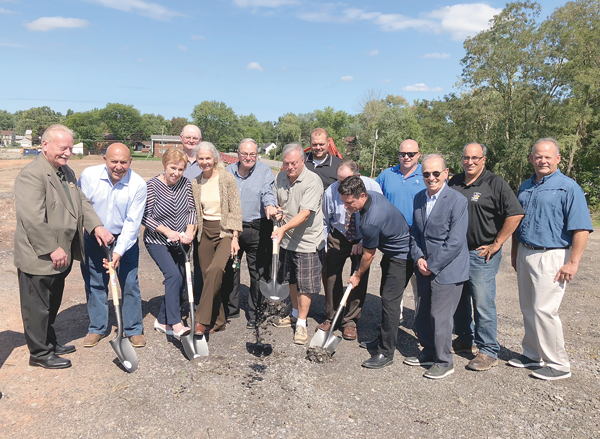 Sat, Sep 15th 2018 07:00 am
Article and photos by Joshua Maloni
Managing Editor
On Thursday afternoon, coworkers and local elected leaders joined Ellicott Development CEO William Paladino as he broke ground on property overlooking a new plaza project. His company, in 2012, purchased a 4.1-acre parcel of land at Center, North Eighth and Onondaga streets. Three buildings offering a mix of commercial and culinary tenants, as well as rental spaces, are expected to open in the next year.
Paladino said ground clearing continues and construction has commenced, but "We have a lot more work to do, from a financing and tenancy prospective.
"From a timing standpoint, we hope by spring of 2019 we'll have our first tenancies occupying some of the buildings here. We hope by the end of the summer that the majority of the complex will be leased out. Since people have seen the work going on out here and heard the project restarted already (after some zoning-related delays), we've got a lot of interest again in the project."
Paladino didn't offer specific details on signed or potential tenants, but said he thinks people will be "really happy with what the finished product is."
Village of Lewiston Mayor Anne Welch said, "This long-awaited development is going to be an asset to the village, and I can't wait to see it completed.
"While on the Planning Commission, we worked diligently on the project and asked Bill to make many design changes, and he complied without question. Thank you for investing in our village, and thank you for your patience during the development process. It was a pleasure working with you."
"It's been definitely a long time coming," Paladino said. He noted his company has been interested in Lewiston since 1996, when Realtor Mike Johnson first reached out to him.
"It's a unique community," Paladino said. "There's a lot of good people up here. I've got a lot of good friends up here. I have for a long time. And we've had a lot of interest up here over the years."
His plaza plan was met with opposition from some residents who didn't want such a large project, and from business owners leery of competition. The development would be the village's third plaza (or fourth, if one counts the Cayuga Street mini-mall), and the first major commercial development on the north side of Center Street.
"Unfortunately, the process we've endured here (with numerous revisions and board meetings) (has left us with) limited interest right now, I'll say. But now that the process is starting, now that the process has been approved, now that the construction has started, we are getting renewed interest from people now," Paladino said. 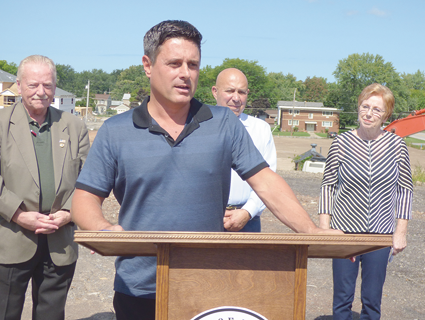 William Paladino addresses the crowd on Thursday at the future site of Ellicott Development's plaza. Behind him, from left, are Mike Johnson, Assemblyman Angelo Morinello and Mayor Anne Welch.
He noted the plaza project "wouldn't have happened without Anne Welch. I can't say enough about her. I think she's going to be a great mayor for this community for a long, long time. When I was getting really pessimistic about the process and what was going on, she steered me straight again a few times here to keep the process moving. I'm very appreciative of that."
Paladino said all three units will be constructed concurrently, and there is a good chance one or two buildings will open while the rest of the plaza is completed.
"We're celebrating something great today," said Niagara River Region Chamber of Commerce President Jennifer Pauly. "I know that our office has been busy with inquiries wanting to know what's going on. We see all the action, and action is progress, and they are excited about that." 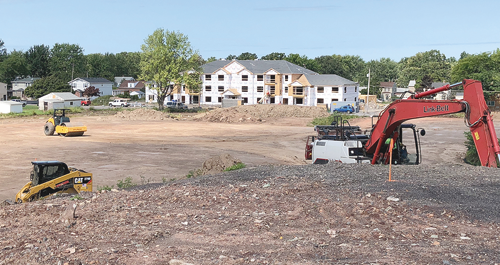 Construction crews are hard at work on both the plaza site, front, and at 765 Fairchild Place, the apartment and townhouse development across the street. 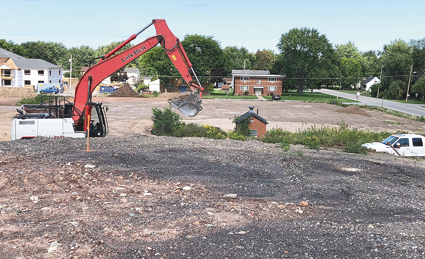 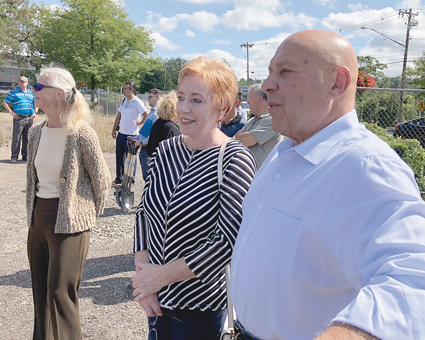