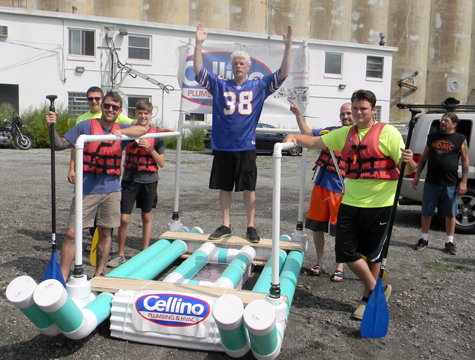 2018 Great Contraption Race a fun event, despite some challenges

Fri, Aug 24th 2018 06:15 pm
By Terry Duffy
Editor-in-Chief
The 2018 version of the Great Contraption Race took off for an overall successful day from its new digs last Saturday on the Buffalo River.
Held earlier on the lower Niagara River off Lewiston, the inaugural Buffalo River run may have been smaller in size compared to earlier races, but it ranked well in fun and excitement. Volunteer organizers with the It Happened to Alexa Foundation managed to handle a few unforeseen glitches with ease.
"We had a morning full of challenges to begin with - the heavy rains overnight, my broken ankle, and then having a medical emergency at the launch site that morning - and those are just a couple of the challenges we experienced! Yet, despite all the challenges we had that day, it really ended up being a fun day. The participants had a great time and are already looking forward to next year," said Kate Fowler, It Happened to Alexa Foundation executive director. "As with any first year event, there are things that went well and things that, let's say, came out of left field, but everyone rolled with the changes and that is what makes a successful event."
The race included a visit from Buffalo Bills Alumni members Jeff Nixon and Lou Piccone, who stopped by the Silo City Paddling launch site to encourage the race participants on as they maneuvered their creations into a windswept and busy Buffalo River.
Despite the conditions, virtually all participants managed to complete the first GCR in Buffalo, which concluded with an awards celebration at Buffalo Riverworks.
The Cellino Plumbing team, which created a Buffalo Bills-themed contraption - complete with goal posts - drew the praise of Nixon (pictured) and Piccone and went on to win the People's Choice Award. Results for the other race entries were incomplete.
"Cellino Plumbing, you guys did a great job and thanks for rolling with the challenges. Can't wait to see what you come with next year!" Fowler said.
For more information on It Happened to Alexa and GCR, visit www.ithappenedtoalexa.org or on Facebook. (Photos by Terry Duffy) 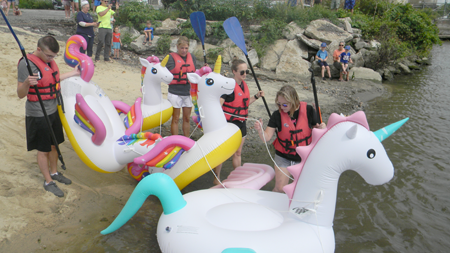 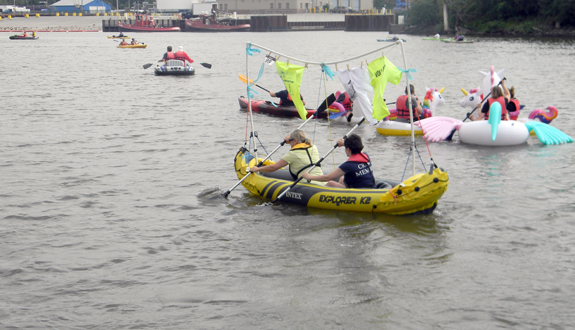