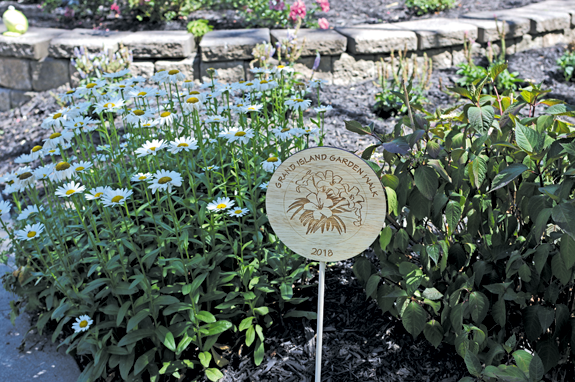 Sat, Jul 14th 2018 07:00 am
By Larry Austin
Island Dispatch Editor
The welcome mats at 13 properties on Grand Island were laid out for residents Sunday in the third annual Garden Walk.
Garden Walkers toured Island yards for as much as six hours after picking up maps at the Town Commons. Four of the 13 stops on the tour were new to the 2018 GI Garden Walk.
A repeat stop on the tour this year was the Kaegebein courtyard, created by students, teachers, and staff with the help of the U.S. Fish and Wildlife Service and volunteers such as employees at Thermo Fisher Scientific. Kaegebein's courtyard included a pollinator garden and garden beds of vegetables.
Kassie Kurtzhalts and Lindsay Greer, rising fifth-graders at Kaegebein, gave Garden Walkers a guided tour of the school courtyard, which serves as an extension of the classroom where students learned about Iroquois culture and the three sisters: Corn, beans, and squash. "So in here, the beans wrap around the corn, which will cause shade for the squash to grow under," Kassie explained to one visitor.
Kassie and Lindsay pointed out, among other plants, Queen Anne's lace, black-eyed Susans, ironweed, and swamp milkweed, the last a home for Monarch butterfly larvae.
"And we have some eggs on it already," Kassie said of Kaegebein's milkweed.
Another stop on the Garden Walk unlike any other, and likewise a classroom of a sort, was the Alt Farm, a sixth-generation residence of Nicole Gerber and Dave Reilly. Learning stations at the farm showed how "plant guilding" works. Guilds are groups of plants and animals interwoven into the system of mutual support. Ecosystems are cooperative places where "microbes build soil, soil nourishes plants, plants feed animals, and animals disperse seed and leave their waste and corpses to be transformed by microbes into soil," Alt Farm learning stations said. Gerber said the Alt Farm stop on the Garden Walk was also a working example of how to simultaneously improve homes for both people and creatures: food and water sources, shelter/cover, logs on the ground, mud for nest building, and native plants in the garden beds that produce nectar, pollen or berries for birds. 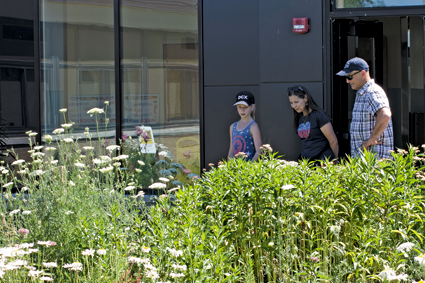