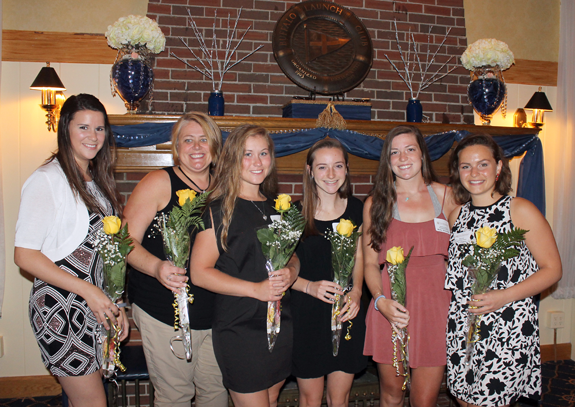 Sat, Jul 14th 2018 07:00 am
By Linda Isenhart and Karen Keefe
Zonta Club Of Grand Island
The Zonta Club of Grand Island awarded five scholarships at its annual scholarship awards dinner held on June 26 at the Buffalo Launch Club.
Veronica Connor Scholarships were awarded to Claire Brandon, Hallie Mingoia and Sara Wolcott, members of the Grand Island High School Class of 2018, and Mollie Shoemick, a 2018 graduate of Sacred Heart Academy. The scholarships are awarded in memory of the late educator Veronica Connor, for whom the Grand Island middle school is named.
The Memorial Scholarship was awarded to Ashley Gugino, a recent graduate of Niagara University who will be attending graduate school in the fall.
Zonta's scholarship committee carefully reads each application and essay, looking for such qualities as academic excellence, motivation, commitment to family, community involvement and leadership potential.
Veronica Connor Scholarships
For this year's Veronica Connor Scholarships, Zonta is proud to announce the selection of four extraordinary graduating seniors who reflect these values.
Brandon plans to pursue a career as a physical education teacher at the State University of New York at Cortland.
Mingoia plans to attend the State University of New York at Albany, majoring in actuarial sciences/applied math, which basically means ... a whole lot of math! She plans to become an actuary or mathematician.
Shoemick will attend Nazareth College in Rochester to study physical therapy, with a career goal of becoming a physical therapist, an athletic trainer or a chiropractor.
Wolcott will attend Roberts Wesleyan College in Rochester. Her goal is to be a high school English teacher.
Memorial Scholarship recipient
Gugino, a recent Niagara University graduate in biochemistry, received an NU award for Outstanding Academic Achievement and was on the dean's list for all seven semesters. She will be a first-year medical student this fall at the University at Buffalo.
Guest Speaker
Kaitlyn Affuso, a 2010 GIHS grad, received her bachelor's degree in 2013 from SUNY Plattsburgh, where she majored in English writing arts, with a minor in journalism. She currently is a content editor for Synacor, a technology and services company in Buffalo. She encouraged this year's scholarship winners to overcome any obstacles to pursue their dreams.
The Grand Island Zonta Club has awarded more than $126,000 in scholarships to women since its founding 60 years ago. The club continues to be on the front lines of the fight for women's equal rights through local and global projects that promote economic self-sufficiency, political equality, access to education and health care and the prevention of violence against women.
Zonta International, which celebrates its centennial in 2019, envisions a world in which women's rights are recognized as human rights and every woman is able to reach her full potential.
Categories
Dispatch Dispatch feature NFP School
comments powered by Disqus