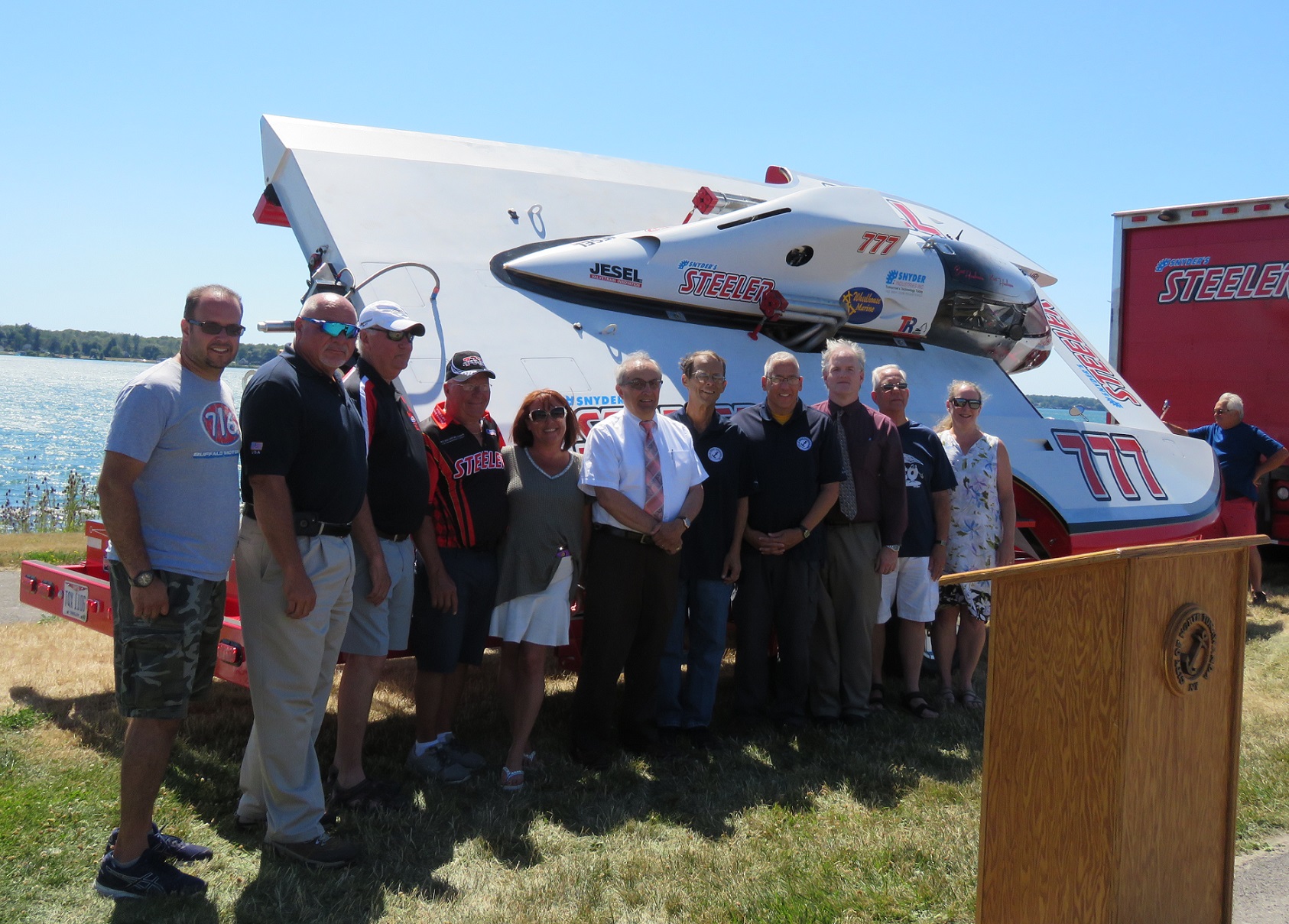 North Tonawanda city officials and Thunder on the Niagara sponsors pose for a group picture following Monday's press conference. In the background is an example of a hydroplane that will take the Niagara River for the event. (Photo by David Yarger)

Thunder on the Niagara to return to NT for 13th year

by yarger
Mon, Jul 9th 2018 06:00 pm
Speed boats to roar on the Niagara River once again
By David Yarger
Tribune Editor
North Tonawanda Mayor Arthur Pappas couldn't believe it had been a year since announcing the last Thunder on the Niagara boat races, but on Monday afternoon, he revealed the family-fun show would make its return to Gratwick Riverside Park Saturday, Aug. 4 to Sunday, Aug. 5.
The show, highly known as "the fastest show on water," features over 70 race boat teams and hydroplanes which glide along the river at approximately 170 miles per hour. Teams come to compete from across the United States and Canada.
Gratwick Park will open at 8 a.m., as the first race begins at 9 a.m. Parking will be available at the park for a $10 donation, which includes a race program. Portions of the parking fee will benefit the Twin Cities Community Outreach.
Pappas was thrilled for the return of the Niagara River classic.
"They're going at speeds up to 170 miles per hour," Pappas said. "Most of us have never been on the water at those kind of speeds. I can't even imagine it, but it sure is a lot of fun to watch. And it draws so many families and it's such a great family event that it's something once you have it here, you want to keep it here."
The event is scheduled to host a car show on Saturday, sky divers on Sunday and a kids zone both days. Food and beverage vendors will also be on hand.
Pappas added the park venue makes for an interesting setup, where attendees can see all forms of transportation in one day.
"That's one thing about this park - you get to see every mode of transportation in one afternoon. You see cars, you see boats, you see planes, you see a train going by all the time and you see kayaks. No matter what it is, you'll see it that day," Pappas said.
Tom Snyder of Snyder Industries, a major sponsor of the event, was happy to make the return to North Tonawanda.
"It's pretty exciting to be involved in this type of racing," Snyder said. "It's a great family event where you come and spend the whole day. ... We're looking to burning up some methanol and putting on a show for everybody."
Pappas ended by commenting on the joint relationship between the U.S. and Canada with the event.
"What a great thing between Canadians and Americans," Pappas said. "When you see the sky diving, between the American skydiver and (the Canadian) that's a sight in itself. It's just a beautiful sight. ... It just shows a unity that you don't always see."
For more information on the Thunder on the Niagara event, visit the race's Facebook page.
Categories
Home feature NFP Tribune feature Tribune HP Feature Picture