Sat, Jul 7th 2018 07:00 am
By Larry Austin
Island Dispatch Editor
The contractor that provides garbage pickup for the Town of Grand Island is catching up on its work, the Town Board was told Monday.
Delayed garbage pickups have caused a flood of resident complaints to Town Hall. At a work session meeting in Town Hall, Town Engineer Bob Westfall told the board the issue has been "a trying bit of time" for the contractor, Republic Services, who "felt they were finally getting to a better position" this week in more efficient garbage pickup as more equipment came online and new employees were hired.
Westfall said the town received "One of the smallest reports" of what hasn't been picked up that day. "We're literally seeing them coming out of a hole that they were in. They were down on equipment. They were down on manpower," he said.
Town Supervisor Nathan McMurray attributed the problem to older trucks and manpower shortages. "It's hard to find people that are both qualified and responsible enough to do it in a safe manner," he said of the work.
Overall, garbage is being picked up every week, McMurray said, and it's getting better.
Grand Island Town Hall
The Grand Island Town Board issued a town proclamation Monday setting July 7, 2018, as a day to commemorate the 50th anniversary of the Grand Island Town Hall.
During its monthly meeting, the board made a proclamation that noted that Town Supervisor H.B. Ransom purchased the land for the first Town Hall, and in 1875, the first Town Hall was built as "a central gathering place for parties, meetings, and dances." To accommodate population growth of the early 20th century, the town officials decided to build a new Town Hall, located out on the current Town Commons.
The second Town Hall's "distinctive cupola was used as a lookout during World War II, and though the second Town Hall was demolished to make room for the current building, the cupola was saved," the proclamation said.
In the 1960s, the proclamation said, "citizens and officials began to consider expanding the town facilities yet again, which became a contentious issue until a majority voted in favor of the proposed plans, and the current Town Hall was erected in 1968."
On the 50th anniversary of the current Town Hall, where Monday's meeting was held, the supervisor's office and the town's Historic Preservation Advisory Board plan a celebration with a "Birthday Bash." In making the proclamation, the board invited all residents to attend the birthday celebration at 1 p.m. on Saturday, July 7, at Town Hall, 2255 Baseline Road, to enjoy a short presentation, light refreshments, and a display of historic photos. 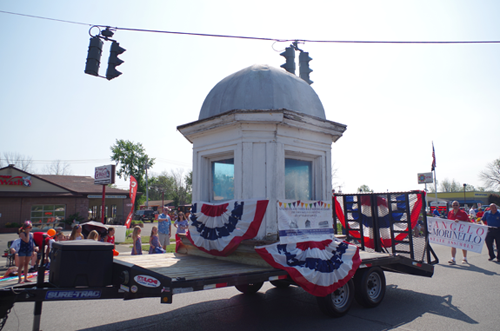 Pictured above, the historic cupola was part of the Independence Day Parade Wednesday. Below, the Town Board presents the proclamation to members of the Historic Preservation Advisory Board. From left: Councilman Peter Marston Jr., Councilwoman Beverly Kinney, Town Supervisor Nathan McMurray, June License and Sharon Nichols of the Historic Preservation Advisory Board, Councilwoman Jennifer Baney and Councilman Michael Madigan. (Photo by Larry Austin) 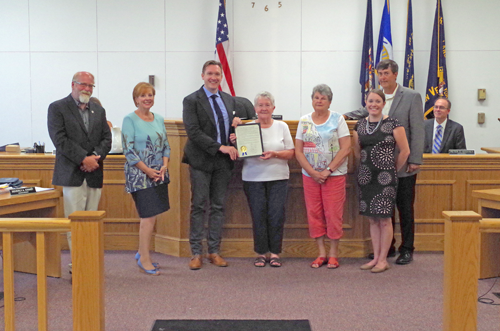