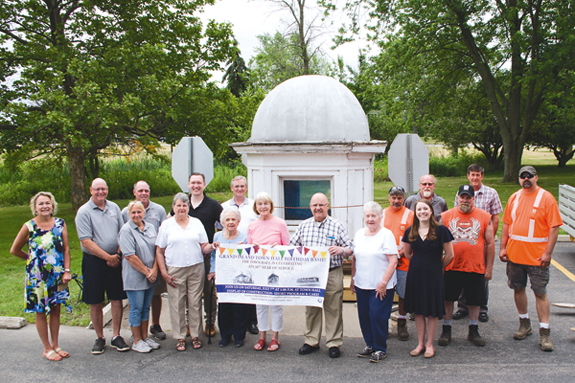 Sat, Jun 23rd 2018 07:00 am
By Larry Austin
Island Dispatch Editor
Fifty years after the demolition of old Town Hall, the historic cupola that sat atop the building has been returned to the Baseline Road campus of Island government.
The cupola was sitting on a berm in the back of Kelly's Country Store since it was moved there in May of 1968, said Town Historian Jodi Robinson. The Kelly family, the town's Historic Preservation Advisory Board, and the Grand Island Highway Department worked together to have the cupola, the only thing preserved from the old Town Hall, returned this week to the new Town Hall parking lot.
The move comes just weeks ahead of the "Grand Island Town Hall Birthday Bash!" celebrating the 50th year of service for the present Town Hall. The party will take place at new Town Hall at 1 p.m. Saturday, July 7.
The old cupola, at approximately 100 years of age, will make a good talking point for the celebration. Old Town Hall was originally built as a schoolhouse in 1918 in a location that is now the front yard of present day Town Hall.
The late Walt Kelly of Kelly's Country Store saved the cupola from demolition. The day the Town Hall came down, Walt Kelly made arrangements to have it shipped up Grand Island Boulevard to his now famous red store.
"My grandfather, when he saw it coming down, he said, 'I have a perfect spot for the cupola over at the Country Store,' " explained Kevin Kelly. "He wanted to keep it."
"That week, we moved it over there."
The cupola is on loan from store. Town Highway Department personnel first assisted with moving the cupola off the berm and on to a new base. Robinson said the cupola was in rough shape from laying on the dirt for so many years.
A motto of Kelly's Country Store, from an old advertisement in an Island Dispatch from 1963, was "Things of the Past."
"That's how my grandfather thought," Kevin Kelly said. "He was just like Walt Disney. He was way ahead. ... He just thought it was part of Grand Island and I think that's what he wanted to keep. It was important."
Categories
Dispatch Dispatch feature NFP