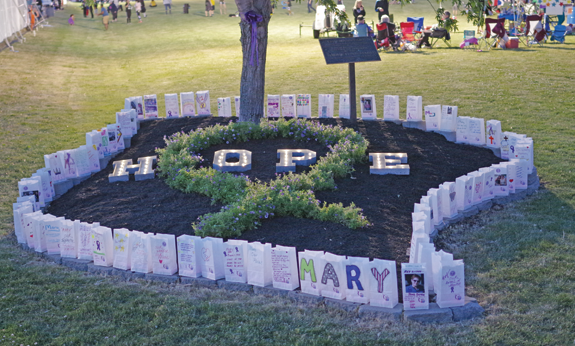 Luminaria bags honor those who have lost their lives to cancer, including Mary Dunbar-Daluisio, longtime Grand Island Relay For Life chair who died in October. June 8 at Veterans Park marked the first Grand Island Relay without her.

Sat, Jun 16th 2018 07:00 am
By Larry Austin
Island Dispatch Editor
Mary Dunbar-Daluisio's spirit of hope was felt Friday, June 8, in the first Grand Island Relay For Life since her passing.
The longtime chair of the Grand Island Relay was recalled in the opening ceremony of the 2018 event, the 16th annual on the Island. Relay For Life, the signature fundraiser for the American Cancer Society, celebrates survivors, supports those under treatment, and symbolizes their fight against cancer.
Lynn Dingey, one of Dunbar-Daluisio's successors as chair of the event, said that she recently found herself in possession of a tote belonging to Dunbar-Daluisio, and in it found "Mary's book of mojo," a binder from Relay For Life 2011.
Dingey read a message from the book written in Dunbar-Daluisio's handwriting, that said, "You all have virtues that stand the test of time. You all understand that behind every face is a battle. ... All with a battle of your own, but you put them aside to show compassion to others through Relay. That compassion gives strength, and strength brings courage. Courage brings hope. You show compassion, you bring hope."
Dingey said, "Mary loved her family and friends, including her Relay family, and showered all of us with compassion and hope on a daily basis. She will be forever in our hearts as we continue the fight to find a cure in our lifetime."
GI Relay is hoping to establish a memorial bench in Dunbar-Daluisio's honor at Veterans Park, home of the GI Relay, Dingey said.
Mariah Turk of the American Cancer Society announced at the Relay opening ceremony that GI had raised more than $70,000 of its $100,000 fundraising goal for 2018. Less than a week later, that total had surged to more than $89,000. 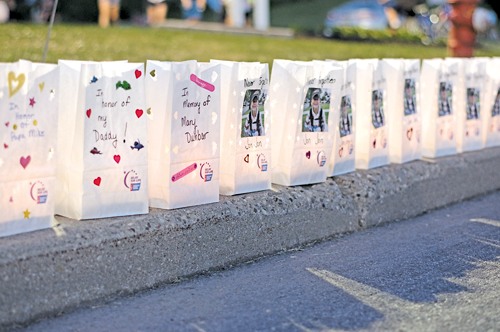