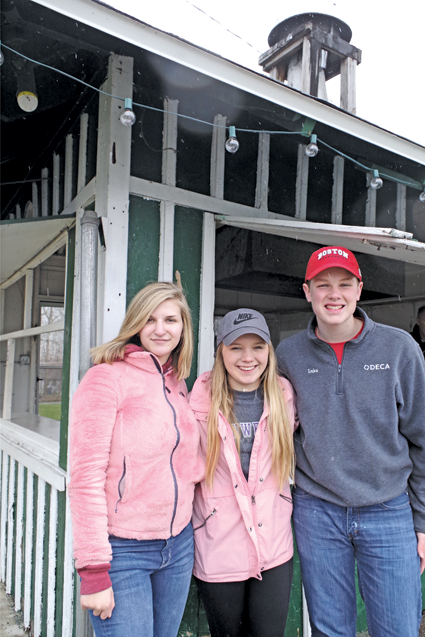 Sat, May 26th 2018 12:00 pm
By Larry Austin
Island Dispatch Editor
Instead of looking for summer work like other people their age, three teenagers from Grand Island High School have spent much of their spring preparing to be their own bosses.
Gabby Bergstrom, Luke Hess, and Lauren Merletti will hold a Memorial Day weekend opening for their new eatery, Casey's Cabana, in Ferry Village.
The name of the business follows the same naming convention as the GIHS school store, Casey's Corner, and the Masters Field concession stand, Casey's Counter. All three students are members of DECA, the school's business club.
Bergstrom said the idea to open their own business had its genesis when they saw an online advertisement to rent the small Bedell House building property. They "were toying with the idea for a while and then we just decided, why not?" Bergstrom said.
"For a while we were joking around about it and then we were like, 'Wait, this could be something real."
In February and March, serious planning began on a trip to Rochester for the DECA conference.
"We made it official on a bus ride home from states," Merletti said. "We spent two-and-a-half hours planning it."
Bergstrom said the personalities in the partnership mesh.
"We always knew we wanted to work together on one team," Hess said. "And we've always made a good team with everything we do."
The trio knows that previous eateries run out of the shack have been short-lived. Hess said their group will emphasize customer service and consistent hours.
"We want to make it a fun environment," Bergstrom added, saying the Cabana will have a Hawaiian theme with music.
"We're going to bring them to a paradise here," Hess said. With dockside dining, "You can enjoy the beauty of the Niagara River."
The business should pay dividends with the experience earned, they said.
"We want the experience, too, because we want to take this on to our future careers in business," Hess said. Instead of working for someone else in the summer, Merletti said, they'll learn how to own a business and manage it themselves. They'll have some things teenagers never have to worry about.
"We have to learn how to do payroll," Bergstrom said. "We're going to have employees."
"And taxes!" Hess said.
"Banks especially don't really want us to open a business account with them because you have to be 18 to have a credit card," Bergstrom lamented. "Everything's a hassle when you're a minor. Nothing's easy."
The three are persistent, though, and have thanked the adults helping them navigate around the potholes
"Greg Kaiser at M&T has been a really big help," Bergstrom said. "They don't really have any situations like this, but he's been super helpful in trying to help create something that's going to work for us." C.J. Girard of the Grand Island Chamber of Commerce and Ryan McCarthy, a social media advisor, have also supported them, they said.
Categories
Dispatch NFP Top News Features