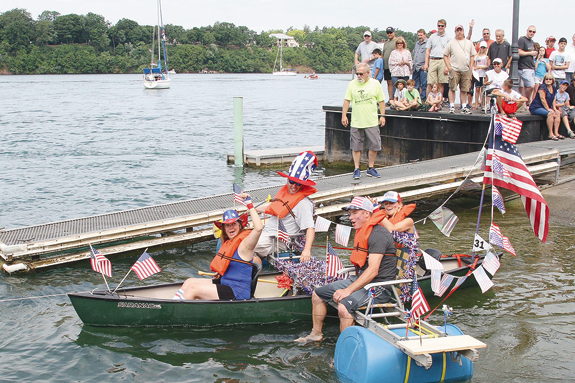 A work in progress for Alexa Foundation: Move to Buffalo has brought challenges for Great Contraption Race

Sat, May 26th 2018 07:00 am
By Terry Duffy
Editor-in-Chief
Planning - albeit slowly - continues for this year's Great Contraption Race.
The event is an undertaking of the It Happened to Alexa Foundation. Preparations for the 2018 version of GCR - much like the relocation of the foundation itself - remain a work in progress from Lewiston to Buffalo.
And it hasn't been easy.
Foundation Executive Director Dr. Kate Fowler said the much-discussed process of relocating its headquarters from Center Street to the Larkin at Exchange, 726 Exchange St., in Buffalo, continues to move along. First announced in late January with an anticipated move-in timeframe of April, then changed to May, Fowler said IHTAF now aims to be in its all-new, expanded Larkin digs by early June.
"Our new move-in date is now June 4. We may plan for an open house in early July to give us time to get in and settled. So far, the June 4 date is sticking, so fingers crossed it will stay!" Fowler said.
In the meantime, Fowler and IHTAF remain busy with planning for the Great Contraption Race. It was announced to take place June 10 on the Buffalo River, then rescheduled to Saturday, Aug. 18. Fowler said the new date is now set, but that a host of logistics remains a work in progress. The Buffalo Riverworks waterfront complex on Ganson Street is signed on and will serve as the end location of the 1.25-mile Buffalo River GCR, with a host of activities including the awards presentation and various social events.
But the search continues for a suitable launch area, as well as finalizing permit agreements with the U.S. Coast Guard. Fowler said finding a starting point for race participants remains an obstacle. Unlike the lower Niagara River, the Buffalo River is a multi-use, narrow, winding waterway that is busy with maritime users of all types and sizes, particularly in the summer months. Finding a location to accommodate the GCR launch site with all its considerations for participants, watercrafts, vehicles and the like has not proven easy.
"The place we were hoping to launch from called me ... and said we couldn't use it. I called another place and am waiting to hear," Fowler said. "Once that is finalized then we can get the course all set. We will be pulling the boats at the end from another site closer to Riverworks."
She said the search continues, with sites still to be checked out at the Bison City Rod and Gun Club and nearby DEC docks. And requests for others continue.
Fowler said securing the needed Coast Guard permits also remains a work in progress, but, overall, things are going well on that end.
"I've talked with the Coast Guard quite a bit and there doesn't seem like any indication there are any concerns so far. So it's in progress," she said.
Fowler explained interest from throughout Buffalo-Niagara continues to build for this year's event.
"Interest has been great! We have two sponsors so far and a few more we are working on," she said. "We have a lot of interest from the people we've talked about it with. No sign ups yet, as the information isn't solid yet. (But) I'm hoping to have everything set (soon)."
Fowler said the 2018 Great Contraption Race participation packet is just about complete and expected to be finalized for release shortly, with plenty of info contained for interested race participants.
Regarding actual construction, she said the change in venue from the wider Lower Niagara River to the narrow, much busier Buffalo River has brought new considerations, particularly regarding the type of craft permitted and suggested construction of the contraptions. She noted that, with the narrowness of the waterway, the use of additional race vehicles such as towboats and jet-skis is limited.
"Safety is our No. 1 concern. The Buffalo River is an extremely busy waterway and not only do we want everyone to have a great race, we want everyone to be safe and be good neighbors to the other businesses and people using the waterway," Fowler said.
For those interested in participating in this summer's GCR, Fowler said a detailed race packet is expected to be available in early June. Included will be information pertaining to the types of craft permitted, as well as materials allowed, guidelines for participants and details on liability waivers.
She said GCR organizers are planning for a June meeting update at a Lewiston location. Visit www.ithappenedtoalexa.org for more information.
Categories
NFP Sentinel Sentinel feature Sentinel HP Feature Picture