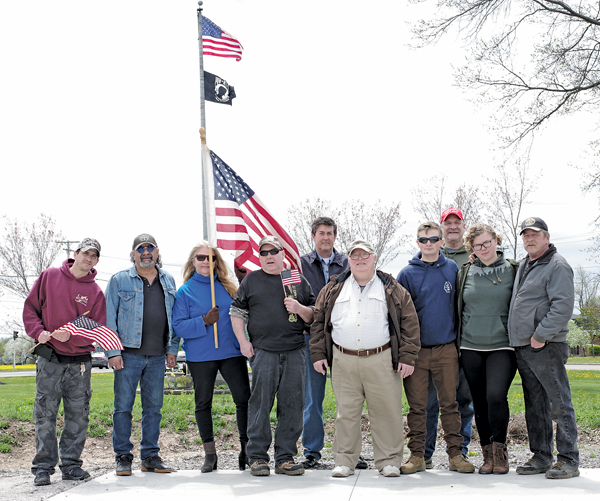 Supporters of the DeGlopper Memorial expansion stand on the cement pad where a statue of Charles DeGlopper will be located. They met there Saturday to protest a denial of funding from the Buffalo and Erie County Greenway Fund Standing Committee. One member of the committee reportedly objected to the statue holding a rifle. (Photo by Larry Austin)

Sat, May 19th 2018 07:00 am
By Larry Austin
Island Dispatch Editor
As work continues on the expansion of the DeGlopper Memorial in the center of Grand Island, about a dozen people held a peaceful gathering in the park to show their support for a statue depicting Charles DeGlopper with a rifle.
Overall plans for the park are "a wonderful idea," said one supporter Saturday, David Mokhiber of Lewiston. But like others who visited the park Saturday, he was dismayed by reports that a member of the Buffalo and Erie County Greenway Fund Standing Committee opposed contributing funds to the project because plans include a statue of DeGlopper holding his Browning rifle.
"I guess it's their prerogative, but it's ridiculous," Mokhiber said of the decision. Mokhiber likened the committee's action to trying to posthumously disarm DeGlopper. "The man fought with a gun, he was shot with a gun and killed."
DeGlopper posthumously received the Medal of Honor for his actions in the D-Day invasion. During the Battle at La Fiere, the American troops tried to take the bridge over the Merderet River near St. Mere Eglise. When DeGlopper and his fellow American soldiers were pinned down in a roadside ditch, under heavy fire and in extreme danger. DeGlopper made a one-man assault on German positions, which cost him his life, but allowed his fellow soldiers to retreat and later take the bridge.
"He used that gun to protect all those men. That's why he got the Medal of Honor," Mokhiber said.
The park annually hosts the town's Memorial Day observance when the town honors those service members, including those killed in action. Rus Thompson, a well-known Second Amendment advocate who helped organize the protest, pointed out another hypocrisy in the decision, noting that the park has also been home to a real WWII-era Howitzer for years without any complaints.
Mokhiber said, "A lot of people obviously don't know the story, and the kids don't learn this in school, and they should know who the real heroes are of this country - the young men and women that give their lives for our protection and rights as citizens."
Categories
Dispatch Dispatch feature Home feature NFP